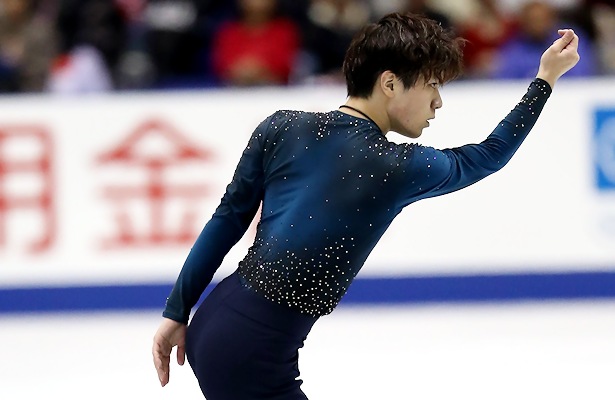 Shoma Uno captured his third consecutive national title this weekend at the 2018-19 Japanese Figure Skating Championships in Osaka on Monday night. Despite uncertainties about his condition heading into the free skate, Uno retained his sizeable short program lead and won the overall competition with a clear victory margin of nearly 50 points. Daisuke Takahashi hung on to second place after difficulties in the free skate to win the silver medal, while Keiji Tanaka rose from fourth place to earn his third medal at the national championships, a bronze.

Fresh off of a silver from the Grand Prix Final in Vancouver, Uno led the men’s field at the event with a commanding performance of Stairway to Heaven. Only three clean quads were executed in the entirety of the men’s short program, two of which were Uno’s quad flip and quad toe (the third was a quad toe landed by Shun Sato). This, along with his fiery and intense interpretation of the music, vaulted Uno to first place in the short program with a score of 102.06 and secured him a dominant lead of roughly 14 points.

However, it was not completely smooth sailing for the Olympic silver medalist. In his elegant and solemn free skate to Moonlight Sonata, Uno opened with three shaky jumping passes, but overcame these mistakes with a solid second-half of the program where he landed a quad toe-double toe, a triple Axel, a triple Axel-Euler-triple flip, and a triple loop. Because he popped his planned quad Salchow into a triple, the skater opted to switch out his last jumping pass, an intended triple Salchow-triple toe combination, for a triple loop. The skater was only able to execute two jump combinations, along with other minor mistakes, and showed visible relief at the end of his program.

Though the 21-year-old kept silent amidst speculations of an injury during the competition, Uno later admitted his right ankle had been sprained in a bad fall the morning of the short program and was later seen receiving medical attention after the free skate. With a free skate score of 187.01 and a total score of 289.10, Uno won both the free skate and the overall men’s competition, earning his third national title and a guaranteed spot to the 2019 Four Continents and World Figure Skating Championships.

All eyes were on Takahashi as he returned to the national stage after a five-year hiatus. His last trip to Japanese Nationals in 2013, where he finished fifth, was hindered by a troubling knee injury, and he announced his retirement from competitive skating later in October 2014. This year, in an off-season announcement, the 31-year-old voiced a sense of unfulfillment due to how his career had ended and made it his goal for this season to return to Japanese Nationals once again. The 2010 Olympic bronze medalist returned to competition at the 2018 Kinki Regionals, where he placed third with a score of 195.82, and later went on to win Western Sectionals with 244.67 points.

In Osaka, Takahashi’s enchanting short program, choreographed by David Wilson, to the melodic Pale Sheltering Sky consisted of four clean triples as well as strong spins and footwork, making the crowd cheer as he received his score of 88.52 for second place.

Takahashi had indicated that he wished to re-introduce a quad jump back into his free skate set to the dramatic and eerie music from Pale Green Ghosts, choreographed by Benoit Richaud.  Although the skater had landed several successful quad toes in practice sessions earlier this week as well as the six-minute warm-up today, he ended up popping his quad toe attempt into a triple during his free skate. Further mistakes included a hand down on his triple flip, a fall on his triple Lutz-Euler-triple Salchow, a two-footed landing on a popped triple loop, and a step out on a second triple flip (+REP). Although far from perfect, the five-time national champion showcased his signature artistry and maturity in his choreography and performance, and while he only placed fourth in the free skate (151.10), his total score of 239.62 won him the silver medal.

After opening his season with a bronze medal at the Ondrej Nepela Trophy, Tanaka faltered on the Grand Prix circuit where he placed eighth at both of his assignments. The two-time Japanese national silver medalist sought to continue his national medal streak in Osaka, however a fall on his opening quad Salchow in his Gary Moore short program had him trailing the top three men with a score of 79.32, approximately one point behind Koshiro Shimada.

With his fourth place finish in the short program segment and a clear shot at the podium, Tanaka rallied in his free skate to the “Overture” from William Tell where he landed a clean quad Salchow-double toe combination as his first jumping pass. Even with a doubling of his second quad Salchow and an invalid double toe in his last jump combination, Tanaka came second in the free skate with 157.13 points and earned the bronze medal with a total score of 236.45.

In his emotional short program to music from the Cinema Paradiso soundtrack, Kazuki Tomono struggled with his opening quad Salchow, which he fell on and underrotated. He recovered quickly to land a triple flip-triple toe and a triple Axel which earned him a score of 73.09. His free skate to the crowd-pleaser Riverdance got the crowd clapping along to the energetic beat and his enthusiastic performance. Although Tomono had a fall on his second quad Salchow attempt, a step out on his second triple Axel, and two under-rotation calls, he was able to place third in the free skate with 154.37 points. Despite his valiant efforts in the free skate, he ended up missing the podium by nine points and placed fourth with a total score of 227.46.

The newly-minted 2018 Junior Grand Prix Final bronze medalist Shimada produced a clean program to take third place in the short program segment with a score of 80.46 behind Takahashi. Coached by Stéphane Lambiel, Shimada skated to Adios by Benjamin Clementine and cleanly executed a triple Axel, a triple flip, and a triple Lutz-triple toe, all of which received positive grades of execution. Several mistakes in his Adios Nonino free skate, including popping both of his planned quads into doubles and lost levels on his spins, dropped him to 11th in the free skate segment; however, his short program score kept him in fifth place with a total score of 219.78.

Uno, Tanaka and Tomono will compete at the Four Continents Championships. Uno and Tanaka will also be joining Yuzuru Hanyu at the World Figure Skating Championships.

Takahashi declined any offer to be named to the Four Continents or World team.

Shimada and Tsuboi were both named to the World Junior team.