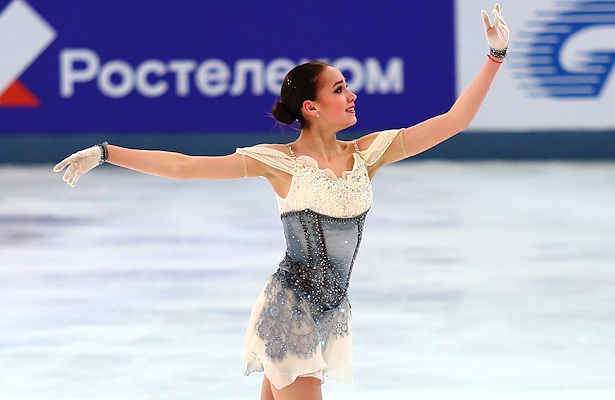 Performing to music from The Phantom of the Opera, Zagitova nailed her triple Lutz-triple loop combination, double Axel and triple flip, showing off difficult jump entries and exits. The European Champion collected all level fours for her spins and footwork to score 80.62 points.

“I am satisfied with my short program today, but there is still room to grow,” the 16-year-old said. “I try not to think about it (the attention she gets) and just want to skate as usual, but in some ways, it even helps me.”

Trusova, who wore a new costume, was excellent in her dynamic program to music from the Kill Bill soundtrack, hitting a double Axel, triple flip and triple Lutz-triple loop combination as well. Her technical score was slightly higher as she did the combination in the second half, while Zagitova does the triple flip as her next-to-last element. Trusova earned 74.96 points.

“I’m pleased with the performance, but there is something to improve and I will work on that,” she said.

Kostornaia’s program to “Departure” and “November” by Max Richter was highlighted by a big double Axel (she is currently training the triple Axel), triple flip, triple Lutz and beautiful spins, but she fell in her footwork.

“I think I was already too relaxed,” the ISU Junior Grand Prix Final Champion admitted. “I had done the jumps and there was just a little bit left (of the program). That’s why that happened.”

The top three all train in Eteri Tutberidze’s group. “We feel comfortable together,” Trusova said. “We are rivals on the ice, but friends off he ice,” she added.

“There is rivalry, of course,” agreed Kostornaia. “We are a group of athletes and not a recreational group after all.”

Medvedeva, who debuted a new short program to “Tosca” was a major disappointment. Although she looked good in practice, she struggled with her combination, under-rotating the triple flip and singling the toe and fell then on the double Axel. That sub-par performance left her in 14th place with 62.24 points.

“It might sound strange, but I feel better than in France (at the Grand Prix),” she commented. “It still was a step forward today. Now I will have time to get my body and my skating in order.”