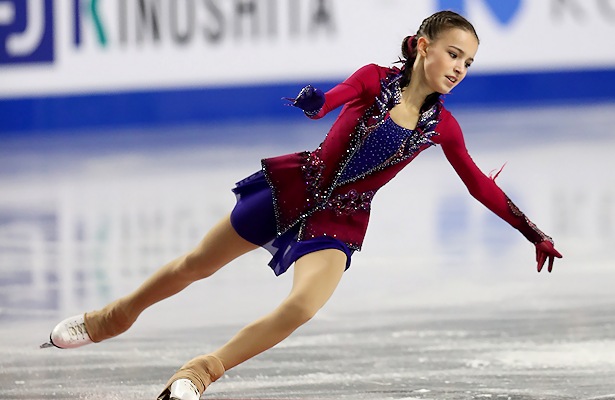 Russia’s Anna Shcherbakova is the first lady to land two quad Lutzes in a single program (second stage of the 2018 National Russian Cup).

Anna Shcherbakova took many by surprise when she won the title at Russian Nationals (senior level) in her debut at the event. The ladies’ competition at this event is incredibly competitive, and big names such as Olympic Champion Alina Zagitova and two-time World Champion Evgenia Medvedeva were competing, but when they faltered, Shcherbakova seized the opportunity. The delicate 14-year-old put out two clean, stunning performances and landed a quad Lutz in the Free Skating to rise from fifth to first place.

Not only were the media and spectators taken by surprise, but the skater herself as well. “Honestly, I still don’t realize what has happened. I just know that I skated well and I’m happy about that,” said the quiet, but well-spoken teen.

One reason her victory came as a surprise may have been that the Muscovite had finished off the podium at the ISU Junior Grand Prix of Figure Skating Final while Alena Kostornaia won and Alexandra Trusova placed second. Kostornaia came third at Nationals while Trusova was second.

“To me, it was very important to skate clean here (at Nationals),” said Shcherbakova, explaining that she had changed her approach at Nationals and was more focused. “That was the main goal. Especially after the unfortunate performances at the Junior Grand Prix Final, I wanted to skate clean even more.”

The quad Lutz that she had landed before at national events didn’t work  at the Junior Final, where she even tried two of them in the long program. Shcherbakova, together with Trusova, is currently the only female skater in the world performing a quad Lutz in competition. Both train with Eteri Tutberidze, Daniil Gleikhengauz and Sergei Dudakov.

The Lutz wasn’t the first quad Shcherbakova landed. “I used to do the quad toe before, therefore I knew that I would try quads at the end of the season after the competitions,” she explained. “Possibly, we just realized that the Lutz now is going better (than the toe), that we can try it now, because it is higher than it was before. We just realized it could work and decided to try it.”

The skater is currently not practicing the quad toe but may work on it again at the end of the season.

When Trusova started doing quads in competition last season, some observers, especially men, had a hard time accepting that girls are doing quads and even said that quads should be left to male skaters. Shcherbakova just smiled when asked about that.

“I think if we can do it (quads), why should we not try it?” she commented. “If we have the ability, we want to show it. The fact that we are girls doesn’t change that we can jump.”

It should be noted that Shcherbakova is the first lady to land two quad Lutzes in a single program (free skate at the second stage of the 2018 National Russian Cup). The first Lutz was in combination with a triple toe (step out). The second was a solo Lutz.

Shcherbakova described how she trained for the quads. “First, you need to prepare for it in the right way,” she began. “We’re always training this jump with a safety net (on the harness) in the beginning to feel if you can do it or if you can’t. When you can do it, you do it without safety net, but it is important to overcome this psychological barrier to not be afraid to go for the jump. If you are scared, it won’t work.”

Falls happen, but the new Russian Champion is not scared of them. “When we’re learning and training the jump, we usually wear padded pants, so it doesn’t hurt when we fall,” she said. “But basically, if you do it the right way technically, the falls are not that painful. Obviously, it doesn’t go without some bruises.”

Shcherbakova looks up to Mao Asada, “because she combined beautiful skating with difficult jumps,” but she also admires Boyang Jin. “A few years ago, I saw Boyang Jin for the first time,” the teenager offered. “I liked him and I watched him competing. He also does the quad Lutz. When he started doing the quad Lutz, it seemed like he was doing something impossible. Now people get used to it, but you need to understand how difficult it is.”

Shcherbakova’s rise is even more remarkable as she came back from a bad injury. She broke her leg when doing a triple loop in combination at their training camp during the summer of 2017 and missed the ISU Junior Grand Prix series that season. The skater felt a lot of support from her family, coaches and the Figure Skating Federation of Russia, which helped her to come back.

“I knew that they were waiting for me,” said the skater. “Daniil Markovich (Gleikhengauz) visited me and presented me with a huge teddy bear. I knew I could come back and they would help me to recover. I didn’t think about stopping, because I got all that support.”

The skater, who had followed her older sister into the sport, came back in fall 2017. “It happened all step by step,” Shcherbakova recalled. “At first, I was training only off the ice, then on the ice. I was just stroking for a long time and then we started with the jumps, first singles, then doubles. For a week, I jumped only with a safety net (harness). The coaches helped me to get the jumps back — a big thank you to them! When we got the triples back, I did them for a long time with the safety wire so there was no fear.”

The ISU Junior Grand Prix Finalist enjoys skating a lot. “I like this whole process, everything that happens on the ice, just to skate and to learn jumps, to try new ones. I feel very at home (on the ice), because I’ve been skating since childhood. I just enjoy the feeling of skating and jumping.”

Since Shcherbakova is not age-eligible for international senior-level events, Russian Junior Nationals, which will be held next month in Perm, is her next important competition as she wants to qualify for the ISU World Junior Figure Skating Championships in March. The skater said she is not letting pressure or expectations get to her. “I try to focus on each competition the same way, independently of which competition that is,” she said.