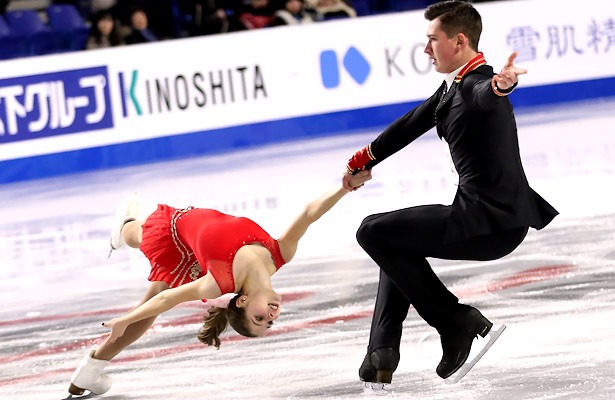 The future looks bright for the Russian junior pair team of Anastasia Mishina and Aleksandr Galliamov who won the 2018-19 Junior Grand Prix (JGP) Final and proved that even an early bird and a night owl can be successful together. The team from St. Petersburg also had a strong showing at Russian Nationals last month.

Since joining forces in early 2017, Mishina, 17, and Galliamov, 19, have progressed quickly. Just a year after teaming up, they claimed the bronze at the 2018 ISU World Junior Figure Skating Championships. This season, they won their two Junior Grand Prix events in Bratislava and Richmond and also came first in their international senior debut at the Inge Solar Memorial–Alpen Trophy before claiming the Junior Final title in Vancouver, showing consistency in their performances throughout. Last month, the team finished a respectable fifth at the Russian National Championships and have been named as substitutes for Europeans.

“We are overall pleased with how we skated at Nationals,” Galliamov said. “We had to change the content of the short program and also add something (a lift) in the long program in a very short time (following the Junior Final). We basically managed.”

Their only mistake came when Mishina fell on the first jump in their triple Salchow-Euler-triple Salchow combination in the long program. “It was not a typical mistake for us,” Mishina noted. “Usually we do this combination well and I think everything will be fine at Junior Nationals. We are working on that.”

Russian Junior Nationals in early February is the next stop for the JGP Final Champions, and it is an important one as the event serves as the main qualifier for the 2019 ISU World Junior Figure Skating Championships in Zagreb, Croatia, in March. With the deep pairs’ field in Russia, more than three teams have a shot at making the team for Junior Worlds. Alone, five Russian junior pairs had qualified and competed at the JGP Final in Vancouver.

Two of Mishina and Galliamov’s closest rivals train with them in the same group in the St. Petersburg Figure Skating Academy under the same coaching team of Liudmila and Nikolai Velikov and their grandson Vasilii: Polina Kostiukovich/Dmitrii Ialin and Ksenia Akhanteva/Valerii Kolesov. They came second and fourth in the Junior Final that a Russian journalist jokingly called the “Open Velikov group championship.”

“We’re very proud that three teams of our school made it to the Final,” Mishina shared.

“We have a rather big training group and we split the ice time,” Galliamov explained. “We are skating only together with Valerii and Ksenia, while Dima and Polina are on another ice. We have two sub-groups, at first one sub-group is skating and then the other one.”

The atmosphere in the group is competitive, but friendly. “It is not like we are the best friends, but we socialize, we’re friends, and sometimes we’re hanging out together,” Mishina pointed out and credits the coaches for creating a healthy atmosphere.

“Our group is friendly with each other and we’re friends,” Galliamov agreed. “It is not like my competitor is my enemy.”

Mishina and Galliamov mostly work with Liudmila Velikova, while Vasilii Velikov is the head coach of the other two top teams, and Nikolai Velikov especially takes care of the new teams in the group that currently consists of eight pairs.

The 2018 World Junior bronze medalists are pleased with the first half of their season. “We started well into the season,” Galliamov noted. “After the World (Junior) Championships (2018), we did not relax. It was nice that we were on the podium, but we wanted to improve further.”

The team kept their upbeat short program to “Party Like a Russian” after trying two other pieces of music that didn’t really work for them. The long program, set to the soundtrack of the movie adaptation of the famous Russian novel Master and Margarita, is new. It was Mishina’s idea to skate to this music.

“At first, I read the novel and I went to see the musical,” she explained. “I really liked it and I suggested this idea to the coaches. They already had this music. There are different music pieces from the musical and the movie, and the coaches picked what worked best.”

Galliamov approved of the choice, although he had some doubts in the beginning. “I thought that it would not be easy for me, and when we mounted the program, I couldn’t imagine how we would skate this because this is another level for us compared to our previous free skate. We broke in the program and got used to it. I like this character a lot and feel comfortable to perform it.”

Galliamov, more comfortable with the program, now feels that it is well balanced with a lyrical and a more dynamic part.

The skaters are quite opposite in their personalities, starting with her being a morning person and him being more of a night person. “Nastia is a lark and I’m a night owl,” Galliamov said with a smile. Sometimes that is difficult to balance in training.

Should a conflict arise in training, they don’t let go it too far.

“It doesn’t get us anywhere,” Galliamov said. “We don’t forget that so we can work well in the future and that there aren’t any disagreements.”

The coaches decided to team them up when Mishina’s former partner, Vladislav Mirzoev, split up with her not long after the team won the 2016 JGP Final. Mirzoev also struggled with injuries. That split upset Mishina a lot at the time.

“For me, the change (of partner) was quite hard, because from the sky – maybe not from the sky, but still, it was down to earth,” Mishina recalled. “I was alone, and for about three months, I was skating by myself. I had no motivation and I even put on some weight. Then I had to get back into shape, get the jumps back and all elements, like from the beginning.”

When Galliamov became available at the end of February 2017, the new team went to work right away and had to change some technical aspects, notably in the throws. “I didn’t have the correct throw technique,” he said. “I worked with heavy balls on the ice and threw them to understand the rhythm …,” he started. “So that the partner doesn’t get killed,” Mishina interrupted with a laugh.

Off the ice, the skaters are in their last year of school and plan to study sports at the Lesgaft University in St. Petersburg. Galliamov actually went to a law college for three years, but wants to switch to sports studies now. “I graduated from a law college, a secondary-level education, but now I want to go to the sports institute and get a degree. I have to pass the EGE (Unified National Exam), then I can inscribe,” he explained. He sees his future connected to figure skating more than to law.

Mishina wants to follow in her coach’s footsteps. “I want to be like Liudmila Georgievna (Velikova),” she stated. “I will try very hard. I don’t know how it will work out, but I hope it will happen.”