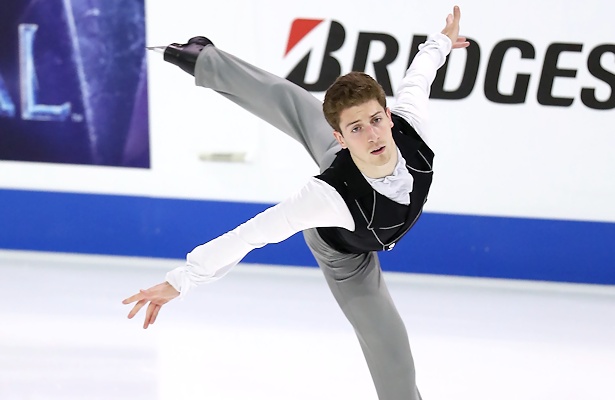 Morisi Kvitelashvili of Georgia skated right into figure skating history when he earned the silver medal at the 2018 ISU Grand Prix of Figure Skating event Rostelecom Cup in Moscow last November, becoming the first Georgian to win a medal on the senior-level Grand Prix circuit. He delivered two solid performances and skated much better than at his first Grand Prix Skate America, where he came in eighth.

“I think it is a breakthrough for me,” Kvitelashvili said about taking the silver at Rostelecom Cup. “To have won my first medal at the Grand Prix is a big achievement for me. Obviously, I don’t want to let go that now and want to continue in the same spirit and in the same direction. This gives me confidence in myself.”

The athlete received many congratulations and messages. “The atmosphere at the Grand Prix was unreal,” the 23-year-old said. “I felt the support of everyone, people wrote to me and I tried to answer to everyone and to thank them. Their support truly helped me, thank you to everyone!”

Overall, Kvitelashvili sees progress in his skating this season after finishing fourth at Nepela Trophy and third at Finlandia Trophy before the Grand Prix Series.

“The first competition (Nepela Trophy) was for preparation, the second (Finlandia Trophy) went much better,” he said. “The third competition (Skate America) we approached not in very good shape, maybe because there were many competitions in a row. There was not much time in between the competitions, only about a week. So physically and mentally, I was not ready and lost my form.”

Kvitelashvili felt more ready at Rostelecom Cup. “When I am feeling ready physically, it is easier to skate,” he explained. “I feel much more confident, and in my program, I understand how to go into the jumps and stay in control. I won’t go into it looking for the jump. When you’re ready functionally, you can prepare also technically and perform well.”

The Muscovite went on to win the Bosphorus Cup in Istanbul, which was a smaller competition.

Kvitelashvili was born and raised in Russia as the son of Georgian immigrants and skated for Russia until the end of 2015 before deciding to represent his “historical home country” as he puts it. He has been training under Eteri Tutberidze and her team for a year and has shown a lot of promise, but often lacked consistency. Improving his consistency is something the 2018 Olympian has worked on a lot.

“In each competition, I am trying to control the whole process and to go into each jump with a clear mind so I don’t make any serious errors and not to miss the jump,” he explained. “I am preparing myself and it is working so far. I know exactly that everybody is nervous in competition. Nervousness is never an excuse when I skate poorly. You need to keep a clear head and control the process, then it will work out.”

Following the Bosphorus Cup at the end of November, Kvitelashvili started focusing on his preparation for the ISU European Figure Skating Championships this month.

“After Turkey, I returned to Moscow and resumed training right away,” he revealed. “We’re trying to continue to work on the elements, the choreography, the components and on the clean execution of the elements in order to earn plusses for them.”

There was only a short break for the Georgian over the New Year holidays which he spent with his family.

The skater knows that clean programs have become more important with the introduction of the broader range of Grade of Execution (GOE) from -5 to +5 and feels that taking risks with quads is not rewarded anymore.

“Mistakes are punished severely,” Kvitelashvili noted. “You can feel that. You take a risk, go for a quad and when it doesn’t work, you’ll lose many points. It can be even better to do a well-executed triple with (positive GOE). Then you’ll get more points than doing a quad that is not clean with an error. Nevertheless, I’m continuing to do quads and I won’t change that. I think it is a loss of masculine skating (not doing quads).”

The Rostelecom Cup silver medalist has the quad Salchow and toe in his repertoire. He tried the quad flip, but it is not ready yet for competition and he feels it is because of problems with his technique. Kvitelashvili trains with the Russian “quad queens,” Alexandra Trusova and Anna Shcherbakova, who have landed the quad Lutz in competition, and he is impressed by them.

“It is motivating that these little girls can do these hard jumps,” he said, adding with a laugh that he should be able to do them since they can. “Two girls in our group do the quad Lutz in the free skating. Obviously, you’re watching and you enjoy it. This is spectacular! ”

While the public focus is on Tutberidze’s strong squad of girls, Kvitelashvili does not feel neglected. “Everyone gets attention and everyone is treated equally in the group,” he said. “It is not like that there is more time for someone and less time for someone else.”

In this season’s programs, Kvitelashvili is portraying an artist. The Short Program is set to “Bloodstream” by Tokio Myers, a combination of classical and modern music, and the skater is portraying a writer that is full of ideas. In the Free Skating to music from Mozart, l’opéra rock, he takes the role of composer and musician Wolfgang Amadeus Mozart.

“He has ideas, something is happening in his life, something works out and something doesn’t,” the Georgian shared about the character of his Free Skating. “But in the end, because of all the pressure, he takes poison and dies. It’s a sad but interesting story.”

Kvitelashvili is active on social media and tries to answer messages his fans write to him. He is also open to criticism. “Even from negative comments, I can draw sometimes conclusions,” he said. “Praise is nice, but I’m also looking at negative comments. Maybe they see a mistake and I want to find this mistake that maybe me and the coaches don’t see and fix it. Everybody has a different perspective.”

The skater is now in his final phase of preparations for Europeans. He did not make any changes to his programs. “We continue to work in the same rhythm, said Kvitelashvili. “The preparation is going smartly, diligently and full steam. We’re giving it all to show the best skating I’m ready to fight for the highest placements and I’ll try to do everything that I’ve planned.”