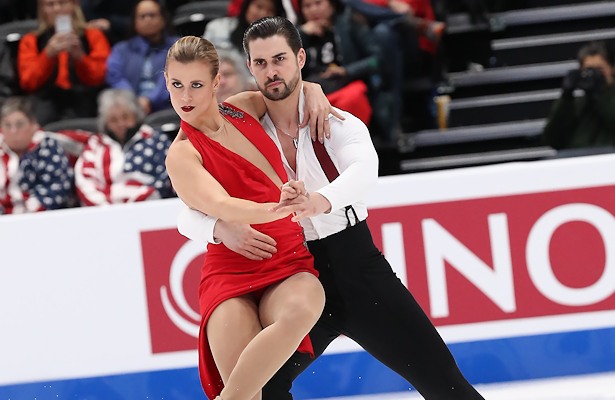 USA’s Madison Hubbell and Zachary Donohue took the lead in the Rhythm Dance at the 2019 Four Continents Figure Skating Championships on Friday afternoon, while teammates Madison Chock and Evan Bates placed second. Canadian champions Kaitlyn Weaver and Andrew Poje are in a close third, and there are few points separating the top three teams.

Hubbell and Donohue showed intensity in their tango, producing rock solid twizzles right out the gate which earned very high grades of execution (GOE). The 2018-19 Grand Prix Final Champions earned a level 2 and 3 on their Tango Romantica patterns, meeting five of the eight key points. While their crowd-pleasing curve lift was graded a level 4, their midline steps were only given a level 2. They team scored a new season’s best of 81.95, improving slightly from their last outing in Vancouver.

“We’re very pleased,” said Hubbell. “I think we’ve been putting in so much work this season, and we’ve improved so much, and it’s testament to that. It wasn’t our best performance, and I especially quite shaky, had a lot of stumbles here and there. But we were able to show exactly how hard we’ve been working and still obtain our season’s best score, even though it wasn’t technically very strong. Overall, we are very happy with where we’re standing. We’re looking forward to our free dance.”

“We were lucky because this year,” said Donohue of their training. “We were able to take Skate Canada and Skate America, the same kind of schedule, less than a week in between, so we kind of know what to expect. It was more about maintaining the level of confidence in our program, not letting us rest too much and lose that bit of cardio work. So for coming into this, it was really just about going through the run-throughs, taking time to heal, rest, to get us ready, because I think mentally we are there.”

Chock and Bates put out a fierce tango, opening with level 4 circular steps. The 2019 U.S. silver medalists earned a level 4 and 3 on their tango patterns, meeting seven of the eight key points. Their solid twizzles and intense rotational lift were graded a level 4, earning high GOES, and they were awarded 81.17 points. The team had the highest Total Element Score of the segment (44.78).

“We feel very pleased,” said Chock. “It was very fun to skate out there today and the crowd was very receptive to our performance and we just had a really good time; it went by so quickly.”

“Our coaches have done a very good job of preparing us,” she added on preparing for the event. “We’ve never done such an intense competition schedule, especially coming back after ten months off (due to her injury), but we feel more prepared than ever. We’re very comfortable with our programs and we have a lot of fun every time we skate them.”

“We’ve done a lot of work to prepare for three competitions in a short period of time, this being the third, and I feel like we’re building each time we compete,” added Bates. “This rhythm dance is the best of the year so far.”

Skating to “Libertango,” Weaver and Poje opened with smooth level 4 and 3 tango patterns, meeting all eight key points. The 2019 Canadian champions also delivered a level 4 straightline lift and diagonal steps, however, his twizzles were graded a level 3. Nevertheless, they scored a season’s best of 80.56 points, topping their score from 2018 Autumn Classic earlier this season where they won gold.

“Today’s performance was good, even if it wasn’t our best, we definitely have things we want to move forwards on,” said Poje. “But we’re looking forwards to putting out another good performance with the free dance.”

“We were able to practice our competitive programs but it is different when you have a panel of judges watching,” said Weaver of missing out on the Grand Prix while touring. “This is a great stepping stone towards our ultimate goal, Worlds. The preparation was very different: we slept on a bus for six weeks, we trained on small ice for 30mins a day sometimes less. We learned how to be smart with our training so we can arrive at this part of the season feeling very fresh and excited.”

Canada’s Piper Gilles and Paul Poirier opened their tango with level 3 patterns, meeting six of the eight key points. The 2018 Skate Canada bronze medalists also produced a nice level 4 rotational lift in their smooth routine, but her twizzles were graded a level 3 as were the circular steps. They finished fourth with a score of 78.05 points.

“We have had some problems with the levels on Tango Romantica and we have made some improvements and are pleased with them despite where we may end up in the standings,” said Poirier.

Gilles added: “We are really pushing to be on the World podium this year and it would be just as special on Four Continents podium because the two of us haven’t been on the podium since 2014.”

USA’s Kaitlin Hawayek and Jean-Luc Baker showed solid level 4 twizzles, but only met three of the eight key points in their patterns which were graded level 1 and 2. Nevertheless, the 2018 NHK Trophy champions were confident in their tango to “Vuelvo al Sur” and “A los Amigo,” showing lots of expression. Their curve lift was graded a level 4 and they scored a new season’s best of 74.42.

“We feel really proud of that performance,” said Hawayek. “Levels aside, we felt it was a huge step up from what we’ve done this season so far. We’re super proud of the consistency that we’re continuing to show and being able to to put out stronger performances each time. Last week, we worked on little nuances, on the storytelling aspect (of the rhythm dance), and I think that it showed in both our components and GOEs today.”

“A lot of the time period last week was just recovering and making sure that we were ready for this week,” said Baker of competing so soon after nationals. “We’re feeling more fresh now.”

In their first international competition representing Canada, Laurence Fournier Beaudry and Nikolaj Soerensen, who used to represent Denmark, finished sixth with 73.30 points. Their tango featured a level 4 curve lift and solid level 4 twizzles, however, they received a one-point music deduction.

“We’re very happy and excited about how we skated,” said Fournier Beaudry. “It was so much emotion and it felt so good to step out there again after such a long time (on the international scene) and perform as we are able to do it.”

“There was no mark on any of the elements, so I’m guessing either choreographic or missing a beat, we’ll check that out,” said Soerensen of the one-point music deduction.”