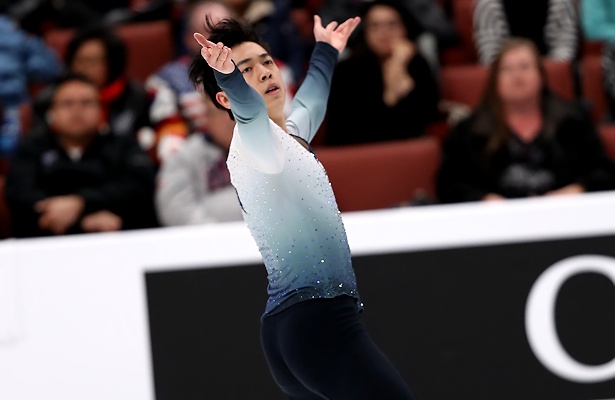 Zhou, who is making his first appearance at this event, was in the zone. The 2018 Tallinn Trophy silver medalist was focused yet showed expression in his routine to music by Muse. He opened with a strong quad Lutz-triple toe, racking up nearly 20 points out the gate. He then followed up with a quad Salchow and triple Axel while displaying strong level 4 spins and footwork throughout. He scored a whopping season’s best of 100.18, topping his score from Tallinn by nearly 23 points.

“This is my first time breaking 100 in the short in an international competition!” acknowledged the 2019 U.S. silver medalist. “I am very happy with this result. It is a reward and a testimony to the hard work I’ve been putting in. I’m becoming more confident in my abilities. I did my jumps with better quality than before I’ve been working on them. I’m proving to myself I can do clean jumps (after struggling with under rotations at the start of the season).”

Cha nailed a quad Salchow which garnered high grades of execution (GOE), along with a triple Lutz-triple loop and triple Axel in his “Cinderella” routine. The 17-year-old earned a season’s best of 97.33, topping his score of 90.33 from earlier this season at 2018 Autumn Classic where he finished second. It is also his first time competing at the Four Continents Championships.

“Actually I’m very happy about my performance tonight, because I had a lot of competitions in a row,” said the 2018-19 Grand Prix bronze medalist. “I didn’t have the chance and time to train as normal  since I had competitions for almost every week. I was nervous today, too, but I think I really tried my best for today’s performance. I’m feel really good now, the score makes me happy, but I also look more at the performance I did.”

Jin was styling in his short to “While My Guitar Gently Weeps.” While the defending champion stepped out of his opening quad Lutz, he rallied back to land a quad toe-double toe and triple Axel while showing level four footwork and spins throughout. The five-time Chinese national champion scored a season’s best of 92.17, improving from his score at his Grand Prix event in Helsinki.

“I’m not quite satisfied with today’s performance, because I’ve been doing pretty well in the practice,” said the 21-year-old from Harbin. “It may be due to my physical condition or the jet lag. It’s already 10 p.m. and I’m actually kind of sleepy now. In my practice this morning, I didn’t quite fulfill my practice goal for the first jump, so I was pushing a little harder in the competition, and it ended up being a little over, so I stepped out. In the second jump of my combination, I think that I went in a little too slow. I think failing two jumps in one short program is a big problem, so I hope to adjust myself to pull out a better skate in the free program.”

Japan’s Shoma Uno had a tight landing on his opening quad toe, and then stepped out of the back end of triple Salchow-triple toe. The 2018 Olympic silver medalist otherwise showed a strong triple Axel and earned level 4s on all other elements. He is currently in fourth with 91.76, but by no means out of any medal contention.

“For the triple-triple on my second jump, I over spun just like I thought I would,” said the 2018 World and Four Continent silver medalist. “Because it was an easier jump, I definitely was frustrated, but I would like to continue working harder.”

Keegan Messing of Canada landed a quad toe-triple toe, but had to hang onto the landing of a triple triple Lutz and triple Axel in his skate to “You’ve Got A Friend In Me.” Nevertheless, the crowd-pleaser from Anchorage, Alaska, showed good footwork and scored 88.18 for fifth place.

“It wasn’t as strong as I was hoping it to be,” said the 2018 Skate Canada silver medalist regarding his performance, “but I stayed on my feet and I can leave happy today. Being in sunny California, coming from cold, snowy Alaska, this is just a beautiful place to be.”

USA’s Jason Brown stepped out and put a hand down on triple Axel, but landed a solid triple flip and triple Lutz-triple toe for sixth place (86.57).

“Besides the (triple) Axel (mistake), I’m very proud of the performance,” said the 2018 Golden Spin champion. “I do it every day in practices, so I’m a bit bummed, but I know it’s going to light another fire within me. I think I slipped off my edge a little bit, but I should have landed it. So to come in and miss that is frustrating, but I’m excited to go into the free program with a clean slate.”

Keiji Tanaka of Japan showed lots of expression in his bluesy routine to “Memories,” landing a triple Lutz-triple toe and triple Axel, but under-rotated and put a hand down on his opening quad Salchow. He was otherwise solid, earning level 4s on all elements to earn a season’s best of 83.93.

“There were some points I wished I put in more,” said the 2019 Japanese national bronze medalist. “I will take that as a miss, but without letting that holding me back, I would like to continue improving so that I can show my power to people watching me.”

Nguyen “tweaked” his right foot in practice which is why he substituted in the triple loop for the flip as his solo jump.

“I was very proud of how I was able to handle myself,” said the two-time and current Canadian champion. “I’m just glad I’m able to continue this positive momentum I have this season.”