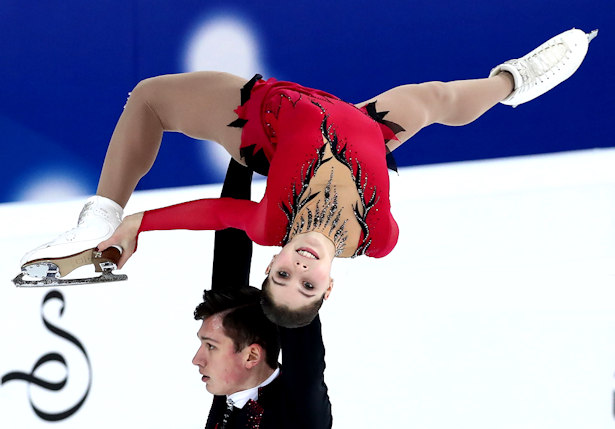 Russian pair skaters Anastasia Mishina, 18, and Aleksandr Galliamov, 19, won each competition they entered last season with the exception of the Russian Nationals where they placed a respectable fifth at the senior level. The talented team is now moving up to the international senior level, although they still have one year of junior eligibility left and are very excited about taking the next step in their career.

“We started to work on it right away, so we wouldn’t lose any time,” Galliamov said. “Our first senior season is ahead of us and our programs need to be polished. That means we have to work even harder.”

“We will skate to music by Lara Fabian,” Mishina revealed. “We picked it, because we want to try a new style. With this music it is comfortable to perfect our skating skills. We like it. As soon as we switched this music on, we realized that we could skate to it with our souls and express the idea choreographically.”

“In the new season, we want to surprise with a new character,” her partner chimed in. However, the duo is not ready yet to reveal the name of the song they’re skating to and want to keep it under wraps until the test skates of the Russian National team that will be held September 7 and 8 in Moscow.

The team decided to keep last year’s Master and Margarita set to the soundtrack by Igor Korniliuk.

“We kept the free, so that we have confidence in our first senior year,” Galliamov explained. “Obviously, we’ll freshen it up, we’re changing the transitions, we’re working on the elements, and we do have new costumes.”

After the skaters went on vacation in May, they went to a training camp in Sochi in June where they also had the opportunity to skate in the Olympic venue “Iceberg”.

“We had to work a lot at the training camp in Sochi, we worked on our physical condition,” Galliamov said. “The sun, the sea and the air gave us energy.”

“The training camp went well,” Mishina agreed. “We worked on our endurance and strengthened our muscles. On the ice, we worked on skating skills and started to work on the elements. This camp was one part of our preparation and the main goal was to get into shape physically.”

Mishina and Galliamov, who are mainly coached by Liudmila Velikova, but also train with her husband Nikolai and their grandson Vasilii, went to their second training camp in Sweden, on July 15.

“Each year in July we are training in the city Lulea,” Galliamov shared. “There is a good training center, familiar surroundings and great ice.”

“We’ll start to do run-throughs of our programs and we will work on the choreography,” added Mishina. 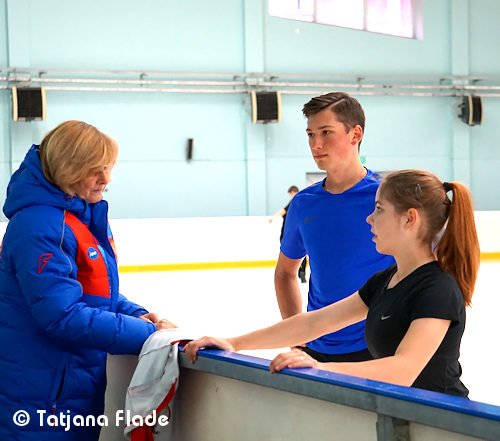 As for the elements, the 2018-19 Junior Grand Prix Final champions are working on some new things, especially with Vasilii Velikov, who was a single skater most of the time in his career.

“We changed the spin and we’re learning new jumps — for example, the triple Lutz. We’ll see how it goes in the season,” Mishina shared. “We are working with our skating skills coach and are getting faster on the ice. We were lacking speed before.”

“We are also paying more attention to footwork, choreography and transitions,” Galliamov summed up, adding that he especially likes the idea of trying new side-by-side jumps.

“However, we need to do these jumps not only in training, but also land them in competition,” he pointed out. “Many people are publishing videos of jumps they do in practice on social media, but you’ve really done it only when you land the jumps in the program in competition. Training and competition are different, mentally. You can do ten out of ten jumps in training and this still is no guarantee that it will be the same in competition. Nevertheless, we need to learn new jumps so we can make our programs harder.”

Mishina feels they need to step up the overall quality of their skating in order to get to the next level.

“We want to improve so that it is not just entry and element, but with transitions and that the program looks complete,” she offered. “The highest class is to combine pair skating and (ice) dance.” “And to jump like the single skaters,” Galliamov quickly added.

The skaters have made changes to their lifts and are interested in learning a quad throw as well, but their coach Liudmila Velikova is against it as she feels the risk of injury is too high.

The national junior champions are looking forward to their first senior season, but they aren’t putting too much pressure on themselves.

“We are prepared to not be at the top in the next season” noted Mishina. “That is normal. We need to get our skating to the senior level, because it is very different from the junior level. Things that we were forgiven in juniors won’t be forgiven in seniors – like inaccuracies in the skating skills and not-so-clean performances. This is reflected in the scores.”

“I think we’ll be calmer, because nobody is expecting anything from us,” she added. “If it works out, great, if it doesn’t, never mind, we’ll continue to work.”

However, her partner countered, “‘What does it mean, nobody is expecting anything from us?’ We did well in juniors after all, and the fans are counting on us and expect decent performances and placements. We don’t set any global goals; we have our goal and we go towards it.”

“Our general goal is to improve the quality our skating, the skating skills, and the transitions so that they are fluid and that it doesn’t look like set-up elements,” Mishina elaborated, “Everything is fluid in the program and it looks like a one-piece.”

Nevertheless, coach Liudmila Velikova feels that her team is ready to take on the seniors.

“We’ll fight our way into the seniors,” she said. “Nastia and Sasha are capable of doing that, but we’ll see how everything works out. It will be very important how we do in our first competitions.”

It was Velikova’s suggestion to keep the long program in order to give them more confidence, especially in light of the fact that the program was already accepted.

“When you do something new, you are always worrying if this program will be accepted or not,” she explained. The coach praised Mishina, in particular.

“She is not a born figure skater,” said Velikova. “She is more built like a skier, but she puts so much soul into each movement that I don’t see any deficits when she skates. She brings me a lot of joy!”

The 2018 CS Inge Solar Memorial champions have been selected for the Grand Prix events in France and in Japan, but they don’t know yet which Challenger Series events they are going to attend.