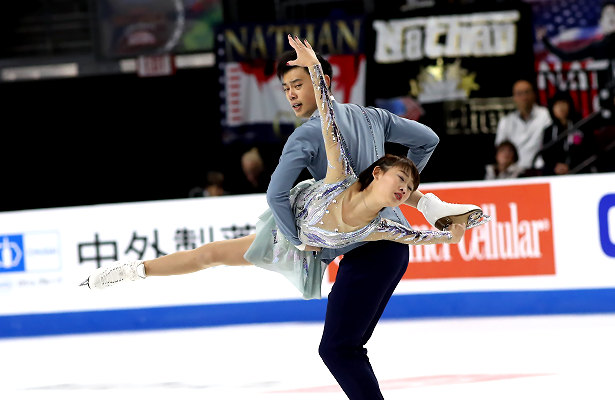 China’s Cheng Peng and Yang Jin maintained their overnight lead to win their first Grand Prix gold as a team at 2019 Skate America on Saturday afternoon in Las Vegas, Nevada. Russia’s Daria Pavliuchenko and Denis Khodykin pocketed the silver, while USA’s Haven Denney and Brandon Frazier rose from fourth to capture the bronze.

Peng and Chen had a bit of rough start when both doubled their side-by-side triple Salchows, but managed to land triple toe-double toes, and a brilliant triple twist. Unfortunately, Peng took a hard fall on the throw triple loop, but recovered to land a throw triple Salchow in their routine to music from the Cloud Atlas soundtrack. The rest of the program was clean and the 2019Four Continents bronze medalists earned many high positive grades of execution (GOE) for their lifts, earning a score of 128.16 for first in free skate and overall (200.89).

“We’ve won several silver medals and we’ve been longing for a gold medal,” said Peng. “We put in a lot of effort and this gold medal is like a new starting point for us and will push us further. Hopefully we’ll win many more gold medals.”

Pavliuchenko and Khodykin finished third in their free skate to music from the Tron Legacy soundtrack, slightly improving their personal best with a score of 125.73. The team from Moscow received an edge call on their opening triple flips, but the triple toe-double toe-double toes were good. Pavliuchenko went down on the throw triple flip, but the throw triple loop was was huge. Their triple twist was graded a level 4, as was the three lifts and pair combination spin. With a total score of 196.98, the 2018-19 Grand Prix finalists managed to hold onto the second spot on the podium.

“It was a good skate, but not our best as I had one big mistake,” Pavliuchenko said.

“We made a step forward in our skating and in our technical elements,” Khodykin added.

Denney and Frazier showed a secure triple twist in the opening of their routine to music from Lion King Returns soundtrack, following up with a throw triple loop and side-by-side triple Salchows. The team struggled on their double Axel combination and the throw triple Salchow was two-footed, but the lifts were excellent and garnered a level 4, as did the forward inside death spiral. The 2019 U.S. silver medalists finished second in the free skate with a new personal best of 127.52, and with a total score of 192.70, easily rose from fourth to third overall.

“Our goal for this program was to be very proactive and mindful of what we were doing and not let anything get taken away from us,” explained Denney. “That’s how bad we want it. We want it so bad and we’re going to fight for everything and not let anything go, so I think we did that today and that’s why we got very emotional during the end of the program.”

It’s been a long series of ups and downs for the former U.S. champions.

“Coming back from injury, we worked so hard at home,” said Denny. “Little moments like this…we wanted to not take anything for granted, and we were really happy we were able to perform like we train at home.”

“A lot of credit [for the lifts] goes to John Zimmerman,” said Frazier. “He’s an artist when it comes to creating new, innovative things when it comes to lifts and transitional skating. Last season, when we started back with him, it was just a building year. We kept the programs more basic to try and get the confidence up. We had a lot more to improve, but that’s what we did. This year, we really opened that door of creativity.”

The 26-year-old admitted to be stubborn during the summer, but finally “bought into everything” and now enjoys and is grateful for what Zimmerman has brought to the table.

“This is just the beginning,” said Frazier. “We really want to bring everything we’ve got, and we know that this is confidence for us. Not just technical for us, but to show that we can bring innovate things to our program without stressing so much about technical. And now we can build from here, and this has been a tough process emotionally. Out there was the first time I felt like we got to the end. It was a fight. We left points on the table, of course, and I’m sure we’re going to go back. But I haven’t felt like that in a long time and I think it was because we worked hard. We know we have so much to bring to our team. It’s not about winning or losing, we just want to show everyone what our potential is. This was the first baby step into building our foundation, so I’m very pleased and happy.”

Teammates Jessica Calalang and Brian Johnson suffered two falls in their routine to “You are the Reason” by Calum Scott  and Leona Lewis. He went down on the side-by-side triple toe-double toes and again on the side-by-side triple Salchows. The only other major error was step out by Calalang on the throw triple Lutz, but the 2018 Tallinn Trophy bronze medalists showed good lifts and spins to earn a new personal best of 119.25 for fourth place in the free skate and overall (180.52).

“Overall, since we got here on Thursday, we really tried to take in the moment,” said Calalang. “This is our first Grand Prix together, enjoying our time out here. We really wanted to show off these programs since it’s a Grand Prix. It’s a little different than, say, Detroit or even a Senior B. It’s nice that we had this experience, but we’re just going to go right into the next one.”

“Any experience is good experience,” added Johnson. “We just have to get out there and do it.”

USA’s Ashley Cain-Gribble and Timothy LeDuc, who stood in third after the short, placed fifth (109.34) in the free skate and slipped to fifth overall (177.54). Cain-Gribble fell on the throw triple Lutz, and popped her jump on the side-by-side triple loops. The team also had to later abort a wobbly group 5 Axel lift. While the were errors were costly, the U.S. champions showed a good throw triple Salchow and a level 4 group 3 lift.

“She’ll [Nina Mozer] have a plan for us coming into France, and she knows that we’re really sad with ourselves right now and all she tells us that it’s okay and we’re going to do it next time,” said Cain-Gribble. “And she’s there for us and so is our coach, Peter Cain. We go back and regroup and we get ready for France. It honestly felt so foreign because we’ve been training extremely well and hard, and I felt like I was just searching for points at that moment and trying to gain back what we had lost. Especially after the loop, my mind felt like it was exploding. We weren’t affected by anything that happened before us and we knew that we could have a strong performance as well. When we went out there with that mindset, we felt connected and I think it just got away from us at that point.”

“This is a great opportunity for us to grow as a team,” said LeDuc. “We always try to look back at every competition and find ways that we can grow and become stronger. Today is a really great opportunity for that. Obviously, we are disappointed with the mistakes we made. We didn’t train to go out and skate like that. We trained really well and pushed ourselves really hard coming into this competition because we wanted to have a great result. We knew there was an opportunity for a great result, so it does sting quite a bit. We know we are so much stronger than that, but
we’re not the first team to go out and have a disappointing performance and we’re not going to be the last. This is a part of sport. This doesn’t change any of our feelings about this season or about our trajectory as a team. It’s just the nature of sport.”