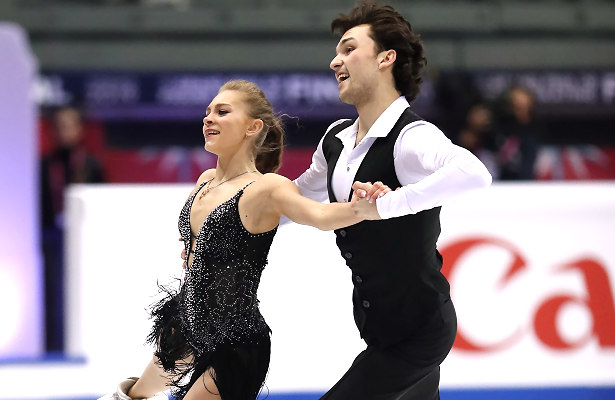 Maria Kazakova and Georgy Reviya of Georgia perform their Rhythm Dance at the 2019-20 Junior Grand Prix Final of Figure Skating.

Georgia’s Maria Kazakova and Georgy Reviya took the lead after the Rhythm Dance, edging out USA’s Avonley Nguyen and Vadym Kolesnik by a mere .04 point in Torino, Italy, on Friday. Russia’s Elizaveta Shanaeva and Devid Naryzhnyy are currently in a close third.

Kazakova and Reviya put out a very good routine to “Take Good Care of My Baby” and “Go Down Moses,” showing level 4 twizzles and meeting four of six of their key points in their level 3 pattern dances. The midline steps were also graded a level 3, while the stationary lift was a level 4. All elements received positive grades of execution (GOE) and the 2019 CS Asian Open Figure Skating Trophy bronze medalists took the lead with a new personal best of 68.76.

“It wasn’t easy today,” said Reviya. “We are very happy with our marks, but not so happy with the skate. We had a few small issues with the twizzles which didn’t go quite as we needed them to, and on a few transitions we lost speed, but we got back into the program quite quickly.”

The team is competing on both the junior and senior circuit this season, with their last senior event at 2019 Volvo Cup where they took silver.

“It’s hard, so hard!” said Reviya. “But the free dance in juniors is easier after skating in seniors. The rhythm dance is actually harder though.”

Nguyen and Kolesnik engaged the audience with their “Aladdin” program, showing level 4 twizzles and a very good rotational lift, however, the midline steps were graded a level 2 as was the first section of her first pattern dance. The team, who won both their Junior Grand Prix (JGP) events, placed a very close second with 68.72 points.

“It felt pretty good out there on the ice,” said Nguyen. “The audience and the crowd really supported us. We just want to do as well as we can and keep improving our programs. We hope the judges like what they see and we hope the people who see us feel something from our skating.”

“We prefer the new “Aladdin” to the old one because it has energy,” she added. “We draw on the vibrancy and energy of the Broadway show in our program.”

“I was a little bit nervous, not like usual,” admitted Kolesnik. “This is a huge event for us, but then this extra pressure helped me and the elements passed by really fast. It was really nice.”

Kolesnik credited coach Igor Shpilband with how they are able too express themselves in the program. “He tells us all the time to do things bigger and better—his favorite words.”

Performing to “Bonnie and Clyde,” Shanaeva and Naryzhnyy also showed strong level 4 twizzles and rotational lift, however, the pattern dances were graded a level 2 for both skaters as were the midline steps. The team from  JGP  Courchevel and Chelyabinsk gold medalists scored 66.21 points for third place.

“We are quite happy with our skate,” said Shanaeva. “It was nice today, the skating was easy, the mood was just right. We were not much more nervous than usual.”

Teammates Elizaveta Khudaiberdieva and Andrey Filatov are close behind with 65.07 points after their smooth routine to music from La La Land which featured close and fast level 4 twizzles and a curve lift.

“We’re pretty pleased,” said Khudaiberdieva. “This was our best Rhythm Dance this season and I am excited and really happy to be back at this competition. I really love the atmosphere.”

While Khudaiberdieva took the bronze last year with former partner Nikita Nazarov, she claims the experience doesn’t make it any easier.

“It adds responsibility, but I am not nervous,” she said. “I have a great partner!

“Every time we get slightly different marks, sometimes higher TES, sometimes higher PCS,” said Filatov of their first season together. “It’s only our fifth or sixth competition, so we are not sure yet what to expect. It’s always a surprise. She is very experienced and that has been a huge help to me in this first half of the season. She helps with how to behave at events and with a lot of different small things, tiny nuances, so I am very grateful to her.”

Loicia Demougeot and Theo Le Mercier of France and placed fifth (62.84). The JGP Courchevel and Baltic Cup silver medalists showed level 2 patterns and midline steps, while the twizzles and lift were a level 4 in their routine to music from Ain’t Misbehavin.

“We are really satisfied with our performance today,” said Demougeot. “We’re happy to compete here and see a lot of the well-known skaters.”

“I think we did our maximum today,” added Mercier. “Of course, I had a little mistake on the step, but that’s okay, everyone does that. For the upcoming Junior World Championships, of course we would like to be on the podium, but we will be happy if we could make it to the top five.”

Russia’s Diana Davis and Gleb Smolkin finished sixth (59.89). The team who took silver at both their JGPs earned a level 4 on the twizzles and curve lift, while the patterns were a level 2. The diagonal steps received a level 1.

“We and our coaches didn’t quite understand why we’ve got such points,” said Smolkin. “For example, we’ve got only level one for our step sequence. It seemed to us that everything was good. We will watch our performance later and analyze what happened and what we should correct. We are really happy to be here, to be part of this outstanding figure skating event, but of course we want to be better and to show better results.”

His partner Davis was asked about her mother, Eteri Tutberidze.

“She is like a usual mom,” said Davis. “She can be strict, but she always supports me when I need it. I am really proud of her and always cheer for her skaters. During competitions, we don’t communicate much, only before practice or performance so she can do my make-up for my skin to look better (laughing).”