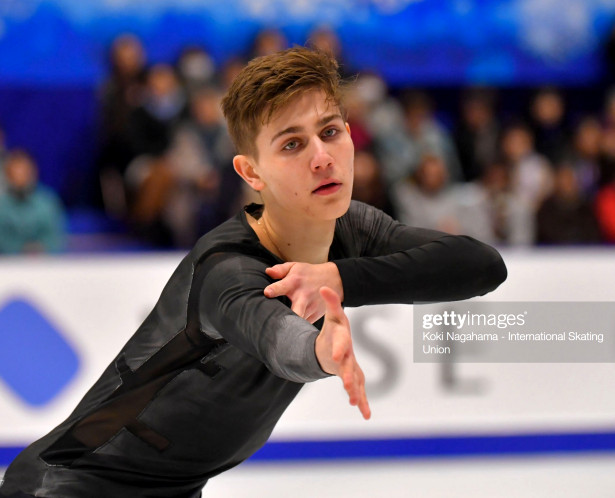 Roman Sadovsky performs to “Schindler’s List” and “Prelude in C-sharp minor” for his Free Skate.

In a spectacular shake up, Roman Sadovsky played the ultimate dark horse by winning gold and upsetting the presumed championship battle between Nam Nguyen and Keegan Messing. The 2019 NHK Trophy bronze medalist landed two quadruple Salchows, one in sequence with a triple Salchow, as well as three other clean triples during his sublime interpretation of Schindler’s List and “Bells of Moscow.” He earned a score of 175.55 for a total competition score of 260.57.

“I definitely wanted it really badly,” he said of the title and the sole trip to the World Championships. “That was definitely in the back of my head as one of my goals. After the skates in my short and long, I wasn’t sure if it would be enough. That’s why I probably had a lack of a reaction at the end, because I was just sort of clueless if it was enough and I guess I am happy that it was.”

“When you are skating, it’s one kind of stress level, but you are sort of in control of what you are doing, but once you are sitting down, you have no control, you’re just sort of watching,” Sadovsky said of the long wait for the rest of the flight to compete to determine if he won the event. “It’s not a good feeling. It’s sort of bitter sweet because you want to place well, but at the same time you still want your friends to skate well. For all of us, we were kind of struggling and I think we all did a pretty good job fighting towards the end.”

“This whole week of training was pretty crazy in the back of my head,” said the 20-year-old of his pacing in Mississauga. “It’s just that mental game all week and I sort of pulled it off, but still a little disappointed that it wasn’t the skate that I wanted.”

Nguyen performed a captivating Beatles routine, but had two falls on his big ticket elements: the quadruple Salchow—both in combination and as an individual jump. The errors proved fatal in Nguyen’s title defense campaign despite four clean triples, including two triple Axels and two level four spins. The judges scored Nguyen’s long program with a 155.47 for a final total score of 243.51.

“I was just focused on doing my job,” Nguyen said of his efforts to ignore what was on the line. “Unfortunately, I was not able to do that. I can’t put the blame on the pressure of going to Worlds, because that really wasn’t the reality. I mean, yes, in general throughout the week, it has been on my mind, but in particular, tonight? Not really. I was in a good zone mentally and physically, but after that first mistake, it started to unravel.”

“Obviously, the hype was between the two of us and Roman put his head down and did his work and he, as I said, completely deserves it,” he said of his anticipated head-to-head match-up with Messing. “He did a great job tonight and yesterday also. He’s such a beautiful skater to watch and I think he will do Canada proud if he gets that spot for Worlds.”

Messing emoted in his free skate to “November Rain” by Guns N’ Roses, but took hard falls on his quadruple toe attempts and doubled out on a planned triple loop. The 2018 Olympian earned 149.18 in the free skate and 241.79 overall.

“The skate, every step was a fight,” Keegan said. “I felt the nerves a lot today. I really thought that one spot for the world team was a big shadow this whole week. I got through the short with it, but the long was another story.”

“Practice this morning was a little hard,” he added, “but I skated through and just kept pushing. Everything today was just a fight. I knew it was going to be hard out there and I really just tried to leave every mistake behind me and keep pushing for the next element.”

“I really felt, besides the elements, I skated very well, the stroking part,” he said. “I made a lot of mistakes tonight, but the way I fought, especially with the two big falls, I got right back up. I went right back into choreography and I really think that I left everything out there.”

Joseph Phan finished in fourth place with a total competition score of 229.19, while Nicolas Nadeau moved up one spot to fifth overall (219.10).