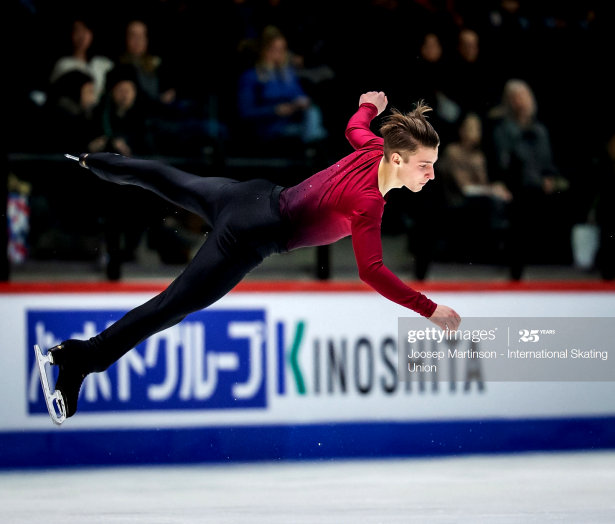 When USA’s Andrew Torgashev closed out the season with an eighth-place finish at the 2020 ISU World Junior Figure Skating Championships in March – his best result in three appearances in the event – the American felt ready to move on to the senior level.

“I think I’ve grown a lot over the years, from 2015 to 2020 in Tallinn,” said the 18-year-old. “I definitely learned a lot about myself as an athlete, as a person, and I made a lot of steps in the right direction throughout the years. I’ve learned to not worry so much and to enjoy the moment more.”

Torgashev, who turns 19 later this month, was looking forward to having a break and then getting back to work to prepare for the next season. However, as it is the case for athletes worldwide, his training has been put on hold for the time being due to the COVID-19 pandemic. While the break has been longer than planned, the skater does not want to waste time.

“I have been dedicating a lot of my time to school and to getting my assignments done,” he shared. “I have been hiking, running, biking, and really doing anything that will challenge my body and keep me active. I’m very lucky to have the beautiful mountains right near me.”

The 2015 U.S. Junior Champion, who lives and trains in Colorado Springs is trying to stay focused during this difficult time. He feels that the best the best tactic throughout this situation is to just enjoy the present and try not to worry about the future too much. However, he’s rearing to get back on the ice.

The skater, who came in fifth at the 2020 U.S. National Championships, was looking forward to enjoying the off-season and taking the time he had to improve on everything.

While Torgashev is not certain about his music choices yet, he has some ideas. He would really like to use Latin, Tango, Flamenco, or something similar along those lines. He is very involved in the process of selecting the music and mounting a program.

“I love movement and I think music really works well with me,” he said. “When I listen to music, I always want to dance. I really enjoy doing my own choreography and then of course, I’ll consult with Scott Brown, who is one of my choreographers along with Sam Chouinard. He did amazing things with my short program. I really love just moving to the music and getting a feel for what the message is of that program.”

“When I hear a piece of music that I feel like I can skate to and I see myself skating to it, then that’s usually the choice that I’ll got with,” he added. “For example, this year’s short program, the first time I heard it I was like, ‘that’s the one.'”

The skater is referring to “Bloodstream” by Tokio Myers, which was his favorite of the two programs. The free skate was set to the dramatic “E Lucevan le Stelle” from Puccini’s Tosca.

“I think I like the short program more because it’s just something it’s different,” said Torgashev. “I don’t hear many people using this music. The whole message is, the story behind it is doing what people want me to do, but it feels uncomfortable and then I start transitioning out of what everyone wants me to do into what I am. So, it was something I worked very well with his season and I’m excited to find another piece of music that really speaks to me like that.”

On the other hand, Tosca and “Roxanne” from Moulin Rouge, which the skater used for the 2018-19 season, are pieces that are quite common in the sport.

“In skating there is a very limited selection of music that’s good to skate to,” Torgashev explained. “I think if someone has skated to it, then they showed you that it’s skating music. Or judges accept it. When many people skate to a piece of music, I look at their program, especially very big names, and see what they have done with it. And then I think to myself, ‘can I do it better or can I do it differently?’ If I can answer both of those questions with a yes, then I don’t mind using the same music. But I can’t do it better than Tessa and Scott,” he added, laughing. Canada’s Tessa Virtue and Scott Moir had skated to “Tango de Roxanne” when they won their third Olympic gold medal in 2018.

Torgashev hails from a skating family. His mother, Ilona Melnichenko, is the 1987 World Junior Ice Dance Champion, while his father, Artem Torgashev, won the silver medal in Pairs in this event. They represented the Soviet Union and later moved to the U.S. to start a coaching career. They also coached their son up until two years ago before he moved to Colorado Springs to train with Christy Krall.

“It’s great! Christy and I work very well together as a team,” he said. “We’re always developing, we’re finding ways in which I can grow the most, in which I can succeed the most in training. But there’s also lots of motivation in Colorado Springs, lots of skaters coming up and working, and we’re all competing against each other.”

Torgashev still works on a daily basis with his mother, who teaches skating skills, but Krall is his main coach. Torgashev’s younger sister, Diana, skated as well, but just for fun.

The move to Colorado was a family decision, and Torgashev is thriving. While he felt he had accomplished everything he could with his parents as coaches, he felt like a “very big fish in a small pond.”

“In Colorado, I’m one of many that are high level,” he acknowledged, “so I think the environment really plays a lot into it. Also, Christy has a lot of experience with high level athletes and being able to prepare them and having them skate the best that they can. My parents were skaters on that level as well, but they don’t have that experience as coaches.”

“I think all of us knew it was coming at some point,” he said of the change. “Of course, it was upsetting at first, but then if you look at the bigger picture, it’s very understandable and it’s nothing personal. I love my parents no matter what, but it’s the best decision for my career.”

The skater feels it is an advantage that his parents have been high-level athletes themselves. “They understand what you’re going through and the position you’re in. When you have tough days, when you have really good days, they’re always there,” he noted.

Torgashev’s talent was obvious early. He won his first national medal, a bronze, at the 2011 U.S. Juvenile Championships when he was just nine years old. Two years later, he claimed the Intermediate title and then, in 2015, the National Junior title which earned him his first trip to Junior Worlds. Although injuries have handicapped the skater in the past, things have improved since.

“This was actually my first season that I was injury-free, since 2015,” said the skater. “I had a lot of injuries, some more minor than others, but all of the injuries that I’ve had have stopped me from training to my full capacity one way or another and this year was the first year that I didn’t have to worry about that. The way I trained this year is not comparable to any other year, because I was able to push my body. I took the time to recover properly and I made sure that I wasn’t putting myself in a position to where I could get injured. When I was pushing myself, I was doing it very smartly.”

Torgashev has figured out a way for himself to avoid injuries and describes it as “layering a cake.” Before, he said that he had been “immature” which led to injuries.

“I didn’t understand my body like I do now,” he explained. “Now I understand what my body needs and what’s best for my body. I think communication with your coaching team is very key. If you’re not feeling great one day, if your muscles are sore, if you just don’t feel like you can push properly, then it’s probably better not to push and be smart. Maybe that will be your light day. And then the next day, when you’re feeling better, you can push again. It’s just listening to your body and communication.”

“You can’t put seven layers on top right away, you have to put down the first layer and wait for it to settle,” he continued, regarding his analogy of layering a cake. “Then the second and you have to keep building and make sure that you’re solid with what you have built before you start building more,” he explained. “In skating, that’s always warming up, that’s always recovering after training, but you can’t go from like off-season training right into in-season training and start pushing yourself. You can’t go from zero to 100. It’s zero to 25, to 50, 75 and then by the end of the season you’ll be a 100.”

Torgashev, who describes himself as “stubborn, persistent and joyful,” believes he has found his destiny and has no regrets about having become a skater. He also does not feel extra pressure because his parents had success in the sport.

While he is studying for a business degree and hopes to work in the real estate industry in the future, the athlete would like to stay involved in the sport after he retires from competing.

“No matter what I do, I definitely want to be a choreographer part-time and really share my creativeness with the skaters that would love to see it,” Torgashev summed up.