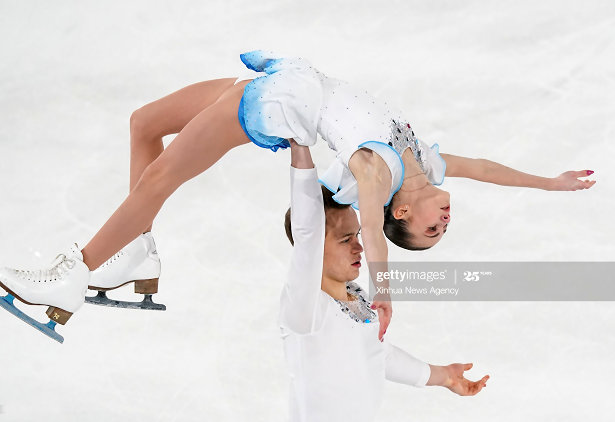 Russian pair skaters Apollinariia Panfilova, 17, and Dmitry Rylov, 18, came off a golden year this season, winning each competition they entered at the junior level, including the Youth Olympic Games and the 2020 ISU World Junior Figure Skating Championships. They only finished off the podium at the highly competitive senior nationals where they placed sixth but won the national junior title. The team from Perm excels in lifts and throws as well as in other pair elements, however, were only lacking a solo triple jump. Now, they are determined to add that element to their repertoire as they gear up for the senior level.

Like everyone else, the World Junior Champions have been forced to train off the ice since their rink closed due to the COVID-19 pandemic a few weeks after Junior Worlds.

“The conditions of the pandemic affect our training plan,” coach Pavel Sliusarenko said. “We are practicing online every day in two sessions. We do choreography the same way. We have the opportunity to work on pair elements as the kids are in Perm.”

“First of all, as probably everyone else, we are trying to protect our close ones from an infection,” Rylov pointed out. “I personally understand that things like that happened before on our planet and we just need to hold out and keep each other safe. We are training separately and together. Sometimes it works out that we can visit each other and train together.”

Panfilova agreed that this is not easy. “But what can we do? We are missing the ice a lot and we hope to get back as soon as possible,” she said.

Between their two daily online sessions, Rylov tries to rest and study for school as he has exams (online) coming up.

According to their coach, the skaters are coping well, knowing that sooner or later the self-isolation regimen will end.

“They assess the situation the right way,” said Sliusarenko. “We are ready to start our regular training and we’re just waiting for an official permission. The kids realize that they have to prepare seriously for the upcoming season. There is no lack of desire on their side to train.”

At press time, the rink was still closed, but negotiations continue and Sliusarenko preferred to stay in Perm rather than joining the national team camp in Novogorsk near Moscow.

After competing for three years at the junior level, the team has decided to move up to the senior ranks.

“We need to move on,” said Panfilova. “It doesn’t make sense to stay in juniors. We would lose time.”

“It would be stupid (to remain junior),” her partner agreed. “We had that year, we won everything. Our goal, as usual, is to skate clean at our maximum and to make ourselves, the coaches, judges and our parents happy. We know what everyone is expecting from us and we’ll try to meet the expectation.”

“Our main task is to continue to perform all elements consistently and with quality and to add triple jumps to the program,” said Sliusarenko of the team’s first year as seniors. “We are trying to surprise all skating fans with something new and unusual and we’re focused on doing some serious work. The pair elements always have been their strength. The throws and the twist are their crown.”

Panfilova, who started to skate pairs when she was nine years old, credits her long-time experience and especially her first coaches, Valeri Tiukov and his wife Valentina, for their expertise in the pair elements. Tiukov was also the coach of Sliusarenko, who wants to continue the legacy of the now retired Tiukov. Valentina Tiukova still continues working with the team.

“As for the throws, I just always loved them,” said Panfilova, adding with a laugh that her partner throws her well. “When I got into pairs, I had a partner who always threw me differently. I had no choice. I either had to fall or stand up somehow. I chose the second option and this helped me and helps until now to feel the throw.”

The team wants to change both programs and start mounting them as soon as they get back on to the ice. They are still discussing ideas for music and have revealed that Nikolai Morozov will again be their choreographer.

“Nikolai Morozov has choreographed for us every season except for our very first one,” said Panfilova. “He is an incredibly hard worker. He is on the ice from the early morning to late at night and he never says that he is tired. He is great!”

The next thing to tackle is a side by side triple jump. The skaters know they need that in order to be competitive at the senior level, and Rylov promised “100%” that they will include one. They have also been working on the Salchow and toe but are not yet certain which one of the two they will use.

Looking back, the skaters and their coach are very pleased with their season.

Rylov still feels a bit surprised by their success. “I still remember myself at the beginning of the season and I had said I wanted to have season like (Anastasia) Mishina and (Aleksandr) Galliamov last year, who also won everything. But I didn’t think that it would work out that way.”

In fact, there were some bumps along the way as preparation for the major events didn’t go smoothly. For instance, Rylov had to fight a psychological low before the ISU Junior Grand Prix of Figure Skating Final.

“I was saying things like ‘we’ll get there and we’ll lose, we’ll be in fifth or sixth place,'” he recalled. “This was terrible. I don’t know what happened to me and I couldn’t put it together. We pulled ourselves together only when we got to Novogorsk, a week before the Final. Then everything worked out.” He went on to credit his partner and his coach for helping him to overcome this situation.

Then, after Junior Nationals, Rylov took ill with a bad throat infection and high temperature. “I couldn’t eat,” he recalled. “I was out for a week and a half. Then I came back and it was probably the hardest preparation. I had lost five kilograms when I was sick and I was weak.”

However, one would not have noticed this setback at Junior Worlds as the team turned in two strong performances to add the gold to their World Junior silver medal from 2019.

The skaters get along well on and off the time, although they are not spending too much time together outside the rink. Rylov feels inspired by his partner who, despite looking so delicate, shows a strong and determined character.

“I said before that I am very lazy,” he admitted. “As far as I know, laziness is not characteristic for her. Sometimes she just grabs me and forces me to work hard. If she hadn’t pushed me, I would not be here. The coaches cannot do that like she does.”

“I know exactly when he just doesn’t want to do something or when something happened,” Panfilova asserted. “I see it the first minute in the gym if something is not right. I feel myself as the leader, but I don’t talk about it. I am a leader in life, in general.”

“If we were fighting over leadership, she would lose,” countered Rylov, “but I don’t need that. I am not worried about that. Some pairs get out on to the ice and start to fight about something and the training is crap right away.”

With that said, Rylov feels they have grown throughout the season. “We went through a lot of psychological and mental clashes between the two of us and this probably brought us closer to each other,” he said.

“The kids are very different, however, they complement each other well,” the coach observed. “They support each other and form a great team. They are trying to make the best out of their skating and both are focused on the result and they are ready to do everything possible to achieve a result.”