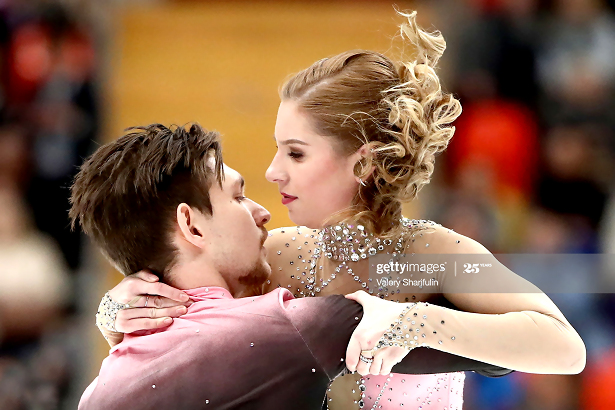 The skating world reacted with shock and sadness after the sudden and unexpected death of Russian-Australian pair skater Ekaterina Alexandrovskaya. The Russian News Agency TASS reported Saturday that the body of the 20-year-old skater was found near a house in the city center of Moscow. According to news reports that quote the authorities, Alexandrovskaya had fallen out of a window. The police suspect that the 2017 World Junior Pairs Champion committed suicide and that a note left behind read “I love” (with love).

“Words cannot describe how I feel right now,” Alexandrovskaya’s former partner Harley Windsor, with whom she won the World Junior title, wrote on his Instagram account. “I am devastated and sick to my core about the sad and sudden passing of Katia. The amount we had achieved during our partnership is something I can never forget and will always hold close to my heart. This news is something you can never prepare for. Rest In Peace Katia.”

The pairs team had announced the end of their career due to health concerns in early 2020. Their last coach, Andrei Hekalo, told Russian media that Alexandrovskaya had suffered an epileptic seizure in January and was advised by the doctors to end her competitive skating career. The coach also said that the skater had talked about wanting to stop skating in the end of 2019, but eventually decided to continue.

“The last time we probably trained on January 10. Then she had the seizure,” Hekalo told the Russian news agency RIA Novosti. “She was taken to hospital for observation. This was before Four Continents. She was in the observation ward for two weeks. Afterwards, I went to the doctor and he told me that this is epilepsy and Katia probably should not practice sports professionally. This (seizure) can happen at any moment.”

The coach said that his former student was perfectly suited for pair skating. “There are specific elements in pair skating, for example lifts and twists – and they were just hers. What others had difficulty to learn, was much easier for her,” Hekalo said.

Olympic Pairs Champion Maxim Trankov, who trained in the same school as Alexandrovskaya, told the news agency TASS that he remembers her as a talented, hard-working athlete. “When we talked to her, nothing indicated the disaster and it was difficult to expect such a final (act).”

“The ISU is shocked by the news of Ekaterina’s passing,” said ISU President Jan Dijkema in a statement on the ISU website. “She was a talented pair skater and the Figure Skating community will miss her. We offer our deepest sympathies to her family, friends and teammates and mourn this tragic loss.”

The Russian-born skater represented Australia, who represented Australia, teamed up in late 2015 with Windsor. The duo took the skating world by storm, won the 2016 ISU Junior Grand Prix in Tallinn, Estonia and qualified for the ISU Junior Grand Prix of Figure Skating Final. Just a little over a year after their first tryout in Moscow, Alexandrovskaya and Windsor made history by striking gold at the 2017 ISU World Junior Figure Skating Championships, becoming the first Australian figure skaters to win an ISU Championship title. They went on to take the ISU Junior Grand Prix Final title in December 2017 and competed at the 2018 Olympic Winter Games.

Injury problems occurred soon after and the team did not compete at the 2019 ISU World and Four Continents Championships. Their last competition was 2019 Skate America in October. In early 2020, Windsor announced on Instagram that he and Alexandrovskaya decided to end their career as a pair due to health concerns. He returned from Moscow to Australia.

Words can not describe how I feel right now, I am devastated and sick to my core about the sad and sudden passing of Katia. The amount we had achieved during our partnership is something I can never forget and will always hold close to my heart. This news is something you can never prepare for. Rest In Peace Katia.