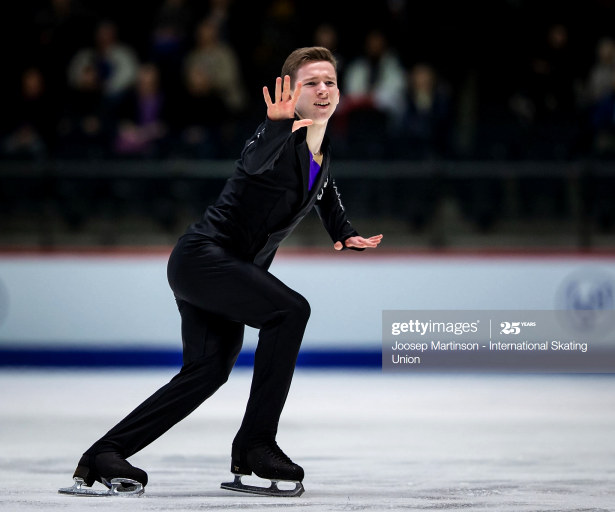 Last March, Russia’s Andrei Mozalev realized one of his dreams and stepped on top of the podium at the 2020 ISU World Junior Figure Skating Championships in Tallinn, Estonia. It was the highlight of a great season for the now 17-year-old, who made the podium in all events he entered except for the Russian Championships at the senior level. Now, following the involuntary two-month break from on-ice training, Mozalev is happy to be back on the ice in the training camp in Novogorsk since end of May and to prepare for the next season.

Following Junior Worlds, the skater from St. Petersburg competed once more at a national event in Krasnoyarsk at the end of March. When they returned to St. Petersburg, coach Kirill Davydenko wanted to give his long-time student a few days off. However, the plan quickly changed.

“When I realized that we were about to shut down everything, I pulled him (Mozalev) out onto the ice with the choreographer (Denis Lunin),” Davydenko recalled. “We already had some ideas for the music and we were able to whip up a short program.”

Neither coach nor student are ready to reveal the music choice yet. “We just managed to do the program before the lock-down,” Mozalev said. “It is different from the old one, not similar at all. It was a lot of fun to work on the program. It was at another level and therefore it was interesting.” In the past season, Mozalev had skated to music from the Russian rock opera Yunona and Avos.

Meanwhile at the training camp in Novogorsk, Lunin also built the new free skate. Again, the music that they had selected during the lockdown is still under wraps as is the planned jump content. “I want to show the programs in competition and not talk about them before, therefore I keep it all secret.” Mozalev noted.

The World Junior Champion kept himself busy during the so-called “self-isolation time” in April and May. He spent time at the summer house of his family outside St. Petersburg where he was able to do off-ice training.

“I am running, jumping and I’m training online with Kirill Anatolievitch (Davydenko),” he offered. “We also do choreography, working online with Igor Kosheev (choreographer). So, the training continues, everything is there. Even though it was still quite chilly outside, he felt it was better to be at the summer house than in the city where life was very restricted. People were only allowed to leave the house for grocery shopping or to see a doctor.

Mozalev had no problem staying motivated during this time. “I kept in shape, because we might go out on to the ice tomorrow. I had to be ready and therefore I tried every day to stay fit,” he pointed out. “It was good to work on the physical shape, but obviously I missed the ice.”

Coach Davydenko was happy with how his student dealt with the situation. “The results of this season are a good motivation in the first place. Therefore, I didn’t have to give any extra motivation. I think when an athlete has reached a certain level, you don’t need to push him,” he said. “We understand each other very well. We know the goal we are striving towards to and we understand the current situation. We discussed everything and I explained what ways we have to solve the problems at hand. That way we can take out the maximum of the given situation.”

Davydenko describes his top student as a hard worker. “In the past, when his vacation started, Andrei said himself that after a few days he missed the physical exercise. So, this long period without (normal) training was a kind of cold turkey for them (the skaters) and they really longed for extra exercise.”

Mozalev agreed. “I don’t think that I have changed during this time, I am still the same that I was before. However, before, training on ice was just something normal for me. I just went there and it was like it always has been. Now I know that I will use every practice session to the fullest, even more than I did before.”

The Youth Olympic Games silver medalist used the time of lockdown to study for school. He finished the ninth grade this spring, but the general state exam at the end of that grade was canceled due to the pandemic. The students just received their marks based on the average of the year, as Mozalev said. He was studying online. “The teachers sent us homework and I sent them back electronically. However, I usually have to study by myself, therefore for me nothing changed basically.”

Mozalev, who enjoys reading in his spare time, especially books by the author Stephen King, describes himself as a “modest and quiet person.” Davydenko adds that his student is not very talkative, but very thoughtful and that he is a fighter.

The skater showed his “fighter” quality at the Russian Junior Nationals in which he entered as a favorite, but a faulty short program left him in 13th place. He needed to make the top three to make the team for Junior Worlds. Mozalev rallied in the free skating, won the segment, and pulled up to third place.

“I didn’t have to pull him out of some kind of (depressive) state (after the short program),” said his coach. “We talked about it and moved on. Andrei is a real fighter, that impresses me a lot.”

Davydenko feels that his student has changed a lot over the past season. He feels that young people in general are developing very fast, and that Mozalev has grown up a lot during this year. The coach recalled how Mozalev won the first Junior Grand Prix of his career in the 2018-19 season and collected valuable experience.

“In the off-season, his approach to the preparation had changed,” analyzed Davydenko. “It was not a change in my coaching methods, but in his own approach. The preparation in the off-season is grueling, serious work. The Junior test skates (in Russia) are in the beginning of August and you have to work very hard to have a good fundament for the whole season. This is what he did and as a result, the season went well.”

“From a year ago to now, he has become a totally different person,” the coach added. “We are talking a lot and discussing a lot. I am sending him some interesting articles and video clips. Then I am discussing them with my athletes. I am listening to what they are saying and I see how they are changing for the better.”

Mozalev himself realized that he had evolved as a person. “I had competed a lot, I gained experience, I opened up. As I did many events, I think I have grown mentally. I realized that there is nothing difficult about competitions, it is the same as in practice.”

The results of the season, particularly the World Junior title, are a strong motivation for him. “This victory (at Junior Worlds) means that I’m moving into the right direction, that I just have to continue to move forward. Obviously, you can see that as a little springboard, a step towards the senior level as when you are in the top three at Junior Worlds you have a better chance to get senior level Grand Prix,” the teenager observed.

The 2019-20 Junior Grand Prix Final silver medalist feels ready to take the next step in his career. He wants to move forward and up into the senior level. In part, because he was in the Final together with the seniors and it was a different setting.

“I like it more,” he said. “There are more serious competitors and there are many more spectators, of course, and I like that.” Even though Mozalev is a bit shy, he does enjoy performing in front of an audience. “When I am going out onto the ice, the audience is helping me, they give me power, energy, and good vibes.”

For Mozalev, who followed his sister Elizaveta into the sport, skating is his life. When asked what he wants to do after his career, there was no hesitation — he wants to coach.

“I can’t be without figure skating and I always want to be on the ice, in this sphere,” the 17-year-old explained. “I just love it and I just like everything about it and there isn’t anything I can single out. I like the jumps best, of course, but I also like to skate and the spins.”