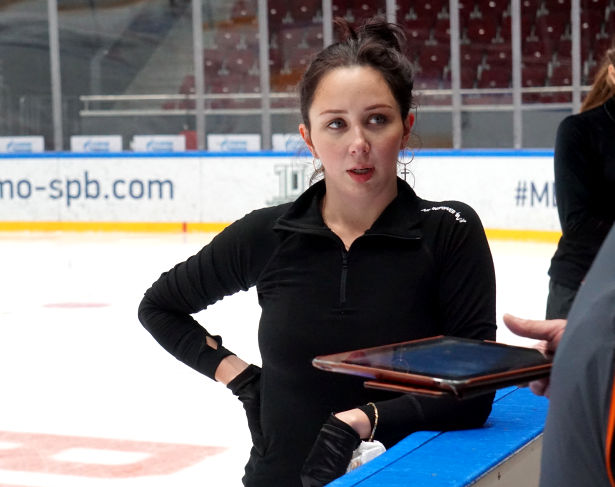 Elizaveta Tuktamysheva talks to a technical specialist during a practice session in St. Petersburg.

Elizaveta (Lisa) Tuktamysheva is one of the most popular Russian figure skaters and called “The Empress” for a reason. The 2015 World and European Champion shows longevity in a sport where teenagers dominate and always has something new in store. For this season, the skater from St. Petersburg has created a Japanese style free skate with well-known ballet choreographer Juri Smekalov online. She has brought back the Biellmann spin, is working on a new quad, and is about to release her own fashion brand “Empress Wear.”

Tuktamysheva put out two solid performances that included a triple Axel at the St. Petersburg test skates that took place end of August. The skater claimed that she wasn’t as nervous as last year due to having a “step-by-step” approach to this season, not being in a rush, and going in with a calm mentality.

“I rate them very positive, because until you show the programs as a whole to the spectators and judges, you don’t understand what is missing or what corresponds to the music and what doesn’t,” said the 23-year-old of the test skates. “The programs left a better impression than I expected. The free skate needs some polish, but that is logical as we had worked more on the short program. Overall, I am happy with the beginning of the season and will try to continue in that spirit.”

Tuktamysheva feels that it took her some time to get back on track after the long break due to the COVID-19 pandemic. Like many other skaters, there we many months with no on-ice training.

“This was the longest break in my career,” said the athlete. “I got into shape step by step, but at one point, the process stopped and my body needed to remember what to do. Most importantly, I did not panic, although I could have started to think about why it was not working out. I tried to control my emotional state, and I understood that this is fine.”

Tuktamysheva’s new short program is set to the “Adagio” from Aram Khachaturian’s Spartacus – a lyrical piece and quite different from what she has done in the past few years. Italian ice dancers Anna Cappellini and Luca Lanotte choreographed the program. It was Tuktamysheva’s idea to work with the 2014 World Champions after performing with them in a show in Japan last year and in Italy following the Russian National Championships.

“When they sent me Khachaturian’s ‘Adagio,’ I remembered it right away,” she said. “I’ve always liked this piece and I didn’t hear it much on the ice last season, so I had forgotten about it. Anna and Luca approached the choreography in an ideal way and I was stoked from working with them!”

Tuktamysheva had skated to lyrical music as a child, recalling “Solveig’s Song” from Edvard Grieg’s Peer Gynt as an example. Although this was a piece she used for her free skate 10 years ago, she didn’t find any issues slipping back into that style.

“I feel it really well,” she explained. “For me, the most important thing is to feel the music with my soul and when this happens, it is very comfortable for me to skate to it.”

“At the test skates, I was happy to see that Lisa did all the elements including the triple Axel,” coach Alexei Mishin noted. “She shows a new and interesting character (in the short program) and I am grateful to Anna Cappellini and Luca Lanotte for that. They suggested two pieces of music – from the ballet Spartacus and a piece by Madonna. I preferred Spartacus right away.”

The free skate is set to the Japanese style piece “Chronicles of a Mischievous Bird” by Russian composer Bhima Yunusov, who happens to be a friend of choreographer Smekalov. Tuktamysheva confessed that it was a bit more difficult to get into this program.

“At first, I didn’t understand why and I thought it was because of the long break in training,” the 2015 European Champion shared. “Then I realized that there is no slow part in the music, the program is building throughout. Therefore, it is not yet physically easy to skate through as I would like to, but this is a challenge for me. When you want to take such interesting music and do the program with such a high-class choreographer, you need to know that it won’t be easy.”

Tuktamysheva is now working on polishing the program to make a true performance out of it. Following their online choreography, Smekalov came to the ice rink to resume working on the program and will return as time permits to continue. He was very happy with how the program has been transferred to the ice.

Recently, the skater has started working on the quad Salchow again. She revealed that it was easier for her as she has not yet landed a clean one in practice and therefore feels less pressure doing it.

“I have the feeling that I am learning it, but have not completely learned it yet, and mentally, it was easier for me to continue studying it,” Tuktamysheva elaborated.

“There were good attempts in practice. Now we are putting these attempts together. That’s like putting snowflakes together to form a snowball to throw at the competitors,” coach Alexei Mishin said with a laugh.

The plan is also to return to the quad toe, a jump she landed successfully in practice last season.

“I will work on it, but we decided for now to focus on getting the two triple Axels and all the other elements in the program consistent,” Tuktamysheva shared. “I will recover the quads when I am in a good shape. For me, it is important to know that my body is ready. When I know that my body is not yet capable of doing an element, it is very hard for me.”

Tuktamysheva also brought back the Biellmann position in her spin that she had abandoned in 2015 due to back problems.

“I even learned a new position,” the skater said with a laugh, adding that the extended off-ice training and stretching exercises helped her to gain more flexibility. She needs the Biellmann position in order to be able to achieve a level four on all spins and feels it makes the spin more interesting.

Mishin pointed out that he enjoys working with his long-time student.

“You have to thank Lisa,” the legendary coach said. “She is now a significant person in the world of figure skating. She is an example that you can skate well when you are not a child anymore.”

While the situation with international competitions is still unclear, the Figure Skating Federation of Russia is preparing to hold their national Cup of Russia series. At present, Tuktamysheva has accepted the situation as it is, but it was not always like that.

“In the middle of the summer, when we started to skate, it was not easy, because for me it is important to know what goal I am going towards to,” she admitted. “Then I started to accept calmly what happened. Now, knowing about the imminent future calms me down and I am fine with the situation. What will be after Russian Nationals? I’ll think about it then.”

“Now, I am setting goals until December and then we’ll see how life will develop,” added the skater, who has been assigned to the national Cup of Russia events in Sochi at the end of October and in Moscow in early December. “Under the current circumstances, it is impossible to plan ahead. Now I’m thinking about the test skates (for the national team), the two Cup of Russia events. I am preparing for that.”

This past July, the athlete graduated with a bachelor’s degree from the St. Petersburg Lesgaft University for Physical Education, Sport and Health. She plans to take a year off from studies and then wants to inscribe in a master’s program in psychology. At the moment, however, Tuktamysheva has found some new activities to keep herself busy.

“In September I want to release a collection of sportswear, my own brand, for athletes and figure skating fans,” the 2013 Russian Champion revealed. “Soccer and ice hockey clubs have stores where fans can buy accessories with the name and number of their favorite player. We don’t have that in figure skating and I decided that it would be great to have some clothing that you can wear when going to a figure skating event and show everyone that you are a skating fan. The first collection will be associated with myself, and then we’ll see.”

Tuktamysheva hired a professional designer to help realize her ideas. Her line “Empress Wear” will be available online in the near future.

“I am just starting this,” she said. “I’ve been doing it with my friend and it is interesting for us, but we are not professionals. We’re just testing it out and I don’t know yet if I’ll do it in the future. I’m just trying myself in different spheres of life to understand what I like.”