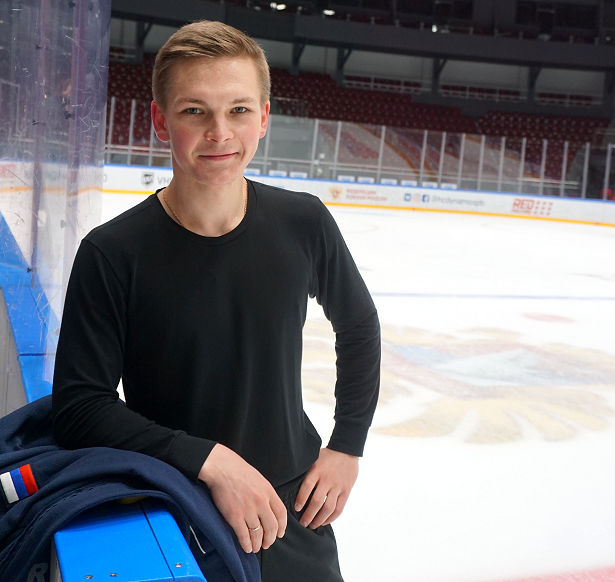 Russia’s Mikhail Kolyada takes a break for a pose in St. Petersburg.

Last season, Russia’s Mikhail Kolyada was absent from the figure skating scene as he had reoccurring sinusitis which eventually required surgery last fall. The 2018 World bronze medalist returned to the ice in January and was just beginning to get into shape when the COVID-19 pandemic hit. His performance at Elizaveta Tuktamysheva’s ice show in March was his first and only public appearance since the test skates last season.

Like all other skaters across the globe, Kolyada was off the ice for weeks and tried to stay in shape with off-ice training. Shortly after returning to the ice in June at the training camp in Novogorsk, Kolyada changed coaches, leaving Valentina Chebotareva, who had coached him since childhood, for Alexei Mishin.

“It was simple,” said the two-time Russian champion. “I just went for it and decided to go to him (Mishin). I really want to thank Valentina Chebotareva for going that path with me for almost 20 years and for achieving good results. I also want to thank (choreographer) Olga Zotova and (off-ice coach) Mikhail Semenenko. All these people have taught me a lot and I have only warm feelings towards them.”

The coaching change seemed abrupt, but in fact, it was the result of a process. During quarantine, the 25-year-old took time to weigh his options and think about his future. From his standpoint, “everything that affects us directly or indirectly, is a certain experience.”

“The situation today helps to understand yourself,” explained Kolyada in May. “There is time to answer questions that in the ‘normal’ life you don’t get your hands on. You can think in a calm environment about how your future work will be constructed.”

Now, Kolyada has been training under Mishin since June and feels very comfortable in this environment. In fact, he finds it not only interesting, but a challenge as well.

“When you have been skating under one coach for 20 years like I did with Valentina Mikhailovna (Chebotareva), you know her style inside and out,” the European bronze medalist pointed out. “Now everything is for me completely new — a new group, new ice, and new environment. I take this change as a change of my workplace. I didn’t leave my job, but I changed the place of work. It is interesting for me that Alexei Nikolaevitch (Mishin) looks at me with a fresh eye, is noticing sometimes something what I hadn’t even thought about why I am doing it like that.”

The skater doesn’t feel that Mishin is too strict with him. “I like to think that I am dutiful. You give me a task and I go to fulfill it, I don’t need a strict control,” he noted. 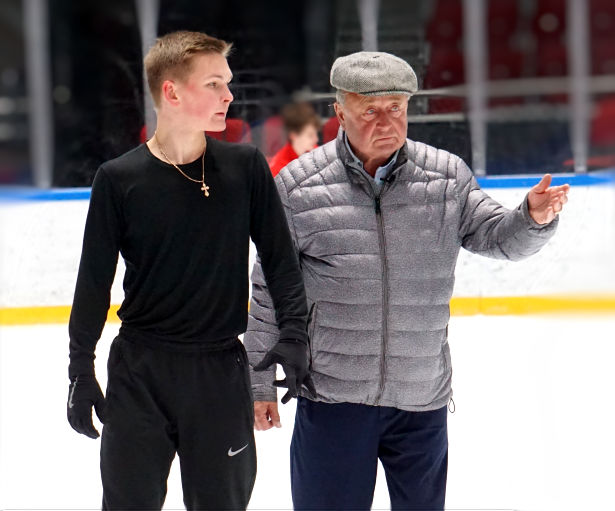 Mikhail Kolyada and his new coach Alexei Mishin at a practice session in St. Petersburg.

Coach Mishin said he took some time to think before taking on his newest student. He asked the skater when he last performed a quad in competition, which was about a year and half ago at 2019 Worlds.

“Misha (Mikhail) has the task to overcome his vices,” shared the coaching legend. “I as a coach, have a difficult task, but the situation is not new for me. I went through that with Zhenia (Evgeni Plushenko) when he came back, twice (in 2010 and in 2014), and with Carolina Kostner. I also had that experience with Artur Gachinski, but it was unsuccessful. With Lisa (Tuktamysheva), there was a time when she placed like 10th and basically was unable to skate.”

“My experience tells me not to rush,” Mishin added. “The opinion exists that all his (Kolyada’s) problems come from psychological instability, however, I want to say that all psychological conditions have a material base. Now I figured it out and I see my first task in making some corrections to his jumping technique.”

Kolyada had no problems adjusting to his new training group. While he was the only high-level skater under his previous coach, he now shares the ice with others that are able to land quads, such as juniors Evgeni Semenenko and Gleb Lutfullin, as well as Andrei Lazukin (once he is healthy again). Even Tuktamysheva has a triple Axel and is working on quads.

“I got right into it (the practice group) and I feel great in it,” Kolyada offered. “It is very good to have people next to you that you can strive after. It makes training even easier. The saying ‘one man in the field is no warrior’ doesn’t exist for nothing. Without competition, it was sometimes hard to motivate myself for practice, not physically, but mentally. Obviously, each practice consists of jumps, spins, run throughs. It basically is not changing, but the attitude is changing, the mood is different, and you get power and enthusiasm.”

In this particular group environment, Kolyada is having more fun as gets to “compete”‘ with the other guys in practice, reeling off some triples and quads. He feels that at the end of the session, his work was “nice and enjoyable.”

The 2018 Olympian is also getting used to Mishin’s training methods and special exercises which are new to him.

“He (Mishin) told me that this method will work when it has become mine—when I am doing all that automatically, without thinking, always and everywhere,” Kolyada noted. “It is a kind of motivation. I am now jumping and running like a young kid. Everyone in the group is young and why should I be any worse?”

Kolyada has two new programs for this season. At first, the team was thinking of keeping last year’s jazzy short program, but then decided to change both. The short is set to Jennifer Lopez’s song “Let’s Get Loud” interpreted by “The Baseballs” and the skater himself suggested it.

“I wanted to use that in one of the past seasons, but the coaches then said ‘no,'” recalled the skater. “When we were looking for music this time, my beloved wife reminded me of it.”

He took the music to the rink, and while Mishin first had to think about it, choreographer Tatiana Prokofieva agreed right away and said that this was a perfect choice.

The search for the music of the long program was much more difficult. Coaches and student were listening to a lot of different pieces. Eventually Mishin suggested the music from the soundtrack of the movie The White Crow which is based on a famous Russian ballet dancer, Rudolf Nureyev, who defected from the Soviet Union to France in 1961.

“My first impression was surprise and I said, ‘I don’t know,'” Kolyada recalled. “Then when working with (choreographer) Ilia Averbukh, we tapped into some things and I am starting to feel this music. I think the program will work out well. It is completely different from what I have skated to before and it can have some wow effect. When people who have been following me for a long time, see it, they will say ‘this is a different Misha.'”

The skater said that everyone can have his own imagination of the character he is portraying in the long program, but that he has his own inner vision of what he is interpreting.

“Right now, we have a skeleton of a program that we need to build up,” Kolyada shared. “Basically, in each practice we are discussing vividly and I am taking part myself, which is nothing new for me.”

Coach Mishin explained his choice of The White Crow for his student: “The image of a cartoon boy was attached to Misha Kolyada and you have to say that this cartoon boy was very good—clever, quick, and charming. I suggested the music to Averbukh and it seemed unusual to him at first, but this music shows Misha in a completely different character, in a genre that he never had used before.”

The program looked very promising at the recent St. Petersburg test skates. Kolyada, who doesn’t like to talk about the goals he sets for himself ahead of time in his comeback season, has been assigned to the national Cup of Russia events in Sochi at the end of October and in Moscow in early December.