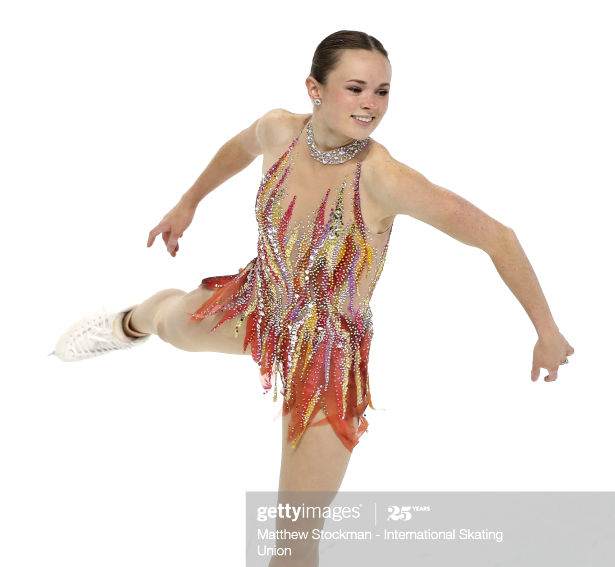 Following a decision of the ISU Council due to the ongoing Covid-19 pandemic and travel restrictions, the Grand Prix events are primarily domestically-run events with domestic skaters and skaters who train in the host country or respective geographical region competing. Additionally, in strict accordance with the Nevada Gaming Control Board guidelines, there are no spectators in attendance at the Orleans Arena in Las Vegas.

Bell was solid in her routine to “Glitter in the Air” by Pink, landing a double Axel, triple flip-triple toe, and triple Lutz. The 24-year-old, who won bronze at both Grand Prix events last season, also earned a level 4 on her spins and footwork. She scored 76.48—over five points from her previous best at the 2019 ISU World Figure Skating Championships.

“Obviously this is an interesting situation that we are all in, but we are still fortunate for all the hard work that everyone has put in to keep everyone safe,” said the 2020 U.S. National silver medalist in her opening statement during the press conference. “Even if there wasn’t a crowd, I really enjoyed performing. It was so fun to be back in a competition atmosphere. I had a really great time today!”

Bell will be skating both programs with the same dress at this event.

“It didn’t feel great in practice today,” she explained of her short program dress. “I didn’t really have a backup, so I decided to wear the long program dress. We are Vegas and have cardboard cut-outs, so anything goes! With age comes more experience and I definitely feel like I’ve been through things in my career that I had to adjust to. Switching a dress out, when you get out there, you don’t think about.”

Tennell’s only mistake was an underrotated triple toe on the back end of a triple Lutz. The 2020 Four Continents bronze medalist otherwise showed a strong double Axel and triple flip in her engaging routine to  “Moderation” by Florence and the Machine. She also received level 4s on the footwork and spins and placed second with 73.29.

Tennell echoed Bell’s sentiments regarding the work that went into making the event happen, adding that she too, had a great time.

“It’s been so long since we’ve been able to get out there and skate our programs for people,” said the 22-year-old. “Even if they are not here in person with us, we appreciate all the support they are giving us from afar.”

“You learn to take things in stride and roll with punches,” Tennell added. “The little things are just that. They are little. In the grand scope of things, like performing without a crowd or switching out a dress, just goes to the back of your mind when you step out on the ice. No matter what you are wearing or who’s in the stands, or where your at, your job remains the same.”

In her Grand Prix debut, Shin earned 69.77 points, besting her previous score from the 2020 Winter Youth Olympic Games, and sits in third. She delivered a triple Lutz-triple toe, double Axel, and triple loop in her light and airy routine to “The Giving” by Michael W. Smith. The steps were graded a level 3, but the teenager received a level 4 on all spins.

“I had a great time performing today at my first senior Grand Prix,” said the 2019 U.S. National Junior silver medalist. “I was really excited to get back out there and start competing again.”

Karen Chen trails Shin by less than half a point after her routine to “Rise” by Katy Perry. The 21-year-old underrotated the triple toe in a triple Lutz combination, but showed a good double Axel and triple loop. All spins were graded a level 4 and she topped her previous personal best score from 2020 ISU Four Continents Championships with 68.13 points.

Chen decided to take a leave of absence from her studies at Cornell due to the pandemic to focus on skating. The skater stated she felt the best she ever has in practice since training in Colorado Springs.

“I feel like I’m a very short-term goal-driven person,” said the skater regarding her goals for the 2022 Olympics. “So staying in the moment and setting short term goals for myself is key to being on the Olympic team again.”

Amber Glenn placed a close fifth with 67.85 points, slightly higher than her previous personal best at 2019 Shiseido Cup of China. The 2019 U.S. International Figure Skating Classic bronze medalist had a turn out after in triple flip in combination with a triple toe, but the double Axel and triple loop were solid. All spins were also graded a level 4 in her routine to “Scars” by Madilyn Bailey.