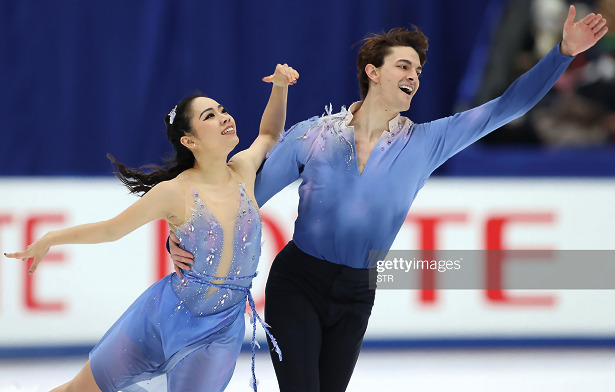 Performing to “Une histoire d’amour,” Komatsubara and Komatsubara produced three nice level 4 lifts, as well as a level 4 combination dance spin. The twizzles were graded a level 3 for her and 4 for him, and the midline steps were a level 3. The only issue was a one-point deduction for a time violation, but the 2020 NHK Trophy champions had plenty to spare after garnering 103.49 for the Free Dance and 175.23 overall.

While happy with the result, Misato Komatsubara felt that she was very unsteady in the turns and felt weak on in her legs. Her partner feels he needs to work more on his posture.

“It wasn’t like that in all turns, but in some and that’s what I want to work on,” she said. “Under the circumstances, it is a miracle that we were able to perform and we are really grateful for that. I hope everyone enjoyed our performance even from afar.”

“It is difficult not to make big mistakes in ice dancing,” she added. “We are happy to have achieved this goal so that we can now aim for a higher level. We did what we wanted to implement as well as we could. When I did the winning pose, I was very exhausted, but also very happy.”

“This year is very stressful, not only for us athletes, but also for the coaches and all other people,” said Takeru Komatsubara. “I am very happy that we could show a good show in front of everyone. It’s been a very long time since we skated last, so I was very nervous. I was very happy to have made it, so I showed the winning pose.”

While it’s unknown whether the World Championships will take place this year, the husband-and-wife team acknowledged that they need to improve on the technical and expression their Rhythm Dance, and that’s their goal for the moment.

Muramoto and Takahashi finished third (84.03) in the Free Dance and second overall with 151.86 points. The 2020 NHK Trophy bronze medalists took a one-point deduction for a fall when Takahashi put stumbled and put a hand down on the ice during the dismount of a stationary lift. He also had a slight bobble during the diagonal steps and twizzles, but the new team fought through to the end in their performance to selections from La Bayadère.

“Actually, I was very calm all the time, even after I made the first mistakes,” said Takahashi. “For that reason, I can’t say what the reason was. I think that the big mistake at the beginning influenced the whole program. I’ll have a look at the recordings later to find out what could have caused it.”

“We still have to work on very many elements,” Muramoto pointed out. “Not only each one individually, but especially as a team. This includes our speed, for example, that we adapt to each other. There are many points that we were able to do during training, but not during the performance. Also, we want to become more confident in the lifts. But overall, we need to work on everything.”

Still, Takahashi feels they have made progress in both the Rhythm and Free Dance.

“We have already been able to match our feelings better than we did at NHK,” he said. “And we will gain our experience to improve our skills through that. We have already made progress, but we still need to work more intensively on all elements. However, we want to improve that step by step.”

Fukase and Cho finished fourth in the Free Dance (83.16), but managed to maintain third overall with a total score of 145.18 after their performance to “My Funny Valentine” and “Feeling Good.” The 2020 NHK Trophy silver medalists showed two level 4 lifts and the twizzles were rated a level 4 for her and 3 for him, but Fukase had a fall during the one-foot steps.

“After I fell, there were small errors all over the program,” said Fukase. “That has been very frustrating for me. I couldn’t catch myself very well, but I think I can learn from this experience for future events.”

“It was a good time overall,” said Cho. “Between NHK Trophy and the national championships, we trained in Japan and that was a completely new experience for us. It’s very different from Canada and we were able to learn a lot from it. I also want to say thank you for the support.”

Kiria Hirayama and Aru Tateno placed fourth overall  (143.40) in their debut. They finished second in the Free Dance which featured level 4 twizzles and lifts, but the program component scores were not as high as the top three teams.

Haruno Yajima and Yoshimitsu Ikeda rounded out the five teams with 118.87 overall.

What are your thoughts on the Free Dance? Discuss here.