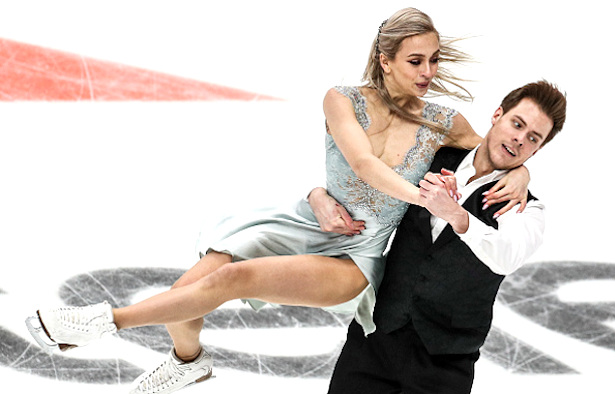 Victoria Sinitsina and Nikita Katsalapov of Russia perform their Rhythm Dance at 2020 Rostelecom Cup in Moscow.

Last season, Russian ice dancers Victoria Sinitsina and Nikita Katsalapov, were in good form, winning their first two gold medals in the 2019-20 ISU Grand Prix of Figure Skating series and then edging out France’s Gabriella Papadakis and Guillaume Cizeron in a major upset for title at the 2020 ISU European Figure Skating Championships. This result immediately brought about conjecture that Sinitsina and Katsalapov could possibly challenge the 2018 Olympic silver medalists at the 2020 World Figure Skating Championships.

However, the pandemic struck and Worlds were cancelled. Fast-forward to the beginning of the 2020-21 season in September, the Russians found themselves struck mid-stride with injuries. They were unable to take part in the Russian senior test skates as Katsalapov was struggling with back problems. The following month, the team had to withdraw in the middle of their free dance at the second event of the national Russian Cup series as Sinitsina was experiencing severe tendon inflammation in her knee.

November marked their competitive return when they defended their title at the 2020 ISU Grand Prix Rostelecom Cup, picking up their third ISU Grand Prix gold medal of their career.

“We are very excited to come back!” 29-year-old Katsalapov said. “We love to perform, no matter all the difficulties that have been bothering us in the first half of this season. I am even not talking about the pandemic as this affects not only the sport, but the whole world.”

Overall, the team was satisfied with their performances, although not everything was perfect. The ice dancers missed their rotational lift at the end in their new free dance to Michael Jackson’s “Smile” and “Come Together.”

“We critically lacked time to prepare for this competition, so we probably performed our programs quite well,” Katsalapov explained, adding that the error on the lift was a result of lack of physical strength. “We were able to train more or less fully for only one and a half weeks and this is absolutely not the normal extent of training to prepare for a competition.”

“We really missed competing and it was very nice to skate our programs,” added Sinitsina, 25. “However, I hope we’ll show better versions of our performances next time.”

The two-time and current Russian Champions admitted that they were a bit nervous although they are experienced competitors and have been skating together for nearly six and a half years.

“I was more nervous before the Rhythm Dance,” admitted Sinitsina. “The main thing is just to get started and this is the hardest part.”

Katsalapov also felt some “inner nervousness,” adding that they did not have enough time to polish their program.

“We are not improvising,” he explained. “Everything that we are doing depends on how many hours you have spent on the ice, how many times you went through your programs, and then the confidence appears. As we did not succeed yet in really breaking in our free dance, it is still not clear to us how to manage our energy throughout the program.”

The 2019 World silver medalist kept their successful Rhythm Dance to “Singin’ in the Rain” as they did not have much time to create a new one due to the restricted training in the spring and Katsalapov’s injury in the summer. At first, Sinitsina was not too happy about that.

“I usually don’t like skating a program for too long,” she shared. “However, just before the Grand Prix in practice, we realized that we are not fed up with our music. We just enjoy going out on to the ice and skating to it every day in practice and in competition.”

The free dance to the Michael Jackson medley is a new direction for the team.

“In fact, many people just got used to Nikita and me skating to more classical music,” Sinitsina shared. “Actually, it is not like that, because we also have taken not classical pieces. This was a bit harder to combine everything, especially with the fast part at the end.”

Her partner did not feel it was difficult. “Vika and I have tried many different characters. We had a Tango and calmer programs such as the ‘Air’ by Bach. This music is compared to our last free dances more modern, more dancy, and everybody knows these music hits. We really love our program with new elements and the bright dancy last part. We only need to be healthy and work on it, because in practice, it gives us unreal emotions.”

The music choice was a collaboration of the ice dancers and coach Alexander Zhulin. He first suggested one version of “Come Together,” then Sinitsina found another one. The problem was to combine it with another piece, and eventually, Sinitsina suggested to use the two songs performed by Michael Jackson.

Sinitsina and Katsalapov did not plan to participate in the fifth stage of the national Russian Cup series but want to prepare for Russian Nationals which will take place later this month, December 24 to 27.

While the team admits to not being “one hundred percent healthy” yet, Katsalapov is doing exercises to strengthen his back and she is careful with her right knee. At least her left knee, which has bothered her in the past, is fine now.

The reigning European Champions feel that it is especially important that competitions are taking place.

Sinitsina agreed. “Indeed, it is very scary and we are just trying to do everything that depends on us. We are taking care of our health. We are wearing masks and gloves and are trying to avoid public places. We try to avoid the risk to get sick, but unfortunately, nobody is safe from that. I hope everything will be fine, for everyone.”

As with many other athletes, Sinitsina and Katsalapov feel that it is sometimes hard to keep the motivation up when there is uncertainty regarding which competitions will take place, if at all.

“But we are training,” said Katsalapov. “Thank God we have the opportunity to train. Thank God that so far there is the chance to compete in Russian events. We are just trying not to lose courage. The most important thing is to stay healthy. When you are not healthy, you can neither compete nor train.”