Victoria Sinitsina & Nikita Katsalapov | Golden Skate
Menu
Log in
Register
Navigation
Install the app
More options
Contact us
Close Menu
You are using an out of date browser. It may not display this or other websites correctly.
You should upgrade or use an alternative browser.

Victoria Alexandrovna Sinitsina (Russian: Виктория Александровна Синицина), born 29 April 1995, and Nikita Gennadyevich Katsalapov (Russian: Никита Геннадьевич Кацалапов), born 10 July 1991, are ice dancers who compete for Russia that teamed up to compete after the 2014 Olympics. Both were Junior World Champions and competed at the 2014 Olympics with their previous partners. Nikita and his former partner, Elena Ilinykh, won a gold medal in the team event, and bronze medal in ice dance. Let's discuss the team's new career together!


Programs​
2021-22
RD: "You Can Leave Your Hat On" (from "Nine 1/2 weeks)" by Joe Cocker and "Brick House" by Commodores
FD: "Piano Concerto #2" by Rachmaninoff, and "Rhapsody on a Theme" by Paganini; choreo by Sergei Petukhov


2014-15
SD - Flamenco: Toitas las Mares by Manolo Caracol, and Paso Doble: The Dance by Michel Legrand
FD - Did You Ever Feel Lonely and The Messiah Will Come Again by Gary Moore 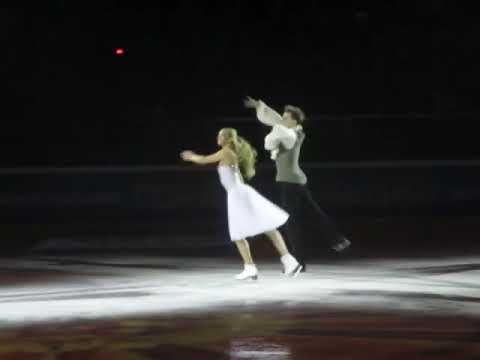 Dec. 2014 - Nikita Katsalapov, "I have nothing to comment"
http://www.goldenskate.com/forum/sh...atsalapov-quot-I-have-nothing-to-comment-quot

Other Videos and Articles

April 2016 -This is a small documentary on Victoria & Nikita:
https://youtu.be/W_scJ1Vjnh0
Hopefully someone can translate it? - This link supplied by Bumdid

I like the tandem, they fulfill the void of their last partners
Elena is rumored to be having issues with work ethic and Ruslan though is passionate has a disavantge with his school boy built.
time will tell how long the partnership will last, but good luck, they have the upper hand against I/Z

a Beautiful Couple, I dare say Sinitsina is more attractive than Ilinykh
hopefully they go away from Morozov soon

This could be an amazing pairing! Hope Nikita learns how to twizzle though...
L

Anyway, Sinitsina is definitely more attractive and technically superior to Ilinykh. I wish Nikita will team up with Sinitsina.

sky_fly20 said:
I like the tandem, they fulfill the void of their last partners
Elena is rumored to be having issues with work ethic
Click to expand...


I admire your enthusiasm and energy, but this is not correct.
First of all, Elena was not rumored to be having issues with work ethic. The couple (not Elena alone) was. There is a big difference, and still as you said, it's just a rumor.

Second, those rumors were made early 2011 and people change.

For all we know their problem may be completely about personal issues.
Therefore, I would suggest, not spreading around a rumor 3 years old, because as you may very well know some reputations are hard to die, like Gracie Gold being a racist for example. :sarcasm:
P

Aaah... The beautiful blonde couple of back stabbers, tho I want to see what they do together.

Is it just me or Viktoria looks like Hayden Panettiere (blonde girl from Heroes)???

pamela said:
Aaah... The beautiful blonde couple of back stabbers, tho I want to see what they do together.

Is it just me or Viktoria looks like Hayden Panettiere (blonde girl from Heroes)???
Click to expand...

Yes, they're similar. Although I do think Victoria is better looking than her.

With the new coach, I like their chances for success.

first picture of the beautiful blonde couple together:
game over for Ilinykh / Zhiganshin ???

sky_fly20 said:
first picture of the beautiful blonde couple together:
game over for Ilinykh / Zhiganshin ???

Ok, so since they're a "beautiful blonde couple" the should beat in I/Z in every single competition?

Not training, they'll never get anywhere with an attitude like that :disapp:

FSGMT said:
Ok, so since they're a "beautiful blonde couple" the should beat in I/Z in every single competition?

Of course. Didn't you know that even Bazarova&Deputat will win over V&T because they are so cute together?

uhh said:
Not training, they'll never get anywhere with an attitude like that :disapp:

Right. Only eating and drinking. They're not serious, they will lose every competition.

Katasalapov / Sinitsina partnership officially approved ?
looks like Ilinykh / Zhiganshin are in huge trouble
Zueva has very nice things to say about the tandem

Skaters Victoria Sinitsina and Nikita Katsalapov a few days flew to Moscow to show preliminary developments of new programs in the art. In early June, the athletes will return to America and has already officially continue to prepare for the season under the leadership of coach Marina Zueva. In an interview FFKKR Marina Zueva told about new students.

Marina, where did your collaboration with Vika and Nikita?
With a phone call Nikita. It was during the second half of April, and, frankly, was a complete surprise to me. Nikita told about the situation and the desire to try to ride with Vika Sinitsina. In his words, I bribed professional reasoning.
I told him that I needed time to think. And the next day when Nikita called again, said yes. Guys did not hesitate, immediately flew to the United States, which confirmed the seriousness of their intentions.

At that time, the speech that you coach couples have not gone?
Of course not. Guys just wanted to get advice, consultation. It was kind of a trial, try to see what happens. As far as I know, before coming to America they once tried to ride together.

First training session that caught my eye?
Beautiful blue eyes partner and partner. When the boys came out for the first time on the ice and drove to a side, their blue eyes, in which there was so much depth, all fascinated. It may seem naive, such a comparison, but it seemed to me as if they came from a Russian fairy tale about Vasilisa the Beautiful and Ivan Tsarevich.
And if you leave the lyrics, then surely, the boys had a great desire to improve, to move on. After all, look, Nikita came to the U.S. for their money. Of the amount of prize money earned by performances at the Olympics, the skater has invested in his profession, in fact, to develop their talent. I think that is a trait that characterizes the new generation of Russian skaters. And, in my opinion, a pair of Victoria Sinitsyna - Nikita Katsalapov become the personification of a new image of Russia, the Russian soul.
Vick and Nikita - skaters different temperaments, which is good. One partner is a compliment to another.I think Nikita now looks mature man near Victoria. Previously, this was not. He looked younger than his partner. Now everything is a little different. But every dance is based on the relationship between men and women, and Nikita and Vicky skating it appeared.

You become an official trainer couple. Prepare athletes will be in the U.S.?
Yes, it is. Will train in America, because there is a system, perfected circuit training, have the necessary conditions for work.
Two pairs of your strengths Olympic champions Tessa Virtue - Scott Moir and Meryl Davis - Charlie White not officially announced his retirement.

Will they continue to perform?
They think. These two duets - a certain era in figure skating. And with the end of the Olympic Games in Sochi, we can say that this era is over. Athletes need time to think about whether they can reach a new revolution, find him the strength and desire. Whatever decision they did not take - it will be their decision. And the competition and never never stopped anyone.
Now Vick and Nikita train together with my American brother and sister disciples Shibutani. This duo distinguish skatannost, elegance, great ownership skate softness sliding technique, skill, control ... Many of these qualities Vick and Nikita will adopt.
On the other hand, Maia and Alex can borrow from the Russian pair expression, speed, expressiveness.And well, that will prepare two duets together.
Lately you have not worked with couples from Russia, what feelings are experiencing now?

I really wanted to train Russian couple, and I am glad that I will be coaching. And what kind of feelings?Previously, I had a responsibility to the talent, because talented pupils - it is always responsible for the coach. Now this was added responsibility to Russia.
Work ahead of us a lot. And when she was little? Of course, not all of them will be obtained. Inevitable ups and downs. But the potential is huge and Nikita Wiki. Plus the right attitude and professional approach. Everything from the daily routine and ending unnecessary detail, this duo is subordinated to one - self-improvement, which is very important.
Click to expand...

Victoria Sinitsyna - Nikita Katsalapov "look back in any case can not be"
Dancers Victoria Sinitsyna - Nikita Katsalapov after several weeks in the assembly in America returned to Moscow to present experts outline new programs. May 31 at Small Sports Arena Luzhniki athletes will take part in a charity concert for the first time brought before the public, with an indicative number.


Guys, it was difficult at first to get used to a new partner, a new environment?

Nikita: From the first moment, once arrived to the Marina (Marina Zueva coach) I immediately felt that we were in their situation. I will not hide, before the trip worried a lot of thought, as everything will be in place and realized that my expectations were met. And justified even a little more than planned.
Marina is very competent coach. In part, she even took on the role of mothers, because worries about every little thing. The training process was very rich, versatile. Adapt to one another was easy. We immediately began to make not only the basic steps, some things, and everything. And two weeks all professionals who have worked with us, came up and said: "Guys, the feeling that we know if ten years."

Vic: I attribute this to the fact that all the training was on the positive. I helped Nikita and Marina. All of them helped. Advised what to do and how, and it adds confidence.
Nikita: Vic - big fellow. All coaches are delighted with it. She brilliantly captures all. She needs a little stand on the sidelines, most think about it, and then starts to do. Vick really gave a lot of advice because she was in a difficult situation, had much force. You can only imagine how she felt. But the positive atmosphere that accompanied that Vick quickly emancipated, opened. It is evident that she is eager.


What for you was the main difference in the preparation?

Nikita: The system of training in America is very different from Russian, despite the fact that many of our coaches are now trying to get close to what the Americans are doing, Canadians. In the first half of the day workout here, a lot of training, which has a huge number of specialists. Each of these monitors and controls its direction. And this, incidentally, very competently.


When you lead a coach, and he works with athletes for a long time, it is often "eye zamylivaetsya" some things are not felt. Like the right thing to do, and something is not right

In America Marina workout in "3D." Pile eyes every coach brings something different, explains says. This process draws: you start to look at yourself if from the outside, which is very valuable, because no small thing does not go out of sight.


On programs already thought?
Vic: As for short have ideas. Put the show room, which helps us to roll. According to Marina, this room is visible to the soul of our couples.


Continue to train in America?
Nikita: Despite the fact that it is away from home, but the group Marina we very comfortable feel. And then we came here for the result, in a short time to recover all the positions and become truly a pair.


Do you regret anything?


Nikita: None. On my part it was a deliberate act.
Vic: look back in any case impossible.
Nikita: I agree.
Click to expand...