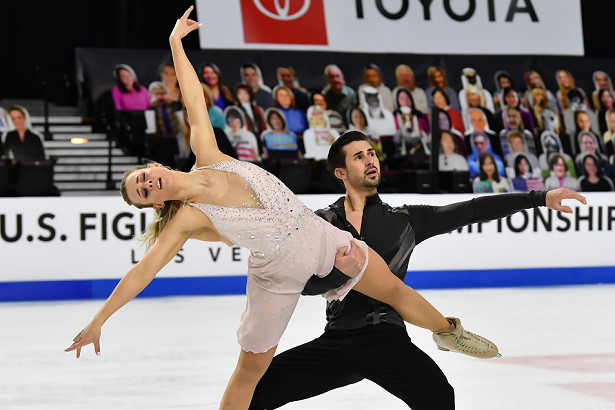 Hubbell and Donohue racked up tons of high positive grades of execution (GOE) in their expressive performance to “Hallelujah” in which the lifts, one-foot steps, circular steps, and twizzles were graded a level four. The two-time national champs scored 134.90 for first place in the Free Dance and overall (224.56 ), edging out Chock and Bates who were first after the Rhythm Dance.

“You guys can’t tell because of the masks, but we’re smiling like a monkey with a new banana!” Donohue laughed. “We are pretty thrilled to be here with this awesome opportunity. It feels amazing to be back in Vegas.”

“Third-time national champion as a really nice ring to it,” said Hubbell. “We worked really hard this year and throughout the struggles it’s been a really productive year for us. It was not the easiest performance, we definitely had to just stay calm and skate on, but we couldn’t be happier to be here and accomplish this big goal.”

All of the top three teams train under Marie-France Dubreuil and Patrice Lauzon in Montreal. One of the things Hubbell and Donohue appreciate about training with them is that they, the coaches, are never close-minded regarding new possibilities and new experiences and bringing new people into the team.

“Working with Scott Moir this year was such a pleasure, and it takes an amazing coaching team to bringing in new ideas and new talent and always evolving,” acknowledged Hubbell. “Passion and desire to keep improving themselves as coaches is what makes all of us thrive.”

Chock and Bates put down a technically strong performance, but Bates had a slight stumble on the twizzles. Their mesmerizing routine was otherwise flawless, with all other elements receiving a level 4 with positive GOEs including the three lifts, spin, and steps. They scored 132.83 points for second place in the Free Dance and slipped to second overall (222.93) by less than two points.

“I’m just really proud of Maddy… and myself,” said Bates, to chuckles from the press. “We really did a lot of great things in both performances. There are a lot of positive things we showed and a lot of growth in our skating and commitment to improving. I think were are going to be optimistic and stay positive and focus on what we did well, which was a lot.”

Chock and Bates feel that it’s “amazing” to think of the number of coaches they have in Montreal and how collaborative they are.

“Even if we want to bring someone else in, there are no egos,” Bates pointed out. “It allows for this incredible synergy between different specialists, and we all benefit from that. I think they don’t try to make a ‘cookie-cutter one-size-fits-all’ approach to any team. They took some time to figure out what would look good for us. We are a team that we have a larger height difference and different look than most teams. Quickly we were able to find some material that worked for us and we kept if for another year.

Chock agreed, adding: “They are really great at highlighting your strengths and making your weaknesses strengths, too. They get to know you and they put together the right material and right piece for you. It’s really special.”

The team withdrew from Skate America due to loss of training time, two time and reigning US champions, 2015 World silver medalists,

Hawayek and Baker showed strong level-four one-foot steps and lifts in their routine to music by Philip Glass. The twizzles and spin were also graded a level four and the 2018 Four Continents Champions finished third (127.27) in the Free Dance and overall (212.55).

“We’re quite proud of our performance,” said Baker. “We really take each opportunity to perform, especially this season as a building block for us. As soon as we finished we both looked at each other and we were quite happy, but as I said, we use it as an opportunity to grow. We trained really hard for this event as we have this season. Working with a lot of adversities and obstacles, but who hasn’t? But it’s been exciting to hunker down and focus at an event like this.”

“I think we are both really proud of the consistency we are continuing to build and the persistence we have, because we train amongst four incredible and talented athletes,” added Hawayek. “Both of us are incredibly hungry as well. We’re both driven to continue to keep pushing them as well and I think we’re really proud the way we are stepping into our own team.”

In terms of training, the team felt this season was special in their creative process as both ice dancers have wanted to tell a story; something they’ve wanted to do in previous years.

“It’s what we love about skating,” said Hawayek. “I think we poured so much into creating these specific characters and images that we wanted everybody to understand so clearly. The thing we really embraced this year was letting go of that a little bit and allowing ourselves to create art; something that came from within us and not having any expectations for how other people viewed it and take what they wanted from our program. It’s a lot more rewarding at the end of the day to finish the program and feel like it came from within us onto the ice rather than to hope that people understood a program.”