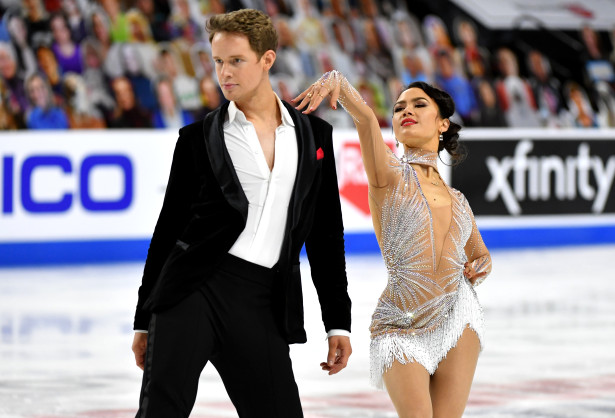 Defending champions Madison Chock and Evan Bates edged out Madison Hubbell and Zachary Donohue by a less than half a point in the Rhythm Dance at the 2021 Toyota U.S. Figure Skating Championships in Las Vegas, Nev. Kaitlin Hawayek and Jean-Luc Baker, the two-time and current bronze medalists are in third.

Chock and Bates, who withdrew from Skate America due to loss of training time earlier this season, delivered a very solid dance to music from Too Darn Hot by Cole Porter. They showed level-four Finnsteps (all key points met), pattern steps, straight-line lift, and diagonal steps. The only level three came on Chock’s twizzles while he received a four. The two-time and reigning U.S. champions topped their previous record score with 90.10 points to take first place.

“It’s so good to be back in a skating competition and turn the page on 2020 and have a new year,” said Bates. “We are full of optimism and part of that is because we have this opportunity to compete thanks to US Figure Skating and we feel very safe and very happy to be here.”

“It felt really good to be able to get on the ice and give a strong performance because we’ve been working very hard in training and putting our best selves on the ice every practice,” said Chock. “We’ve been surrounded by incredible training mates and a supportive team that has helped us navigate through these uncertain times and really come out stronger. We’ve been able to apply all the things we’ve been working into our performance and we’re happy to back at competition.”

“As far as the record goes, that’s not really something that we think about,” said Bates regarding setting a new record score in the Rhythm Dance at U.S. Nationals. “It’s a cool fact, but I really think that score is so relative. Rules change over the years and it’s still a really close competition. It’s going to come down to the Free Dance. We are reprised our Free Dance from last season with a few improvements and we’re really looking forward to it.”

Hubbell and Donohue put out an equally strong performance to music from Burlesque, but the Finnsteps were only graded a level three. Nevertheless, the twizzles were extremely well done and received a level four with many positive GOES, as did the level-four pattern steps, midlines steps, and rotational lift. The two-time and former U.S. champions currently sit in a close second with 89.66 points.

“It was a very different technical performance,” said Hubbell when asked to compare their performance to the one at Skate America. “We put a lot of work into this program for the last couple of months and we had the goal to go full out without getting tired which we find here in this dry climate a little bit tough. We really wanted to show our power and speed and not play it safe. I think technically we did ok, but I think compared to Skate America, it showed our skating quality. We did what we could today and we’re proud of that.”

Regarding the costume change since Skate America, Hubbell was clear that the yellow dress was not what she wanted to compete in. They knew right away that they were going to change the dress.

“From the very beginning, when I saw Burlesque in theatres with my mom, we both loved the number that Kristen Bell does to Dr. Long John wearing this kind of unitard (Donohue chimes in with ‘body stocking’),” said Hubbell. “I absolutely loved it then, I just wasn’t sure how to make it work with the rules. Luckily, Elite Expressions from Montreal helped us make this vision come to life and I feel quite fabulous in it.”

When asked what would happen if Worlds were cancelled, Hubbell stated that their goal is to win the Olympics. The bigger question in her mind is when or if the Olympics will take place.

“Every opportunity that we have to compete until then is a chance to push ourselves into giving the performance we’d like to at the pinnacle moment of our career,” she said.

Hawayek and Baker entertained with their lively dance to selections from Saturday Night Fever, producing level-four pattern steps, twizzles, midline steps, and curve lift. The Finnsteps were a level three with three key points met, and the 2018 Four Continents Champions sit comfortably in third place with 85.28.

“We were really happy with the performance we put out today,” said Hawayek. “It was one of those ones where we felt like we fought for it the whole time, but that’s why we train the way we do, so that we can say at the end of the day, ‘no matter how it feels, it can still be a super strong performance’ and I think that showed.”

“It was quite good and what we trained at home,” said Baker. “Kaitlyn and I have started to approach our training in much more mindless effort now. Our coaches lead that way. For instance, there’s run-throughs in a ‘flow state’ where you don’t really know how you got from beginning to end. There there are run-throughs where you you have to consciously aim your attention at one another.

Caroline Green and Michael Parsons were strong in their routine to “I Turned the Corner” and “What Do I Need With Love?” from Thoroughly Modern Millie. They young team garnered a level four on all elements, earning the second highest score in the total base value. They are in fourth place with 80.10 points.

“This type of program is comfortable to me and let’s me enjoy myself and my partner,” said Parsons. “I think we grew a lot because of it.”

The Ice Dance category will conclude on Saturday with the Free Dance.