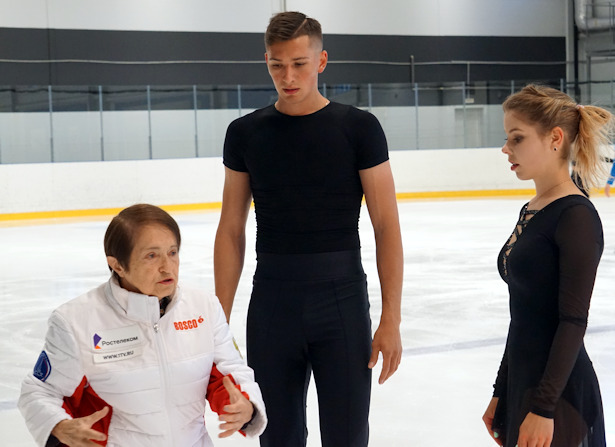 When Russian pair skaters Anastasia Mishina and Aleksandr Galliamov travelled to their very first ISU World Figure Skating Championships last March to Stockholm, Sweden, they had a simple goal: to skate as well as they could and to leave a favorable impression as a new, up and coming pair. The young team certainly did not plan what happened on Swedish ice. They struck gold, and in doing so, became the first “newcomer pair” to achieve this feat since their compatriots Ekaterina Gordeeva and Sergei Grinkov managed to do back in 1986.

On their way to World gold, the team overtook such accomplished competitors as two-time World Champions Wenjing Sui and Cong Han of China as well as their teammates, 2020 European Champions Aleksandra Boikova and Dmitrii Kozlovskii and two-time World silver medalists Evgenia Tarasova and Vladimir Morozov.

This title was the biggest surprise in Stockholm and it stunned the skaters as well – they had just skated their best and happened to be better than everyone else. Five months have passed since this spectacular debut, and Mishina, 20 and Galliamov, 21, are busy preparing for the upcoming Olympic season. They actually started right after Worlds.

The skaters went to Sochi in June for a training camp together with their coaches Tamara Moskvina and Artur Minchuk. Other teams were in the group, including Boikova and Kozlovskii. It wasn’t quite so hot yet, which Mishina prefers, while Galliamov likes it hot. He was amazed to see how his partner went swimming.

“The weather was not the best for swimming in the sea, the water was very cold, because it was raining,” he explained. “And I saw how Nastia happily went into the cold water. I was freezing just from watching this.”

The 2021 World Champions also worked with their choreographer Nikolai Morozov while at the training camp.

“We mostly worked with him and obviously we started doing elements and getting ready for the season,” Mishina noted. “We worked on some interesting exists from the lifts, so that we are not doing the same every year.”

Galliamov agreed: “We want to show something new, because people probably remember us because of our performances in the past season. We want to be different from last season.”

He added that they got some help from Ksenia Stolbova as well, with whom they’ve worked with before Worlds. “We really liked working with them,” Galliamov continued. “When something like a transition is not comfortable, Nikolai definitely takes the time to make it not only comfortable, but also to make it look nice.”

Mishina pointed out that it is a plus that Morozov has been working in the USA. “His style is probably closer to the American style than to our Russian style. We didn’t work like that before and it’s interesting,” she noted. “It was something new for us and we took in a lot so that we can try to realize it in our skating.”

The skaters and coaches made the easy decision to keep their successful Short Program to La Esmeralda, but obviously adapted it to the new season as a different lift and deaths spiral are required. They also freshened up the choreography.

“We changed some transitions, the step sequence and polished our program,” Mishina offered.

“We really like this music and we feel just wonderful in this program,” Galliamov added. “We will be happy to show the fans a renewed version of the short program, a remake. We can’t wait for the spectators to see it.” 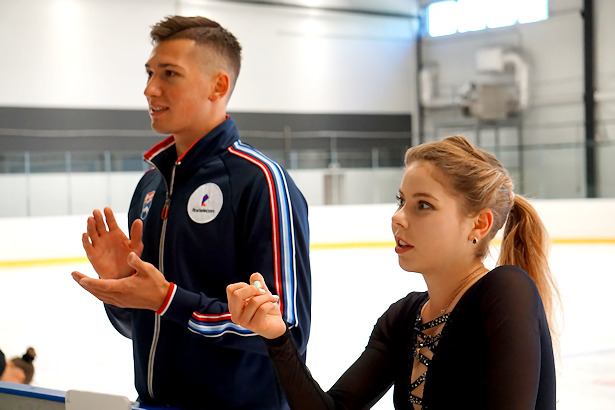 The Free Skate is new. The music, “Snow Storm” and “Time, Forward!” by Russian composer Georgi Sviridov, was a suggestion by coach Tamara Moskvina.

“This program is in a completely different style, it is more grown up,” Galliamov said.

“We wanted to show a new style and choreography,” Moskvina added. “In the first part, the romance, they are young people occupied by their emotions and lyrical feelings for each other, while in the second part they storm forward to realize their dreams. Time is moving forward and the youth is striving for something new and different than the past generation. They portray the joy of life with energy and want to make people happy.”

The coach added that she showed the music to some experts in the figure skating world, who approved of her idea.

To bring the character of their program across, the 2019 World Junior Champions aim especially on improving their speed and power.

“We want our programs to be faster and fly more,” Mishina stated. “We’re trying to show that in our first test skates. It is our goal to skate faster and with more ease.”

Galliamov agreed: “For our elements to blend in with the transitions, we need to skate with full power and to be with the music as well. It is not enough to give everything only for the elements. We are at the senior level after all, and we need to pay attention to absolutely everything.”

Mishina and Galliamov now enter the Olympic season as the reigning World Champions. It is important for the young team to prove that winning the World title was not a fluke. They want to keep growing technically and artistically – and at 20 and 21 years of age they are very young for a top pair. Obviously, they are not regarded anymore as a “young and promising team,” but as contenders for the Olympic podium. It is a whole new game for them, but they are trying not to let the new-found pressure affect them.

“For us, we are approaching this season as usual, without special changes,” Mishina observed. “We don’t think about having won the World Championships, because this already is in the past. We don’t think about the Olympic Games either so far – this is in the future; this is not now. We are preparing as usual, like for a usual season.”

“We have the test skates coming up next month in Chelyabinsk, and there is not so much time left,” Galliamov said. “This time is passing fast and we need to succeed in preparing everything to the necessary level in order to be competitive with the other pairs.”

The team has been slated for the ISU Grand Prix events NHK Trophy in Japan and Rostelecom Cup in Sochi in Russia. They plan to attend Challenger events before that, but were not sure yet which ones they will get assigned to. Most of all, they hope to have a full and more normal season.

“We hope that things are slowly getting back to normal and that maybe they let in at least maybe have of the spectators like they did at the World Team Trophy in Japan,” Mishina said. “And maybe they’ll let us out into the city. It is a shame to travel far and not to see anything from these countries.”

Both skaters like to explore new cities, visit museums, and see the architecture.

“When we were in Stockholm or in Osaka, you kind of look at the map and you see – yes, you are in Sweden or in Japan. But other than that, you don’t really feel that you are in another country. I really would like that they let us out and to see the cities,” Galliamov pointed out.

Currently, they enjoy their hometown St. Petersburg and discover new places there. For example, Galliamov recently went to a private zoo with domesticated raccoons. More fans start to recognize the skaters when they meet them on the street.

“That happens even in unexpected places such as the theatre or the subway,” Mishina noted.

Some fans approach the skaters and ask for an autograph or a photo, others are too shy for that and just send them a message on social media that they saw them. The skaters appreciate that attention and can’t wait to perform again for the fans.