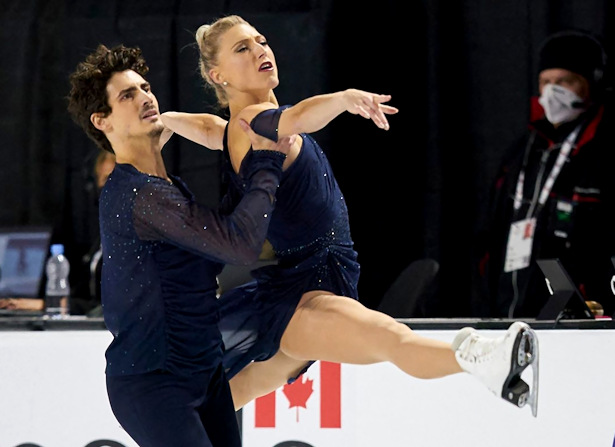 Piper Gilles and Paul Poirier of Canada took their second consecutive gold at 2021 Skate Canada on Saturday in Vancouver, BC, in the Ice Dance event. Italy’s Charlene Guignard and Marco Fabbri won the silver, while Olivia Smart and Adrian Diaz of Spain pocketed their first Grand Prix medal, the bronze.

Gilles and Poirier laid down a great performance to “Long and Winding Road” which was littered with positive grades of execution (GOE) across the board for all elements. The diagonal steps were only graded a level two and she received a level two on the one-foot steps while he a level one. However, the twizzles, lifts, and combination spin were graded a level four and the world bronze medalists finished first in the free dance and overall (125.32/210.97).

“Paul and I are very proud of what we did,” said Gilles. “It wasn’t our best skate, but we had nerves as we aren’t used to skating last. Our overall experience is it was nice to be with other competitors and enjoy the sport. I actually think it’s nice that we aren’t skating perfect as it gives us room to grow. We are starting to trust our training and ability. We are just coming into our own.”

“As we go through the competitions, the skates will get higher and higher as we get closer to the games, and with that will come pressure,” added Poirier. “So winning a grand prix title is a big deal. We are really going to enjoy this victory and when we get home, we’ll set our sights on what work needs to be done.”

Guignard and Fabbri produced a fantastic level-four stationary-rotational lift in their routine to music from the Atonement soundtrack, as well a level-four combination spin and curve lift. She received a level four on the twizzles while he got a three, but the GOEs were still very high and the circular steps were graded a level three. The 2021 Lombardia Trophy Champions finished second in the free dance and overall (121.23/200.05).

“It wasn’t super easy to compete here because of jet lag,” said Guignard. “Tonight it was better than yesterday and more rewarding. The crowd was really nice and it was nice to finally perform in front of people.”

“We kept last year’s free dance because we only performed it one major event,” Fabbri pointed out. “We really enjoy performing it, we didn’t want to abandon it for Olympic season. We wanted to change some aspects and change the dress because we wanted to give it a different impression. We wanted it to be more elegant and we are looking forward to the next competition with the feedback we get from this competition.”

Smart and Diaz maintained their third place after the free dance and overall (115.96/192.93). The 2021 Autumn Classic silver medalists performed to music from The Mask of Zorro soundtrack and showed strong level-four twizzles and level-two one-foot steps. The circular steps were graded a level two, and the stationary-rotational lift was graded a level one and three. The curve lift and combination spin was a level four.

“We’re feeling good and happy to take home our first Grand Prix medal,” said Smart. “We are shocked on some of the levels and not sure why yet, but we will review and work on it. We know we could have gotten two or three more points, but we are happy!”

“It’s taken a different type of strategy after last season with Covid,” said Diaz on their approach to this season. “We’ve gained a whole new outlook on our relationship. We knew we had to have the right vehicles (programs) going into the Olympics and we are trusting our team and organization.”

USA’s Caroline Green and Michael Parsons earned a level four on their twizzles, their three lifts and combination spin. The one-foot steps were graded a level two, as were the midline steps, and the 2021 Autumn Classic bronze medalists finished fourth in the free dance and overall (114.11/186.51).

“I feel like our performance was representative of all the hard work we put in after ACI and the development of this program,” said Parsons. “We can do so much more and we are taking little steps toward that. We are really happy with it. We both wanted to show how much we’ve grown. After we got comfortable with each other, we decided to do something a bit different.”

Diana Davis and Gleb Smolkin of Russia, who stood in seventh after the Rhythm Dance, placed fifth in the Free Dance and overall (109.91/180.57). Their routine to Moulin Rouge featured level-four twizzles, combination spin, curve lift, and a very good stationary-rotational lift.

“It was amazing!” said Lagha. “We didn’t get the score and placement we wanted, but the standing ovation was great! We will go home now and prepare for the next event (NHK Trophy). We want to show energy in this program.”

Lilah Fear and Lewis Gibson of Great Britain had a few mistakes in their routine and finished seventh overall (106.19/178.08). The team later told the media that they chose music from the Lion King it’s “universal” and the story and theme is about “finding your inner strength.”

“Our competition here is not what we wanted to do, but we felt strong and connected in the free dance,” said Gibson. “We had a costly error at the end.”