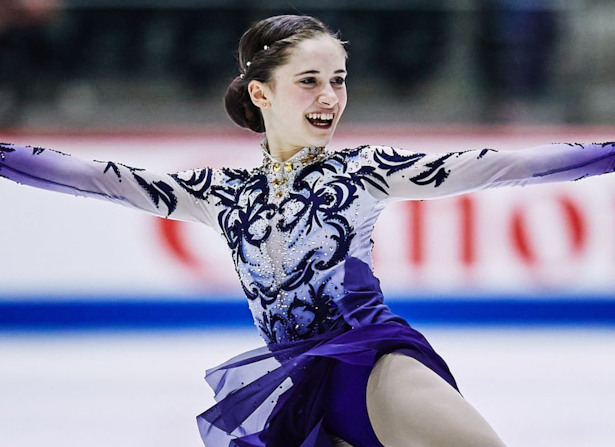 Levito received an edge call on the front-end of a triple flip-triple loop, but the five other triple jumps were clean in her routine to Swan Lake. The 2021 Junior Grand Prix (JGP) Courchevel II Champion earned many high  grades of execution (GOE) on most elements, in particular, her level-four spins and level three footwork. She finished second (134.05) in the free skate, and with a total score of 206.55, held on to first place by just over half a point.

“Honestly, you know, we put all the work in in our training, so when we get to the competition, we’re really just collecting our scores and our medal,” said Levito of her win. “So to me, I mean, our medals are just a reflection on our training and how well we did with our nerves.”

With the pressure on, Levito new she needed skate clean and admitted to being more nervous than usual.

“I was very in the moment,” she said of the last half of her program. “For me to think about everything that I thought about in my program, which felt like it went by so fast, it’s really hard for me to recall, but I just focused on one element at a time  until the music ended.”

Levito hasn’t decided yet if she will move up to the senior level. “I’m definitely going to continue to work and improve my technical elements, along with my component scores as well,” she said.

Shin put out a stellar performance to  “Love Me If You Dare” which featured seven solid triple jumps, including a triple Lutz-triple toe. Every element of her program earned many high GOEs, including three level-four spins and level-three footwork. The 2021 JGP Baltic Cup bronze medalists scored a new personal best of 136.63 for first in the free skate and second overall (206.01).

“For me, winning a medal in my first Junior World Championships, that makes me so happy!” said Shin, who just turned 14 last month and is one of the youngest skaters in the competition. “The first Junior Worlds is very special and of course for me I was very, very nervous competing, but I just did what I had to do.”

All three South Korean competitors finished in the top six, and Shin felt it was a very happy moment.

“Not only the competition, but being together in the practice sessions,” she said. “We support each other and their big help really cheers me on for the competition. Personally, I really leaned on their help because I’m the youngest and they are older and we are pretty much like sisters, so we bonded together in Tallinn.”

Thorngren put out a great performance to music from The Queen’s Gambit, racking up many high GOEs throughout. The only errors were an edge call on the front end of a triple flip-triple toe and a solo triple flip. The the other jumps were solid, including a triple Lutz-triple loop and the 2021 JGP Courchevel Champion earned a level four for all three spins and footwork. She scored a new personal best of 133.28 to finish third in the free skate, and with a total score of 199.42, rose one spot to claim the third spot on the podium.

“I agree with Isabeau (Levito),” said Thorngren what her medal means to her. “The medal is a reflection of our training and how hard we’ve worked this season, and I’m really happy about the medal, too.”

“I think we just have a really strong team and we’re all really supportive of each other,” she said of the other U.S. skaters. “We did really well this week so, yeah, I’m really proud of our team.”

Thorngren loved the movie The Queen’s Gambit and wanted to portray the main character, Beth.

“So basically in the show, her mom dies and her dad leaves her, so she’s like an orphan,” Thorngren explained. “She falls in love with chess, competes and she fights to win a chess game. So in my program, I’m fighting to land all my jumps and skate cleanly and perform the best I can. I’ve played (chess) with my family before, but not competitively.”

Ahsun Yun of South Korea landed a total of seven clean triple jumps in her quality skate to music from The Mummy Returns, including a triple Lutz-triple toe. The 15-year-old from Namyangju City was also rewarded a level four for her footwork and two spins to score a new personal best of 129.59 points. She finished fourth in the free skate, but with a total score of 195.87, slipped off the podium to fourth overall.

Teammate Seoyeong Wi received an edge call on the front-end of a triple flip-double toe and took a fall on her final jump, a double Axel, but was otherwise solid. The 2019 Asian Open Junior Champion landed a a solid triple Lutz-triple toe, which earned many high GOEs, and four more clean triples. She also earned a level four on two spins in her dramatic routine to “Tristan and Isolde” and finished sixth in the free skate and fifth overall (120.63/186.72).

USA’s Clare Seo finished fifth in the free skate with a new personal best score 122.20. Her solid performance to music from Cirque du Soleil featured six clean triple jumps and three level-four spins. The only error was an edge call on the back-end of a double Axel-Euler-triple flip. The JGP Courchevel bronze medalist moved up from 10th to sixth overall with a total score of 182.81.

Kimmy Repond of Switzerland showed great attack and determination in her routine to “Exogenesis Symphony” by Muse. She landed a triple Lutz-Euler-triple Salchow as well as four more clean triple jumps, but stepped out of a slightly underrotated triple Lutz and two-footed the landing of a triple flip. However, all three spins were graded a level four and the 2021 NRW Trophy Junior Champion scored a new personal best for both the free skate and total score (116.28/177.10) to finish seventh overall.