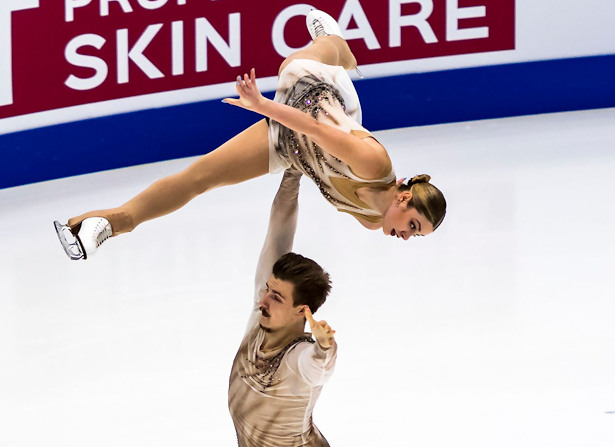 Sofiia Holichenko and Artem Darenskyi of Ukraine perform during the ISU European Figure Skating Championships at on January 12, 2022 in Tallinn, Estonia.

When Russia invaded Ukraine, pair skaters Sofiia Holichenko and Artem Darenskyi were at home in Dnipro — a city on the Dnieper River in central Ukraine.

“I woke up at about five in the morning from explosions,” recalled Holichenko. “Artyom called me and said that the war had begun and I immediately called my parents, because they were in Kyiv which was constantly being bombed. I was very worried about my family and friends. We tried to keep in touch as much as possible. It was scary!”

The team left Ukraine to compete at the 2022 World Figure Skating Championships where they ultimately withdrew. They then went to Poland for a bit to train before returning to Dnieper in May to resume training under their coach, Liliia Batutina.

“Many people left,” added Holichenko. “Friends, relatives, and there is no opportunity to see both friends and parents. I have not seen my father for a very long time, the last time in February. It breaks my heart for what the Russians did to Mariupol, Kharkov, Bucha, Gostomel, and many more cities. We all hope that this will end soon. We will also work hard to adequately represent Ukraine in competitions. To prove that we are fighting, we are strong and Ukrainians will cope with everything!”

Holichenko’s father is serving with the territorial defense in the city of Kyiv, while Darenskyi’s father is in the Ukrainian armed forces.

“What is happening now in Ukraine should not happen anywhere else,” said Darenskyi. “People should realize that war has not changed, it will always be tragic  and bloody. Civilians and children will always die. People in Ukraine are not thinking about vacation on the beach. They are wondering if they will be alive tomorrow or if their relatives are alive. Each day rockets and bombs arrive in many cities and no one knows where they will fall.”

When not training, Darenskyi runs a football (soccer) team to collect money for the frontlines of the Ukrainian army.

“Before the war, I played on the Falcon football team,” he explained. “When the war began, half of the team went to serve in the army. A whole squad was wiped out, killed, and at at the moment, two people from the team are in hospital with injuries. I’m now playing on a new team that raises money to help the military. We buy helmets body armor, clothes, and so on. Every Saturday we play in a tournament that collects money and it also helps to distract civilians from the war so that they get some emotion besides the war.”

The 2022 National Champions are hoping to compete this upcoming season and are currently working on new elements and programs.

“City Hall has given us ice for free and this helps very much!” said Darenskyi. “Our goal is to show that there is figure skating in Ukraine and it will develop despite the war. We also want our people to see that athletes are also fighting. We want people to know what is happening in Ukraine.”

Holichenko and Darenskyi will use the short program from last season set to “Alive” by the Ukrainian group The Hardkiss, while the free skate will be to a cover compilation of compositions from Nirvana.

“It was a gift from Hugo Chouinard,” Holichenko said of the short program music. “He arranged this music for us and we performed it at the 2022 World Championships. We liked it very much and we decided to leave it for the next season.

“For the free skate, we thought about this music for a long time,” she added. “We liked it and we wanted to put a free program under it. We were offered more options and we put together several compositions.”

The young team made their international debut at 2021 Nebelhorn Trophy — a Challenger Series event and qualifying event for the 2022 Olympics. They followed up with all new personal best scores at the 2022 European Figure Skating Championships.

The team missed their debut at the 2021 World Champions as they tested positive for COVID-19. This past year, Holichenko and Darenskyi did not have much time to train due to the invasion, but they pushed through an exhausting six-day trip through several countries in order to compete in France. They withdrew after their short program which received a standing ovation from the audience.

They are now currently working to improve various elements for next season, including jumps, spins, and transitions.

“We are working on a new lift for the free skate and want to improve the levels on the twist,” said Darenskyi. “We are also learning side-by-side triple flips.”

“And learning the back-inside death spiral,” added Holichenko. “We are trying to improve the level in the forward-inside as well.”

Despite living and training in a war-torn country, the team, along with many other Ukrainian athletes, are pushing forward with nerves of steel.

“I am motivated and pushed by my friends, relatives and those people who are dear to me,” said Darenskyi. “They really want to see me at competitions and I want to represent my country at many competitions.”