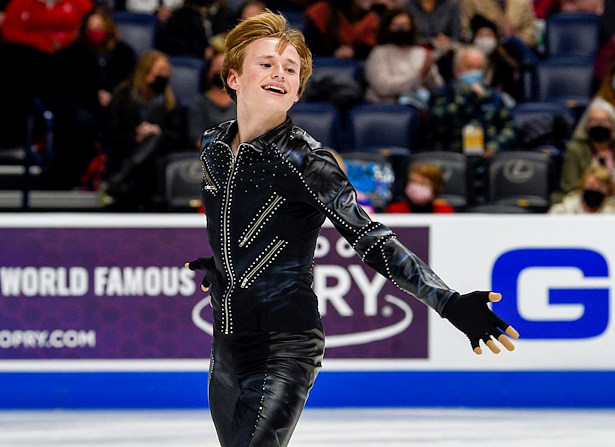 Ilia Malinin performs during the Men’s Short Program at the U.S. Figure Skating Championships on January 8, 2022 in Nashville, TN.

There are the quad kings, but now there is a “quadg0d” – an epithet American skating phenomena Ilia Malinin picked for himself on Instagram. The 17-year-old caused quite a stir when he landed a quad Axel in training – an element nobody has yet performed a clean execution – competition or otherwise. Japan’s super star Yuzuru Hanyu of Japan went for the quad Axel at the 2022 Beijing Olympic Winter Games, but wasn’t able to land it. Before him, Russia’s Artur Dmitriev Jr. (the son of two-time Olympic Pair Skating Champion Artur Dmitriev) tried it, but missed as well. To date, Malinin’s jump is the best that has been seen so far.

The quad Axel was on the top of the agenda of the 2022 World Junior Champion who likes to entertain his fans with crazy jumps.

Malinin has made a lot of progress technically since his debut at the 2020 ISU World Junior Championships where he ranked 16th.

“I think there isn’t really a secret to just easily learning quads,” he said. “It still takes a lot of time and effort, but I think from the start of quarantine, I would do a lot of off ice. I’d be doing off-ice triple Axels and start learning off ice jumps like off-ice quad Sals, off-ice quad toes. When I got on the ice, it was a bit easier to transition and I got my Sal consistent. Then I got the toe loop and then Lutz, loop and flip.”

The 2022 U.S. silver medalist was working on his quads at the end of the season, playing around with different quads and combinations, but what will be in the program depends on the rules and consistency. Now, of course, the teenager is eager to include the quad Axel and make history by becoming the first one to land it in competition. However, that is not his only goal.

“I really want to show that I’m unique – not only in jumps,” said Malinin. “Hopefully I’ll put in the time and effort to improve my skating skills as well my spins so that I also have a second score that’s a lot bigger than it was this year.” The skater admitted that these elements “need a little bit more effort.” “But overall, if you just think about doing jumps, that’s not your maximum potential. So once you start learning the jumps and the jumps become easier, that’s when you can start incorporating more choreography or a lot more for the components.”

The skater is coached by his parents, Tatiana Malinina and Roman Skorniakov. Both are Olympians and originally from Russia, but represented Uzbekistan internationally. Malinina won the inaugural ISU Four Continents Figure Skating Championships in 1999 as well the ISU Grand Prix of Figure Skating Final, thus being the most successful Uzbek figure skater so far. Malinin is bilingual in English and Russian. Being coached by your parents has its advantages and disadvantages, as both parties point out.

“Well, definitely a disadvantage is that it kind of like takes away time from other skaters that pay them because obviously you get free lessons,” the practical young skater noted. “On the other hand, it’s easier to connect and relate to everything. When you’re having a rough day, they are able to connect with you more and just help you out a bit more. They won’t be as clueless as if you didn’t have your parents coaching you.”

Malinin’s father agreed: “On the one hand it is very difficult (to coach your own son), but on the other hand it is easier for us. My wife is working with him and then I can work with him and we are doing it together; that helps us. Obviously, conflicts happen. When something doesn’t work for example, we might get upset and he might get upset, but after some time, we get back at it again.”

It is also not easy for the family to get away from figure skating as they are all involved into the sport – even Malinin’s seven-year-old sister Lisa has taken up skating.

“It is hard to get away from skating,” Skorniakov said. “At home, Ilia has his own room, that helps. We are trying to separate (private life from skating), but I don’t know if it always works out.”

“Usually I don’t separate it really,” Malinin explained. “It’s kind of like all just one thing. I treat them like a coach or parents both ways at the rink or at home. It depends on the situation. But usually at home, we’re mostly talking about stuff at home. At the rink, we talk a lot about skating.”

“His parents approached me and asked if I would help and I was happy to!” said Arutyunyan.

“Raf was there because I think Nathan was on the practice ice and I was about to compete,” Malinin recalled. “My parents are good friends with Raf, so Raf wanted to watch me. I didn’t really do as good that year, but he said that I had potential.” The 2022 World Junior Champion, who is still studying in high school, visits Arutyunyan in California during school holidays to work with him.

“I talk regularly on the phone with Ilia, as well as his parents,” said Arutyunyan. “He has improved dramatically since I first watched him a couple years ago. We are already talking about going further and I would really like to see him work with Shae-Lynn (Bourne). She is such a unique choreographer and person and I think she could really take him to the next level.”

The coach went on to say that Malinin’s spins, basic skating skills, artistry, and presentation will improve with time as he matures.

With Malinin growing up, he has more input into his training and programs.

“My parents used to decide what elements to do, and then they usually make an entrance for each element, just like a base pattern,” he shared. “And from there we go to the choreographers and they’d add steps and everything. But this year, I think I’m going to choose the layout for the jumps. I’m still working on it right now.”

For the 2022-23 season, the skater wants to change both programs. He is thinking of doing a Swing or Jazz style piece for the Short Program and slower music for the Free Skate, maybe even Japanese music.

“Not exactly because Worlds is in Japan,” Malinin said of the Free Skate music, “but because I had a program that was in Japanese style and it kind of didn’t work out. So I kind of want to redeem it.”

The teenager, who is interested in interior design, drawing and skateboarding, wants to develop his skating and continue to push the limits.

“Jumping is really my strong side and I think I’ll be well known as a really good jumper,” Malinin pointed out, “but if I want to potentially have a good result at the Olympics, I think I need to improve the other aspects of my skating.”