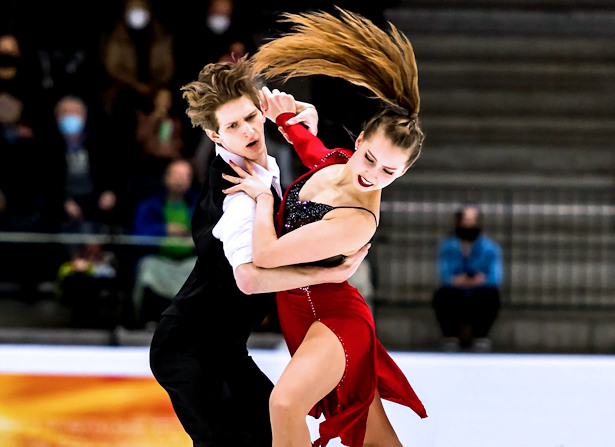 Mariia Holubtsova and Kyryl Bielobrov of Ukraine perform their Free Dance at the 2022 European Figure Skating Championships in Tallinn, Estonia.

Mariia Holubtsova and Kyryl Bielobrov, who live and train in the capital of Kyiv, were both asleep when the bombing began on February 24, 2022.

Prior to the invasion, the 2022 World Figure Skating Championships were just ahead and it wasn’t clear at that time if they would attend. They were training to go as the primary or alternate team as they had had a successful season and were looking forward to ending it with a great performance given the chance.

Months before the invasion, Bielobrov and his family had been discussing that there was a potential for war and had most of their valuables, documents, and other essentials on hand.

“I woke up for my morning practice and the first thing I saw when I picked up my phone was that war had begun,” said Bielobrov. “I immediately wrote my mum a message (she was upstairs) that the ‘war has started’. On this day we were constantly hearing explosions. I was very scared and had never experienced that much stress. I was checking the news every few minutes and was hoping that it would end in a few days, but of course it never happened.”

“After a few days, me and my family left our home to go to a safer place in the center of Ukraine,” he continued. “The path that usually take us about two hours took us about six because everyone was trying to leave the city and it caused a lot of traffic. I think we spent about one month there until I got a permission to leave Ukraine as an athlete. It was very hard to leave my parents without knowing if I would ever see them again. From the place where we were staying to the border is about 400 km and it was a very scary drive. There were a lot of road blocks every few kilometers. The bus was stopping on every block post and the guards were checking our documents and what was inside the bus. In the end, I was able to leave Ukraine without major problems.”

Holubtsova was at home sleeping when she was awakened by the strong explosions. Although frightened, at first she didn’t give much importance to them, and reassured herself thinking they might be military exercises.

“But then I realized that something was wrong and went to the window and saw small flashes,” she said. “Only later did I realize how stupid and dangerous it was since the window could burst from any of the explosions and injure me. At some point, I felt very anxious and went to my mother’s room to ask what was happening. She was also confused and did not understand what was happening. My dog ​​was the most anxious. I had to catch her around the house and calm her down as she was shaking very badly. I’ve never seen her so scared. All this time there were explosions with different periodicity. After we talked for some time with my mother, the loudest explosion occurred. It was a kilometer away from us, and since there was a military base there, we realized and decided at that moment that these were not exercises. The worst thing is that there were no men in the house. It was me, my mom, grandmother, and a dog.”

Holubtsova and her family stayed home for a while with the hopes that it would end soon. However, it only grew worse each day. Eventually they were forced to pack and leave as the explosions grew closer and closer.

“We left the next morning in our car,” she recalled. “We had to get out of Ukraine before the curfew. It was very difficult to cross the border because we saw how men say goodbye to their families. It was also a heart-breaking sight when women with children crossed the border on foot. We passed them with tears in our eyes. After we crossed the border, we made a stop in Moldova and spent the night in a monastery where we were very warmly received. The next morning we continued our journey to Germany. We drove there almost non-stop and it took us two days which exhausted us greatly.”

Bielobrov’s mother and two sisters took refuge in Sweden, while his father returned to Kyiv. Most of his other extended family is still in Ukraine. Holubtsova’s family safely relocated to Germany after applying for help, but one of her grandmothers is still in Kyiv in a nursing home.

“Today I cannot live my life like I did before the war,” he said. “Everything became indefinite. I just don’t know what will happen tomorrow. Myself and my family cannot set goals and life plans.”

Holubtsova agreed, adding, “This has had a very strong impact on my family morally. It is very difficult to be in a country other than your own, not in your comfortable home. Every day is a mystery to us. I have also become very afraid and sensitive to loud noises.”

The team trained in Oberstdorf for a couple months while they prepare their new programs with their main coach, Maria Tumanovska-Chaika. They were able to get a lot of help with the accommodations and ice time and are thankful this for this.

Last season, the two-time national silver medalists had a pretty good season. They finished fourth in their Challenger Series (CS) debut at 2021 Budapest Trophy where they finished fourth. They followed up with a bronze medal at the 2021 Pavel Memorial before earning all new personal bests at their second CS event in Warsaw. Then they debuted at the 2022 European Figure Skating Championships in Tallinn, Estonia.

Bielobrov agreed, adding: “The European Championship debut was the highlight of our season. We have never competed at such a high level competition. We skated the best as we could at the time and we were very happy when we came back home. ”

On July 2, the ice dancers relocated to the Ice Academy of Montreal and are currently training under Romain Haguenauer, Marie-France Dubreuil, Patrice Lauzon, and Pascal Denis until the end of the summer.

“This was our long-standing dream in the execution of which we did not believe,” said Holubtsova. “I remember how half a year ago I sat at night and watched the TV series ‘On Edge’. I then cried at the thought that we would probably never be able to experience what it is like to train in the best team in the world.”

While competing at the 2022 European Championships, Pascal Denis had invited the team to Montreal for a skating camp.

“We were very excited when we heard it!” recalled Holubtsova. “We understood that it probably wouldn’t happen because we didn’t have enough money, but the invitation meant a lot for us. After the war started, we were looking for a place to skate and we immediately thought about the invitation we had received in Tallinn.”

Holubtsova and Bielobrov had already begun their GoFundMe page at the time and were able to go to Montreal with these funds. Afterwards, they discussed their budget with the IAM (Ice Academy of Montreal) team and the ice dancers received a discount so they could stay for two months.

“I can hardly describe my first days here!” said Holubtsova. “I was overwhelmed with emotions. Next to the coaches, I smiled all the time with happiness, I just couldn’t help myself.”

Bielobrov added that Samuel Chouinard, Adrian Diaz, and other coaches also helped them on the ice.

“We are very thankful to everyone who contributed,” he said. “Without them, our dream of skating in Montreal would never have been possible.”

Now the team is currently working on their new dances for this season. While both programs are still being worked, their Free Dance is set to “Don’t be so serious” and “Bones” by Low Roar.

“As soon as I start to immerse myself in music, memories pop up in my head about how it all started, how scared I was, but I could not show it,” Holubtsova explained. “I remember how hard it was for me to leave the house and how hard it was for us to travel. We passed a lot of road blocks with armed people, at that moment anything could happen, but we were able to leave Ukraine safe and sound. Another difficult memory is the separation from Kyryl. Those days when he wrote that they had almost no food and those days when he himself got out of Ukraine. This is all I remember when I start to skate the program.”

While the team hopes to compete internationally, funding from the federation is very limited and their parents lost their jobs due to the invasion.

“The big question is whether our federation will be able to financially support us as there is very limited funding right now,” Holubtsova summed up.