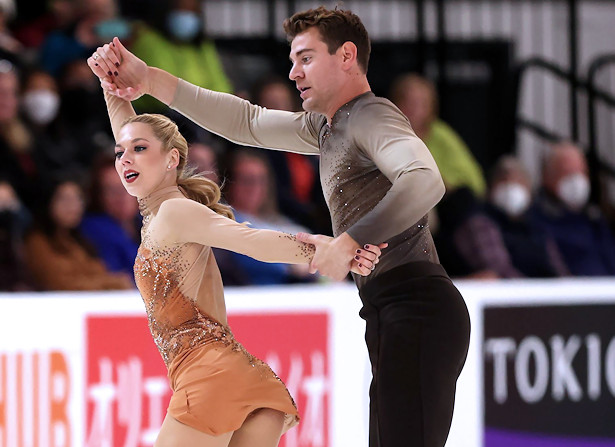 Alexa Knierim and Brandon Frazier of the United States compete in the Pairs Free Skate at 2022 Skate America in Norwood, Mass., on October 22.

USA’s Alexa Knierim and Brandon Frazier reclaimed the Pair’s title at 2022 Skate America in Norwood, Mass. on Saturday night. Deanna Stellato-Dudek and Maxime Deschamps of Canada grabbed the silver — their first medal as a team together, while teammates Kelly Ann Laurin and Loucas Ethier took the bronze in their Grand Prix debut at this event.

Knierim and Frazier placed first in the short program on Friday with 75.19 after a fairly solid short program. Performing to the “Sign of the Times” for their free skate, the 2022 World Champions produced a throw triple twist, side-by-side triple toe-double toes, and three level-four lifts. Knierim took a fall on the throw triple loop and the throw triple flip was two-footed, but the pair combination spin was graded a level four with many positive grades of execution (GOE). They scored 126.20 for first place in the free skate and 201.39 overall.

“It was a lot of fun out there this weekend!” said Frazier. “It was our first competition of the season and tonight was a fight, so a lot of grit out there tonight. I’m really proud of Alexa and us for just trusting each other and making it through that program. It’s a starting base for us. I can see this program growing for us and I’m excited to get home and get working on it. We did lose a lot of points out there, so I’m little disappointed about that.”

Frazier also commented on the new rule that was incorporated for the exit of the pair spin and feels it allows skaters to be a little more unique. “Ice dancers have beautiful pair spins. I always felt that pair spins were black-and-white and cookie-cutter looking, and I think it’s starting to open that diversification.”

Knierim countered that they were perhaps not too disappointed with the program as they knew coming in they were not in their best shape they needed to be to do their best.

“That’s ok though, and that’s part of our journey and our process,” she explained. “Coming into this competition, we were the least-prepared that we’ve been in a while. Even from last season, the first competition of the season I felt like we were a little bit more gelled and prepared. It’s a quite interesting learning curve coming in as the World champions, but coming in a little less prepared than what we are comfortable with. But you have to start somewhere and for us it was here and we’re going to continue to grow, build and work hard. I think it was a good wake-up call because Brandon and I love challenges.”

Stellato-Dudek and Deschamps earned new personal bests for both their programs in their second season as a team. Their “Cleopatra” free skate featured a strong level-three triple twist and level-four Axel lift, as well as a throw triple flip, throw triple loop, and side-by-side triple toe-double toes. The 2022 Nebelhorn Trophy Champions, who stood in second after the short (73.05), scored 124.84 points in the free skate and placed second overall with 197.89 points.

Stellato-Dudek agreed with Frazier’s assessment of the pair spin: “We have a dance lift that we do to start our pair spin. It’s funny because some of the pairs who have retired will write me not to say, ‘Good Job’, but to say ‘I like your pair spin’ which I think is hilarious because it’s not the element that usually gets comments. Anything that allows more creativity is a plus in my opinion.”

The Canadian team has been using the forward-outside death spiral in their free skate (versus the less riskier version of the back-outside position) for a few seasons. Stellato-Dudek herself said that she is surprised she can do it at all.

“I’m in shock when I do that death spiral,” said Stellato-Dudek. “During the lockdown, we had been thinking about doing the throw (triple) Lutz, but decided against it and wondered, ‘what could we do instead outside on the small frozen ponds that could up our points?'” The team worked on the forward-outside death spiral every day until their hands went numb. “So that’s kind of how that was born. It was, ‘what could we do with what we were being given?’ which was not a lot.”

When asked how the 39-year-old was able to stay fit, she responded: “I think that there is no age limit on passion. I love to go to the rink every day and I love the daily grind. I love training. I love the challenge of competition. What comes along with that when you are older is that it’s your choice to do it. It’s not your parents making you, it’s not your parents paying, it’s your choice to do everything that goes along with being an athlete.”

“So, in addition to training at the rink, I’m always the first one there,” continued Stellato-Dudek. I take the longest to warm up on purpose to get my body going so that I can limit any potential injury. I do just as much cool-down. That’s not an option for me, that has to be done if I want to be in the best possible shape and show up for my partner and continue to progress. So to me, it’s not a special diet or anything like that, it’s more of commitment and passion. Part of my job is to stay a certain size for my safety, for my partner’s safety and to have strength to be able to pull up a throw.”

“I wish I could say it was easy because of something like, ‘I stopped eating cupcakes,'” she laughed, “but it’s a lot more than that! It’s more about the commitment and five hours of daily exercise and three house of cool-down.”

Teammates Laurin and Ethier also scored all new personal bests, placing fourth (52.59) in the short and third (104.35) in the free skate. The highlight of both routines were their level-four lifts.

“We are really happy about our program here,” said Laurin. “We didn’t expect anything, so just being there and doing our thing…”

“I think this being our first Grand Prix event, being in the last warm-up group after the short was a big deal for us,” Ethier chimed in, adding that they were thrilled with being in the last warm-up group in the free skate. “The energy was great and was super-motivating for us, skating along these  guys, and the crowd and everything, that was really great energy. It was a fight, but it was the best we could do today and we’re really happy with that.”

USA’s Jason Brown asked Knierim and Frazier as they start their new chapter into the quad, what title would they use as Knierim is an avid reader.

Frazier said he would name it, ‘It’s a Sign of the Times’ to which Knierim laughed saying she would have used the same. Stellato-Dudek said she would use “I Would do Anything For Love” referencing Meatloaf. Ethier confessed he hadn’t read a book in a while, but would use “The Beginning.”