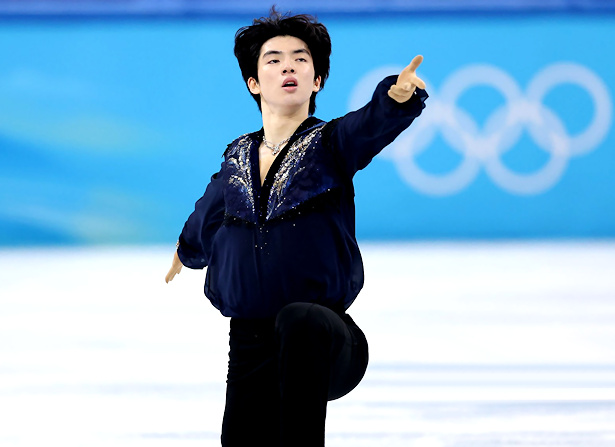 At just 20 years old, Junhwan Cha of South Korea already has two Olympic Games (2018 and 2022), a Four Continents title, a Grand Prix Final medal, and six national titles under his belt. Barring any injuries, this next Olympic cycle could prove to be just as successful, if not more so.

This month, the skater has already medaled at both of his Challenger Series events in Slovakia and Finland. He took the silver in his first outing this season at Nepela Memorial and then convincingly won the title at Finlandia Trophy the following week.

The uncommon decision for a skater to voluntarily compete in two back-to-back competitions worked for Cha, who said he needed “motivation for myself to improve as quickly as possible.”

“That’s why I wanted to take part in two Challenger competitions,” he explained. “I also wanted to be as prepared as possible for the Grand Prix. It helped me a lot to have already performed in Bratislava in front of judges and audience. Of course, I had trained well ahead of that event and was actually in good shape, but the first appearance with new programs after such a long time is always very exciting and nerve-racking. Now, one week later, I am already used to it.”

While Cha struggled with his quad Salchow at Nepela Memorial, he worked it out the following week at Finlandia Trophy.

“I am very happy with my performance in Finland,” he said. “Despite a small mistake, I got through my programs well and I think it’s a really good start to the season. I really hope to be able to improve even more as the season progresses.”

His eyes are now set on the Grand Prix series where he is scheduled to perform at Skate America this upcoming weekend (October 20-23) and at NHK Trophy in Japan (November 17-20). While the skater doesn’t have a specific goal set for the season, he just wants to “enjoy being fit” and running his programs, as well as “keep improving.”

It’s readily apparent that Cha has a very balanced and healthy attitude about his skating career as he doesn’t harbor any misgivings on the decisions he has made thus far.

“To be honest, I am quite proud on everything I have accomplished,” he shared. “Of course, there were also a few lows, bad results or injuries, but I am proud to have persevered even in these situations.”

“Both Olympic Games I participated in were great experiences for me, as an athlete and personally,” Cha continued. “I have gained a lot of self-confidence and it motivates me to keep training hard. I have also always remained true to myself when it comes to my programs. I have always chosen something that I personally liked. That’s why I’ve always had a positive attitude and have no regrets!”

Asked if he is already looking ahead to the next Olympic Games in Milan in 2026 he said, “Of course, I can already see Milan 2026 in the far distance and would love to be there, but there is still a long way to go and I will take one step at a time!”

Cha, who wanted to show another side of himself on the ice, has two new expressive and artistically advanced programs this season, both of which were choreographed by Shae-Lynn Bourne. The short is set to a medley of Michael Jackson songs, while the free skate is to music from the James Bond No Time to Die soundtrack.

“Both pieces were my own choice,” he relayed. “Since I’ve been skating in Seniors, I’ve actually always chosen rather classical music, but after Beijing, I wanted a change. I wanted to show a different side of my character and reinvent myself on the ice. I wanted something modern, with vocals. Shae-Lynn and I listened through a lot of tracks from a lot of bands, and Michael Jackson appealed to me the most. It was a challenge for me that I was eager to take on. The James Bond movie No Time to Die is one of my all-time favorite movies, so I really love my new Free Skate!”

Looking back, Cha was 12 years old when he moved away from his home county of South Korea to Toronto, Canada, where he trained with the team of Brian Orser and Tracy Wilson for many years.

“I really came to Canada at a very young age, in 2014 or 15,” he recalled. “They welcomed me very warmly from the beginning and I’ve always liked to explore other countries and cultures. When I trained in Canada, it was my home. I had great training partners and coaches there and I felt really comfortable.”

Still, his heart always stayed in South Korea as that is where his parents and all his family are and will always be his true home. In 2020, after the global pandemic hit, Cha was forced to leave Canada and return to his home country.

“Fortunately, I also have a great team there to work with,” he said. “Now I have started studying in Korea, so I will stay there for now. Unfortunately, online training with Brian Orser is very difficult because during my ice times in Korea, it’s the middle of the night in Canada. However, I still work with Brian at the competitions.”

South Korea has a many upcoming young skaters that are showing great success and results, especially on the Junior Circuit. Cha is aware of this and happy to see the young talents succeeding.

“There are so many great young talents in Korea and I am proud of how well they are doing in the Junior Grand Prix and also in Seniors,” he said. “Sometimes I train with them and it’s always great fun, so my message for them is simple: ‘Keep that positive energy, I will always cheer for you!'”

Cha is currently studying sports science, and when not studying or training, he loves to dance and practices different styles.

“I also love to watch movies!” he laughed. When asked what movie he would recommend to his fans he said, “James Bond’s No Time to Die!”

Surely his fans will happily follow his advice and will cheer him on when he takes the ice in Norwood, Mass., this Friday for his Short Program at Skate America. He will compete along side, Canada’s Wesley Chiu and Roman Sadovsky, Estonia’s Mikhail Selevko, Italy’s Daniel Grassl, Japan’s Kao Miura and Koshiro Shimada, Mexico’s Donovan Carrillo, and USA’s Liam Kapeikis, Ilia Malinin, and Eric Sjoberg.