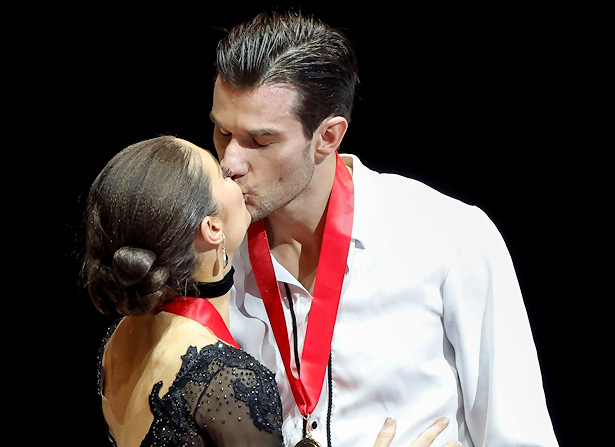 Laurence Fournier Beaudry and Nikolaj Soerensen continued the momentum of their breakout season, clinching the Canadian National Championship title on Saturday. The victory, with 212.40 points total, is a poignant milestone in their competitive journey in which the duo began competing for Canada in 2019. Their only noticeable gaff of the weekend came at the end of their Paso Doble free dance when, during the choreographed slide, Fournier Beaudry tripped and stumbled on her skirt. Highlights, however, included level-four twizzles and three level-four lifts.

“We had a really good time,” Soersensen said of the free dance. “I had so much fun that like when [the mistake] happened, I just started laughing because, like, this is ridiculous. It was really enjoyable. That was the last words [Laurence] told me right before were: ‘Nik, just remember to enjoy every moment because you know it goes by so fast when you’re out there.'”

“That’s just really expensive because it’s a fall and almost five points, probably four or five points,” Soerensen reflected on the error. “So yeah, it just is extremely expensive.

But the slip was not enough to dull the sparkle of their new gold medals.

“I consider Canada the greatest skating nation in the world,” Soerensen said. “I’m really, really proud to have been given the opportunity to skate for Canada.”

The win was also a fulfilling achievement given the absence of two-time Canadian national champions and this season’s top team in the world, Piper Gilles and Paul Poirier. Gilles recently underwent an appendectomy.

Fournier Beaudry attributes the team’s success this year to their new approach to training and competing.

“We have put a lot into the mental aspect,” she said of working with a sport psychologist. “We used to work hard physically. Really, really hard. And, now that we have obtained the skills, we know that working hard physically brought us to where we are now. If we want to continue growing up, I think the mental game is a big thing.”

Overall, coach Marie-France Dubreuil was pleased with her team’s performances in Oshawa.

“I think they skated almost everything at their top level,” she said. “Everything is improving.”

Dubreuil credits this season’s achievements to the new approach adopted to training and competing after last year’s difficult Olympic season.

“Last year, the Olympic year, was a disaster for them,” said the coach. “They had expectations, but the training was not going well. They made mistakes in every competition. It was not a fun year. They did not have fun. They put way too much pressure on themselves and did not have fun. So, when they said, ‘We think we want to do another year because we do not want to finish on a year like we skated the Olympic year,’ I said, ‘Okay but you have to do things differently, because I am not on board if it is the same as the Beijing year.’ It was way too stressful and I love them way too much as people to see them sad and mad and not having fun with this. So, they said, ‘okay, we will have a totally different approach. Much lighter.’ And that’s been in a good way. They promised they were going to make a shift and they did. They really did. They did the work and made a huge shift. It has been a pleasure and I think they are having much more fun. It shows.”

However, Dubreuil did not the matter with the skirt mishap.

“I think I’ll have to choreograph some way that she grabs the skirt so it doesn’t slip under her skate,” she promised. “Better to happen here. [Laurence] will train more with the skirt, and we will figure out a way that it won’t happen again.”

Lajoie and Lagha showed up in Oshawa ready to challenge their teammates for gold. Their soulful free dance to “Nureyev” from The White Crow featured level-four twizzles and three level-four lifts. The 2022 Canadian bronze medalists received a free dance score of 126.89 for a total competition score of 211.80. The team was unfiltered in their disappointment.

“We didn’t feel the best tonight,” said Lajoie. “It was like more a mental fight all throughout the skate and, honestly, it’s not fun to skate in those conditions, but, we did it.”

Lagha contemplated as to whether the absence of Gilles and Poirier and an opportunity to win played on their minds and effected their performance.

“We try not to focus on that, but we always dream, right?” he admitted. “Like you can think about it and everything, but of course when you go on the ice, we don’t think about it.”

The Quebecois duo were certain poised to challenge Fournier Beaudry and Soerensen after their dynamic Cha Cha rhythm dance that electrified the crowd in Oshawa, landing them just two points from the lead.

Silver medalists at #CTNats23 🇨🇦 #MarjorieLajoie and #ZacharyLagha very discouraged by their freedance which scored 126.89 and felt like a fight throughout.
Marjorie: “It’s not fun to skate in those conditions” 😞 pic.twitter.com/ueC4wQ4F5m

Marie-Jade Lauriault and Romain Le Gac’s playful free dance to music from Pink Panther amused and entertained the audience. Their routine featured two level-four lifts a level-three midline step sequence. They earned 119.06 points for the effort to finish the competition with a score of 196.40.

“We went one step at a time,” said Le Gac. “We decided to make like we do in practice: no less, no more. That way, we enjoy every moment and I think that’s what we did. It was really fun to skate here at Oshawa in the free dance. The crowd was really supportive as well.”

“Those characters are a lot of fun to play with also, even in training,” added Lauriault. “We have so much fun doing it every time.”

Bronze medalists #MarieJadeLauriault and #RomainLeGac say they savoured the Oshawa audience reaction to their Pink Panther freedance which is so “fun to skate” (Marie Jade)#CTNats23 pic.twitter.com/erLdakWsDa

Skate Canada has announced that Gilles/Poirier and Fournier Beaudry/Soerensen have been named to Team Canada for the World Championships. Both teams are also competing at the Four Continents Championships with Lajoie and Lagha.