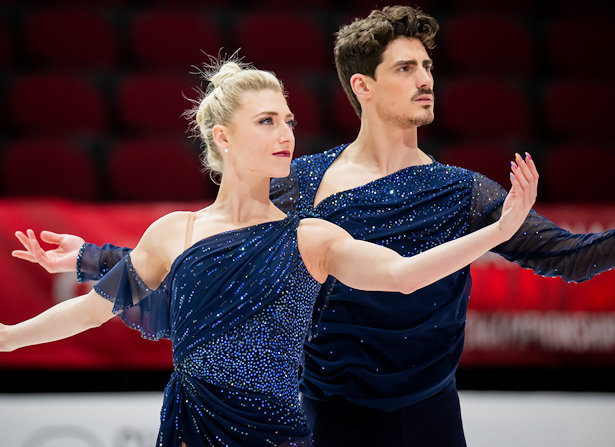 Skating to the “The Long and Winding Road,” Gilles and Poirier’s free dance unspooled element after glorious element to earn 132.26 points for a total competition score of 219.24. They were awarded a level four with six elements and received nine perfect tens in program components. Highlights included the duo’s lifts and speedy, synchronized twizzles.

“I think we are really proud of what we did out there,” said Gilles. “Again, it’s so nice to be back at Canadians and performing for a Canadian audience watching virtually again. We felt pretty strong.”

“I think this event gives us a lot of confidence,” added Poirier. “We definitely didn’t have, for either program, the skate of our lives, but that wasn’t the goal for this competition. We really want to save that for the Olympics. I think there is room for improvement in both programs.”

Changes to their free dance made the team a tad unsettled in Ottawa. “We were a little nervous and we have made so many changes since the Grand Prix series, so this was us testing the waters a little bit. So our legs are kind of like ‘remember to do this, remember to do this’ so nothing is on auto pilot yet. I am glad we had this opportunity to put this program out there.”

“A lot of the changes to the free dance are kind of the ‘in-between stuff,'” said Gilles regarding the specific tweaks. “One of the first ones is the spin, just the movement in between each position. We felt like the spin that we had was fine, but I think in order to make it plus four or plus five, which is what we are aiming for, we needed to add a little more movement and something that goes with the music.”

“And same with the transition going into our big lift is also very new,” Gilles added. “Again, we just felt like a little stuck; nothing was really moving together in that moment, so I think we wanted to make sure that something had the energy and the ‘oompf’ of the music without giving Paul and I this push-pull movement and working against each other.”

The veteran team is clear on goals for the next few weeks before the Olympic Games.

“We are going to take a few days off to rest and recover,” Poirier stated. “The Olympics is going to be a particularly hard event for us, doing hopefully both the team event and the individual event. That’s a lot of competition back to back and we are not quite used to that, so we want to make sure we are managing our energy well.”

Once rejuvenated, Poirier is determined to get back to work.

“What we are really looking forward to is just really doing a lot of repetition,” said Poirier. “So I think we are really looking forward to repeat, repeat, repeat. Dissect, dissect, dissect. And make sure everything is really sharp and really clean. The vehicles are right. It’s just a matter of skating them so we can perform at our best in the setting where it is most important.”

“It will be in tip-top shape by the time we get to the Olympics, so we are happy,” said Gilles.

Beaudry and Sorenson maintained their second place finish from the Rhythm Dance with their free dance set to the inspiring Gladiator soundtrack. The program opened with an impressive straightline-rotational combination lift spanning the length of the ice which constituted one of five level-four elements. The 2021 Skate America bronze medalists were rewarded with a free dance score of 125.61 and a total score of 206.65.

“We are just so happy to be out there and be able to skate the way we did today,” said Sorenson. “It was really liberating even though we did not have the energy from the crowd that usually really helps us in the program. We just had a lot of fun and tried to and compete as best we could.”

“We were so happy that nationals actually happened,” said Fournier Beaudry. It is such a great event and put us really into the feeling of competing at a high level. It was just a great practice for the next event to come.”

Particularly impressive was that the duo changed their free dance since the Grand Prix series.

“We made this decision about three weeks from nationals,” said Sorenson. “We see this as a journey and the other program we had meant a lot to us when it was made back in 2020. It was an idea we came up with when we were off the ice and we were trying to navigate the beginning of this pandemic. So you know, feelings change, and what we thought we needed changed during this season, so we have been playing around with this idea for a while and finally made the decision to change free dance.”

“This music really touches us,” said Fournier Beaudry. “It’s a dream I had to skate to this music. I suggested it to Nik.”

The team said the changes were made easier by incorporating many of the moves from their old free dance to this new one.

“We wanted to keep our elements from the free dance because we love it and we knew we could execute them well,” said Fournier Beaudry. “So it was how to build the music to support the material that we had.”

Rounding out the podium, Lajoie and Lagha performed their “Rio” free dance with energy and flare. They remained animated throughout the free dance, scoring 116 points, despite some admitted errors including the twizzles which Lajoie bobbled.

The 2019 World Junior Champions are still pleased with their showing in Canada’s capital city. “But, I think we still did a good job and we are really happy with the final result of course,” summed up Lajoie. “It is just a little disappointing in how we skated.”

Looking forward to their trip to the Olympic Games (team to be confirmed), Lagha listed the team’s goals: “I think that it’s just about being more consistent and have more confidence,” he said. “Everything is on point. We just need to do some repetition, like a lot of repetition. And just our bodies can kind of like turn to robots and just like go on full automatic mode. So I think that would be the goal, at least for the free dance. With the short, there are still some things to work on.”

Carolane Soucisse and Shane Firus landed in the familiar fourth position with their sultry and whimsical free dance set to music by Charles Aznavour. The 2020 national bronze medalists executed four level-four elements to earn 109.99 points in the free dance and a total competition score of 182.54.

“It was pretty good,” said Soucisse of their free dance performance. “We are really happy about what we’ve done. It went by super quick and we stayed calm the whole time and that was our goal for this week.”

In their Canadian nationals debut, Marie-Jade Lauriault and Romain Le Gac impressed the judges with their energetic free dance set to “Some Nights” and placed fifth. Formerly competing for France, the four-time French silver medalists performed four level-four elements and finished in fourth place in the free dance with a score of 110.45 for a total score of 181.74.

“It wasn’t perfect, but it was what we were hoping for,” said Lauriault. “We really lived the moment throughout the whole program, so we are just really happy and enjoying this feeling because that is what we have been working for in the past weeks, months and years.”

Haley Sales and Nikolas Wamsteeker finished in sixth place with a free dance score of 103.59 and total score of 173.59.

“I think that the training up to nationals has been one of our best training blocks so we were happy to do what we have been doing in training, so I think the training paid off today,” said Sales. “This is where we did our senior debut so it’s really fun to come back.”