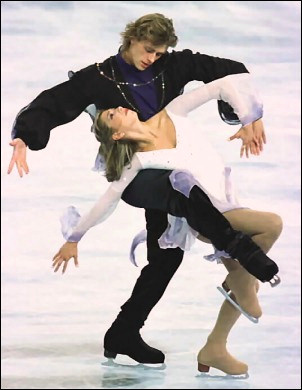 Naomi Lang and Peter Tchernyshev perform their Free Dance at the 2001 Goodwill Games.

United States ice dance champions Naomi Lang and Peter Tchernyshev took their third straight title in 2001. They won the Four Continents Championship in 2000 and finished ninth at Worlds in 2001, their third year in the top ten. Boosted by Tchernyshev’s entrance into U. S. citizenship, the skaters are setting their sights on the 2002 Olympics in Salt Lake City. They already have experience competing in the cavernous arena, taking a silver medal behind Canada’s Shae-Lynn Bourne and Victor Kraatz at the 2001 Four Continents Championships.

Lang started skating at the age of 8 after seeing the Ice Capades. A talented ballerina, it seemed like she was destined for the stage rather than the ice rink, but Naomi opted for skating as her first choice. “I think you can actually explore the music more in skating,” she said. Lang progressed rapidly, winning the novice dance title in 1993 with former partner, John Lee.

Tchernyshev’s grandfather was a four-time national champion skater in Russia in the 1940s. His parents thought skating would be good for his health and started him skating at six. Until he reached the age of 18, Peter was a real sportsman, playing basketball, tennis and soccer as well as skating freestyle. But he injured his landing ankle and the injury failed to heal properly, substantially reducing his jumping ability. For three years afterwards, he skated with the Russian All Stars on tours in England and Turkey.

“Then I decided it wasn’t satisfying, hat I wasn’t reaching my potential, so I reinstated in dance in Russia. My partner and I skated a couple of seasons and reached first in Russia in 1993 and seventh in the Soviet Union. But we had problems and when an American girl came to Russia searching for a partner, I was so frustrated that I moved to America. I skated with Sophie Eliazova for three years until we broke up in the summer of 1996. I remembered the way Naomi was skating when we competed at Nationals. So I wrote her a letter begging for a tryout in Lake Placid.” “It was a good match,” Naomi continued, “and we trained in Lake Placid with Natalia Dubova for nine months. But I missed my home and my friends in Detroit, so we moved back home and started training with Igor Shpilband and Liz Coates.” Looking for new inspiration, the couple moved to New Jersey to train with Alexander Zhulin last year. Zhulin also choreographs their programs.

Both of the dancers are very balletic. “I took a lot of ballet lessons, starting when I was eight,” Peter related. “I was pretty aggressive at it until I was 15. I found a ballet teacher near my old school to do lifts and such.” Naomi, who danced for a while with the Grand Rapids Ballet Company, started even earlier, when she was three. “I used to do ballet a lot,” she said. “I really like it and I’ve had a lot of experience with roles in the Nutcracker and other ballets.”

The dancers have worked hard to mesh their styles over the past couple of years. “Our goal was to improve our expression and our relationship on the ice, but stay within the boundaries,” Naomi noted. The dancers are among the few who approve of the new rules for ice dancing. “I like the new rules actually,” Naomi stated. “It’s better for the technical mark. It works out for the best because we can show our skills and we do some interesting spins.” Peter added that “the judges can be more objective in the first mark.”

For 2002, the dancers hope to keep moving up, make it into the top five at Worlds, and reach the top for the 2002 Olympics. “We’d like to tour,” Peter added. “It would be a lot of fun performing before so many people and we could learn so much from some of the other dancers.” Peter plans to coach after he finishes his career. He teaches dance and freestyle all day at the rink now when they aren’t practicing, while Naomi teaches the basic skills program. Finding ways to accompany their students to competitions while keeping up their own schedule is a major scheduling problem. Naomi started college, but took off to concentrate on skating. She plans to return when her career winds down, perhaps studying for a career as a veterinarian. “I have many cats, five or six,” she said.

When they have time off, they watch television of go to the movies. Naomi also likes shopping and going to the beach. She doesn’t play other sports: “I never had the time to learn, between skating and ballet. I wasn’t even a cheerleader.” She listens to pop and alternative music and enjoys everything but heavy metal and Marilyn Manson. Since Celine Dion is her favorite singer, Naomi has seen “Titanic” three times. Peter prefers listening to classical music and says he has a lot of CDs, but likes to collect “medals and checks.” She doesn’t have a lot of stuffed animals. “I have one good luck thing that we got from a fan, but we can’t decide if it’s a bear or a dog,” she laughed. They don’t travel much outside of competitions but listed their trip to St. Petersburg as a special treat. Naomi exclaimed that “It was a once in a lifetime visit, seeing all the museums and palaces. The Hermitage was amazing and we spent hours just walking through it.”