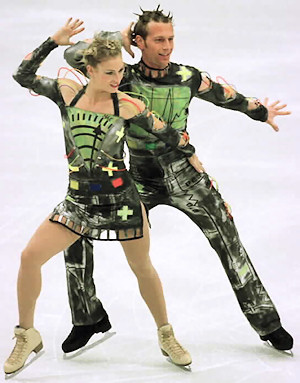 German ice dancers Kati Winkler and Rene Lohse, five times the German champions, plan to continue for at least another season or two. “We want to forget last season,” Lohse said. “We have nothing to lose so we want to compete and be as good as possible.” Winkler added, “We still skate for the crowd so we’re happy we can still compete. We’re taking it year by year and we’ll see how this year goes, but we definitely plan to compete at Worlds in Dortmund in 2004. We’re still having so much fun when we skate. We just hope to make the last group and go for a medal.” The dancers have done well at Europeans, although they have not yet reached the podium, finishing as high as fifth in 2003. They were 19th in their first World Championships in 1995, moving up to sixth in 2000.

But they accomplished one of their career goals in 1998 when they skated at the Olympics in Nagano, finishing tenth, and competed again in Salt Lake City, where they finished eighth even though Lohse had a severe knee injury in the fall that kept them from competing for most of the season. “I fell in competition practice in Gelsenkirchen and injured the meniscus and ligaments,” he said. “I had to take two months off from training after surgery, then had to use a brace. I wasn’t fully recovered until Worlds and there is still some weakness in the knee, but we work around it.” “It was amazing to be at the Olympics,” Winkler added. “It must have been in our stars to be there.”

Bad luck hit Lohse again last summer while he was riding his bike in the small alpine village of Oberstdorf. “A pickup truck pulled right out in front of me in the village,” he related. “The bike hit the truck and I went over the handlebars and fell on my shoulder. The bone was sticking up straight through my shoulder where I cut three ligaments. The pain was much worse than when I hurt my knee. I had to have surgery and couldn’t use my shoulder for eight weeks. I could skate but we couldn’t do anything using the upper body.”

Lohse recovered in time for the Germans to compete in the Grand Prix, finishing third in Germany and second in Japan, but health problems kept them out of the Grand Prix Final. “First I had influenza, then Rene could not skate because of a muscle injury in the leg,” Winkler lamented. “Somehow we are really unlucky in the moment.” But the dancers have enjoyed the events in the Grand Prix series. “They are really hard competitions. We can see our mistakes and we have learned a lot,” Lohse said.

Neither Winkler nor Lohse has ever danced on ice with anyone else. Winkler, who is from Chemnitz and Lohse, from East Berlin, were both selected in kindergarten as “having the right temperament for skating,” Winkler said. “To be chosen in kindergarten was the way to find new talents in sports in East Germany.” Both began skating when they were 4, although no one else in their families skate. Lohse gave up skating for other sports for two years at age 12, but soon returned.

He began again as an ice dancer when Winkler asked him to be her partner when they were both 14. She had met Lohse at singles events and then was enrolled at the same school when she moved to Berlin at age 10. Although Winkler enjoyed skating singles, a bad back hampered her jumping ability so she turned to dance. It’s a perfect match for the two tall blondes. Winkler calls Lohse “my best friend. I can tell him anything. He is always pushing me forward.” Lohse reciprocates: “She is very confident, a very competitive skater who is better in competition than in practice. She is very easy to skate with, especially since she is so pretty.” When they began competing in 1988, Lohse noted that “It was a hard time because for 18 years there was no ice dancing in East Germany and we were the first who started it again.”

The couple train in Oberstdorf with Martin Skotnicky. Their choreography is by Kelly Johnson, Marc Bogaerts, and Werner Lipowsky. In addition to spending four to five hours a day on ice, they do conditioning classes twice a week and ballet on the weekends. In the summer, they increase their training to six hours on ice and often attend special training and conditioning camps. This year they spent a week in the Azores at a special camp.

Among their role models are the Finnish dancers Susanna Rahkomo and Petri Kokko so it’s no surprise that the German dancers have developed their own unusual style. In 2000, they skated to “Millenium” in costumes with clocks on the front, doing movements that imitated a clock’s ticking pendulum. In 2001, they used black spirituals including “Swing Low, Sweet Chariot” to portray slaves gaining their freedom. In their original dance, Winkler dressed as a showgirl, complete with black fishnet stockings, as they danced to “Cabaret”.

This season, they are using a polka, a waltz and a march by Paul Linke for the original dance and “Crazy Benny”, “Private Investigations” and “Played-A-Live” for the free dance. “The idea for the original dance came from our coach,” Lohse stated. “He was listening to old records and found an operetta that comes from Berlin so he said why not use it.” “It’s grand ballroom, but different from Strauss,” Winkler added. “It’s more fun, but still elegant, like an evening at the operetta.” “For the free dance, we wanted modern music,” Lohse continued. “The theme is energy, like the positive and negative energy from a battery. We used electric guitar, drums and stuff to create special sounds.”

Both of the skaters enjoy dancing off ice. Winkler especially likes disco dancing although she “likes every type of dancing.” They both enjoy bringing ballroom dances to the ice. Waltzes are their favorite compulsories, although both also enjoy the Yankee Polka. Winkler notes “We are more the type for waltzes. Our skating is too soft for the paso, which is very difficult for us. We don’t have the right look for the paso.” On the other hand, she said that they “very much like Latin music.” Off ice, they both listen to rock music.

To fund their training, both skaters are sergeants in the German Army’s sports division, although Lohse outranks Winkler, having been involved for seven years to her six. They represent the Army at public appearances as well as participating in training exercises several times a year. Lohse added that they sometimes have to do night watches.

After they finish skating, both skaters plan to work in business. Winkler completed a management training/apprenticeship program at Mercedes Benz, working in different areas of the company at different times. She plans to study international business at the university as she speaks several languages including English, a little bit of French, and Russian as well as German. Lohse is a graduate of Humboldt University in Berlin, where he studied physical education. He is continuing distance-learning classes in sport and tourist management with an eye to managing a recreation or sports center.

Off ice, each of the skaters likes to relax with their friends. Winkler often travels to Munich to be with her boyfriend. “We love to go to the cinema,” she said. “We see everything that comes out.” Lohse is more of a science fiction fan. “I like it when it’s realistic but not stupid,” he said. He loves to play tennis and is a member of a tennis club, where he plays on an over 30 team, while she likes to swim and do aerobics in the sports center. “I like that a lot more than jogging,” she said. Both enjoy sunny and warm climates for holidays. Said Winkler, “My favorite is Italy. Because of the Wall, we couldn’t go out. That’s why I hadn’t seen too many nice places until I started skating. I’d like to go to Australia someday.”

Both use their computers a lot. “I’m on it every day checking emails and results,” Lohse said. “I don’t play any games but I do some web surfing.”