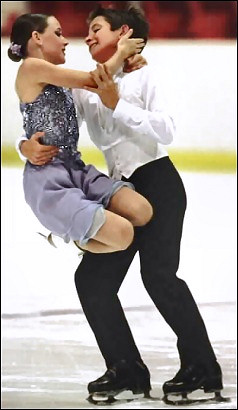 One of the few ice dance teams to receive a standing ovation at the Canadian Nationals in Saskatoon last January was a junior dance couple, Tessa Virtue and Scott Moir.

One of the few ice dance teams to receive a standing ovation at the Canadian Nationals in Saskatoon last January was a junior dance couple, Tessa Virtue and Scott Moir. Their lively mambo free dance was a real crowd pleaser. The ice dancers finished seventh at Canadians this year in juniors after taking third last season in novice and first in 2001 in pre-novice. They won the Lake Placid Novice International Dance Competition and finished eighth at the North American Challenge Skate in Huntsville, Alabama the next month in their first junior event. Now their goals are to get a Grand Prix assignment and to compete at the senior level for Canada one day. They don’t have a definite timetable for the future, with Moir noting, “We take each year as it comes.”

Skating is a family tradition for the Moirs. “Everyone in my family skated,” he said. “My mother is a figure skating coach, my dad played hockey and coached and my two older brothers skated. I started skating at three, got my first dance partner at age eight and started skating with Tessa at nine.” Virtue had a slightly different reason when she started at the age of six. “I didn’t want to be the only one in my class who couldn’t skate when we went on a school field trip to the arena,” she said.

Virtue began dancing with Moir when she was seven. “I am still trying to do singles, but once I got a dance partner, things just kind of clicked,” she said. She competed in singles last year and finished second at the All Ontario Championships. She almost has her double Axel and is working on triple jumps. Both skaters decided to try dance due to the influence of Moir’s brother, Danny, a senior ice dancer. The two teamed up when Moir’s aunt, Carol Moir, who coached both of the skaters for singles, decided they would make good dance partners.

The dancers train in Kitchener-Waterloo with Paul MacIntosh, Suzanne Killing and Rebecca Babb. They train for three hours on ice Monday through Friday before school and two hours off ice after school Monday to Thursday. That includes conditioning, aerobics, weight training, and balletics, although they each have approach the barre differently. Moir, who also plays hockey, was adamant that he takes ballet “only for skating purposes,” while Virtue, who has had classes since she was three, said, “One of the highlights of my life was the summer I spent at the National Ballet School when I was nine.”

Killing also choreographs the couple’s dances. Moir’s favorite compulsory dances are the Blues and the Golden Waltz, while Virtue likes the Paso and the Samba. He listed the Rocker Foxtrot as his hardest compulsory so far while she thought the Rhumba was the hardest. This season they skated to “Les Poissons” and “Concerto Sopra Motivi dell’Opera” for the original dance and “Malaguena,” “Eres Todo En Mi,” and “Tres Deseos” for their free dance. “I like to skate to anything interesting and fun,” Moir said, while Virtue noted that she liked “something lively, dancy and fun.” Off ice, Moir listens to the top 40 while Virtue listens to almost anything. She also plays the piano.

For fun, Moir likes to hang out with friends and plays sports. “I try to play as many sports as I can,” he said. He plays forward on a house league hockey team. Virtue likes to dance, spend time with friends, and shop. “I study ballet and modern dance,” she said. Moir likes to read action books and watch action movies, while Virtue likes mystery and comedy books and almost any kind of movies. Both are dog lovers. He has a dog named Diamond, while she has two dogs, Keeta, a Shepherd Cross and Maddie, a Rhodesian Ridgeback. She also lives with a family in Kitchener-Waterloo with a dog named Duffy. Both skaters keep the stuffed animals that are thrown on the ice.

For holidays, Moir enjoys going to a lakeside cottage in Muskokas, north of Toronto and enjoy time off at his family’s home. Virtue said, “My family often tries to add in a few days of vacation time around a skating event or competition.” She has enjoyed traveling to Chicago, Lake Placid and Vienna and hopes to go to Paris, Italy and Spain one day, while Moir wants to see Hawaii and South Carolina.

Both of the skaters are attending Bluevale High School, where Moir is in tenth grade and Virtue in ninth. The dancers have not decided on a post-skating career although Moir listed airlift paramedic and Toronto Maple Leafs trainer as possible careers, while Virtue has thought of being a lawyer or a teacher.

Moir said that he most enjoyed skating because of “the experiences, performing and the people you meet.” Virtue said she’s enjoyed “friends I’ve made, performing in front of a crowd and the dresses!”