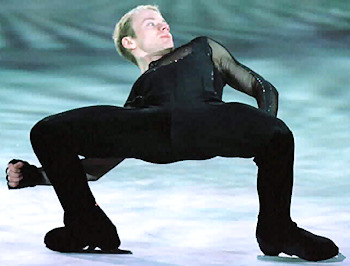 Although names like Goebel, Plushenko, Stojko, and Yagudin come to mind when skating fans think of quadruple jumps, it was Russia’s Ilia Klimkin who was the first skater to land two different quadruple jumps in the same program. He accomplished the feat when he landed both a quad salchow and a quad toe lop in his long program at the Nebelhorn Trophy in 1999. That was the same year Klimkin won the World Junior Figure Skating Championships.

Since then, Klimkin has moved steadily upwards in Russia, gaining one place each year, from fifth in 2000 to second this season. He finished sixth at the 2002 European Championships in 2002 and fourth in 2003. He also qualified for the Grand Prix Final in St. Petersburg this season, his first appearance at the event, where he finished second. He later finished 9th at Worlds. “My goal was to make it to Europeans and Worlds,” he said. “To make the Grand Prix Final is brilliant.” His success is especially notable since he injured his landing leg during the summer when the top of a new boot cut into his calf. The injury became infected, requiring three surgeries before it healed, keeping him off ice until late September. He still managed to win the NHK Trophy two months later.

Klimkin didn’t volunteer to be a figure skater. His grandmother took him for skating because she thought it would be good for his health, even though his there weren’t any other skaters in his family. “I began skating when I was four,” he said, “But it was ten years before I started to like it. I don’t know why, but I didn’t have any fun skating. When I was 15 or 16, I came into the harder elements and started skating well, so I came to like it. Now I plan to skate until I get tired of it, then it’s over.” He plans to compete until at least the 2006 Olympics.

Unlike many skaters who change coaches, Klimkin has remained with coach Igor Rusakov for 13 years. “He does everything for me,” Klimkin said. “Music, choreography, costumes, everything.” He trains for about three hours a day, six hours a day and takes ballet three or four times week as well as the usual weight training and conditioning classes. The ballet training helps account for the superb positions that Klimkin attains on the ice, especially in his camel spins and spirals.

Although he’s a great jumper, Klimkin said that he enjoys the skating more than the jumping. “Skating is more than the jumps,” he said. “I enjoy the exhibition programs more than the competitions because you are not nervous and you can show everything. Competitions are too serious. It’s too important to land all the jumps and skate clean. Shows are just shows. That’s why people come to see skating, when it’s relaxed and beautiful.” He includes a variety of unusual spins, spirals and even a cantilever in his programs.

As for the jumps, Klimkin remembered that he landed his first triple, a flip, at the age of nine and his first quad toe loop when he was 16. “It only took me a couple of more months to get the quad salchow,” he said. “I used to like the toe loop best, then it was the salchow. Every month I like a different jump.” He is using a quad toe/triple toe combination in both programs, plus a quad salchow in the long. He is also practicing a quad flip, but has not yet landed the jump.

Klimkin prefers to skate to slow romantic music, but said, “each season we change both programs to try something different from the last season so it will not be boring.” He is using “The X-Files” for his short, “Sunny Boy” by Rene Aubry for the long, and “Notre Dame” for the exhibition. “I didn’t like the short program music at all at the start,” he said, “but now I like it OK.” He will also have a new program for the Grand Prix Final. Irina Kolganova works with Rusakov on choreographing the programs. Off ice, Klimkin listens to pop music including Pink and Eminem and Russian music, but he dislikes heavy metal.

Off ice, his main interests are soccer, reading, and computers. “I play soccer as often as I can,” he said, “but the coaches don’t want me to get injured.” Sometimes he plays basketball and tennis in the summer. His reading interests are always changing, from fantasy one month, to science fiction the next month, then something else. He’s a heavy computer user, using the Internet to research information and playing games, especially economic games in which players build a business. He said there were six or seven fan pages that he has seen and he sends them photos and information. As for the toys he receives, Klimkin said, “I have enough in my room. I give the extra ones to my sisters, nephews, and friends.”

Klimkin is in his final year of studies at the Institute for Physical Culture and expects to graduate this summer. He hasn’t planned what to do after he finishes skating, but has considered both coaching and business.