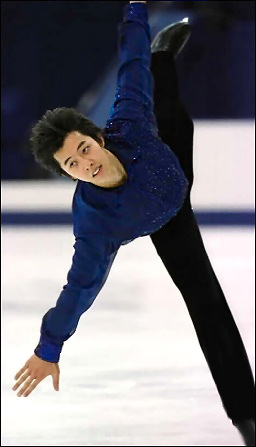 Hugh Yik, a tall 21-year-old from Dalhousie, New Brunswick, is poised to make a mark in the senior men's category in Canada.

Hugh Yik, a tall 21-year-old from Dalhousie, New Brunswick, is poised to make a mark in the senior men’s category in Canada. Yik, whose goal is to make it to the Olympics and Worlds, Yik won the Canadian novice and junior men’s titles in consecutive years, 1997 and 1998, the first time in 20 years the feat had been accomplished. He finished seventh at Canadian Nationals this season. “I take every season one by one and assess my chances placement wise,” Yik noted. “I know if I skate to my potential, I can do well internationally.”

Yik began skating when he was six. “I was trying to learn how to skate for hockey,” he said. “My sister Tammy was in skating at the time, and one day I decided to try it too. I used to play hockey until the age of 13, and now its just skating. I played defense because I could skate better backwards then most younger guys.” His sister finished as high as fifth at Canadians in junior ladies before going to college.

Yik first landed a triple jump when he was 12, a triple salchow. Now he’s working on quads. “I’m working on several at the moment,” he explained. “I will narrow down which ones I will focus on for next year during the off season.” The Axel is Yik’s favorite jump. “On a good day,” he specified. “It has such a different feel to it then the other jumps.” His most difficult combination is currently triple Axel/triple toe, which he uses in both the short and the long. He has also used triple flip/triple toe, triple lutz/triple toe, and triple salchow/triple loop in his free skating programs. “I plan to add a lot more difficulty to the program from jumps to field moves for next season,” Yik added. “Hugh is a great jumper,” said Michelle Leigh. “He has the best use of his knees to give him the greatest spring I’ve seen.”

Yik said that on average, he practices for two to three hours on ice and two hours off ice daily. He currently trains at the Mariposa Club in Barrie, Ontario, Canada where he first trained in the summer of 1996. He moved to Barrie in the fall of 2001 to train full time with Robert Tebby and Doug Leigh. His earlier coaches were Emery Leger, Monique Le Blanc and Deanette Turner.

Michelle Leigh and Kelly Johnson do the choreography for Yik’s programs. “Past programs have been open for suggestions from everyone who works with me,” he said, “but they are mainly done by the choreographer.” As for the music, Yik said, “I take suggestions from people and listen to CD’s or music I’ve heard in the past that really caught my attention. I’ve skated to music ranging from classical to traditional dances, to soundtracks. I’m always up for new things if I think it is within my abilities to portray.” For last season, Yik used “Czardas,” a Hungarian dance for his short program and music from “The Rocketeer” soundtrack for the long.

Off ice, Yik said, “I prefer rock music, but generally I’m pretty open-minded when it comes to music. I enjoy a wide variety. Bands I most commonly listen to are Everclear, Radiohead, Counting Crows and the Goo-Goo Dolls. I also play the guitar.”

To relax, he said he enjoys all kinds of movies, “with the exception of movie types such as “Scream”. I read magazines and some knowledge books from time to time. I’m also interested in automotives.” In the summer, he goes cycling or to the beach.

“I use my computer on a daily basis,” Yik said. “Mainly for communicating with friends and keeping in touch with Wendy (the webmistress of Yik’s official site at www.hughyik.ca.tc). My sister is away at school and I keep in touch with her as well. I’m also interested in web page construction.” Yik takes an active part in his web page, posting notes on his competitions.

“I enjoy going places once I’m there, but I’m not a big fan of the actual traveling especially if it is long,” Yik said. “My favorite trip so far was Vienna. It was my first international competition after I had been injured so I was very focused on my task. Hopefully I will get another opportunity to visit there. It was a very nice city, and I skated a pretty good performance over all. I’ve never been to the Asian side of the world yet or a full tour of Europe. I’ve only seen bits and pieces of Europe.”

Yik hasn’t thought of a career after skating. “I was taking part-time classes at Georgian College prior to Nationals,” he said. “I possibly will go into full time post secondary school after I finish skating competitively. I enjoy helping other skaters. I have thought about coaching but no definite decisions as of now.”