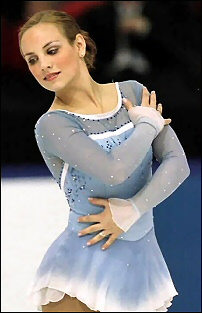 Canada’s Meagan Duhamel upset 2004 world junior silver medallist Kimberly Meissner of the United States to win the ladies event at the season’s first Junior Grand Prix in Courchevel, France in August. “My win in Courchevel was a total surprise,” Duhamel exclaimed. “I had been training really well but I never expected first place. Both of my skates were clean.

My long has six triples so I thought maybe if I skated that well I might be able to come third at the best, not first.” Even more remarkable was the fact that Duhamel wasn’t able to fully practice in Courchevel because her luggage with her skates arrived only the night before the short program.

Duhamel didn’t attempt a triple/triple combination in either program. For the short, she used a triple lutz/double toe combination. In her long, she landed a triple flip/double toe and a triple salchow/double toe that was planned as a triple salchow/double loop. “I don’t have any triple/triples in my programs because I have been focusing more on my program components but I have been completing triple salchow/triple loop in practice and by Canadian Nationals I hope I have it in my long program,” she explained. “The triple loop is my favorite jump. I do running three turns into it and it feels like I’m flying. If I ever work on a quad, it will be a quad loop. I’d like to do one someday.”

JGP Courchevel was Duhamel’s first experience with the Code of Points judging system that will be implemented at Canadians this year. “I went to France knowing nothing about the CoP,” she said. “I could have gotten a score of 10 and thought that was good because I had no clue what to expect. Now, after experiencing it, I really like it. It gives you credit for what you do, not who you are. That is the best part.” Duhamel was so surprised by her win that she didn’t even have an exhibition program ready. “I made something up to Mariah Carey’s Hero,” she added.

Although Duhamel won the 2003 junior ladies title in Canada, she had not had much success since then. The lively brunette from Lively, Ontario placed tenth in seniors at Canadians last season but only sixth in her only international last season at Skate Slovakia. But she had narrowly missed the podium at Courchevel in 2002, finishing fourth.

Not only is Duhamel competing in ladies, she also teamed up with former Canadian junior pairs champion Ryan Arnold to compete in pairs, starting with the JGP in Belgrade. “I started pairs with Ryan at the beginning of the summer,” she related. “It started out more for fun but we are now skating seriously together and competing this season on the Junior Grand Prix circuit. I started because I have always wanted to do pairs but I never got an opportunity since I turned it down when I was twelve. I did not want to regret it again so I jumped at the chance.”

Lee Barkell coaches Duhamel in both singles and pairs at the Mariposa School of Skating in Barrie, Ontario, where she has trained for the last four years. Former Olympians Jacinthe Lariviere and Lenny Faustino also help with her pairs training. “It’s been a long summer training both because I had to put a lot of focus to pairs because I had so much to learn in so short of time,” Duhamel stated. “I did about two hours on ice of pairs and two hours of singles plus off ice lifts and dance class for pairs and off-ice work out on my own. In total about seven hours daily Monday-Friday was spent with skating things.”

Kelly Johnson choreographs both her singles and pairs programs. She is using Passacaglia by Rolf Loevland from The Secret Garden for her short program, the same music she used last season. In her new long program, she is skating to Introduction et Rondo Capricioso by Camille Saint-Saens.” “I really like this music for my long,” Duhamel said. “Kelly picked it for me and I fell in love with it.” In pairs, she and Arnold are using Adagio by Albinoni for the short and Concerto de Aranjuez by Rodrigo and Leyenda by Albeniz played by Vanessa Mae for the long.

Duhamel started skating when she was three. “My sister was a skater and I followed her around,” she stated. “but I could only take CanSkate classes because Heather was taking private lessons and my parents said I didn’t need any. I was ten before I convinced them to let me have private lessons.”

Off ice, the 18-year-old listens to all kinds of music except rap. She also likes to dance and takes some jazz and modern dance classes. She also likes to hang out with her friends from Mariposa. “All the skaters are like family,” she said. “We’re really close friends and like to do things together like going to the movies. I like anything new an exciting, but I like comedies the best.” She also uses a computer to talk to her friends. From her competitions, she said, “I keep all my credentials and stuff I get at events and all my stuffed animals at home in my room. I like the really colorful ones.” Her pet cat also stays home with her family while she lives with a host family in Barrie.

Duhamel graduated from Innisdale High School this past June. She plans on going to university to become a schoolteacher, perhaps in English, her favorite subject outside of physical education. “I enjoy creative writing,” she continued. “I liked writing stories when I was younger.” For now, she’s concentrating on getting to the Olympics. “I’ll definitely try for 2006, then we’ll see,” she said. “I don’t plan to stop skating until I quit enjoying it.”