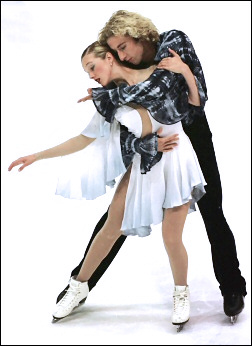 Canada’s Allie Hann-McCurdy (17) and Michael Coreno (19) have set their goals high, striving to become Canada’s next junior dance champions. The dancers finished seventh at the 2004 Canadians in Edmonton. “This season Mike and I want to be Junior Dance Champions and we want to represent Canada at Junior Worlds,” Hann-McCurdy said. The couple started the season by placing third in the junior free dance and second in the junior original dance at the Lake Placid Ice Dance Championships. The couple also easily won the junior dance event at the North American Challenge Skate in San Jose, CA, taking firsts in all phases of the event. They next headed to Budapest, Hungary taking the silver medal at the Junior Grand Prix event there.

“As for our competitive career, we would like to represent Canada at World and Olympic championships, and we want to be remembered as a unique, energetic, and exciting team,” Hann-McCurdy continued.

Hann-McCurdy began skating when she was eight. “No one else in my family ever skated,” she said, “but I have a home video from when I was five and I just claimed I wanted to be a figure skater. At that point I’d never skated before. It looked like a lot of fun, and when I started, I just wanted to keep going.”

She tried other activities although none of them caught her fancy. “My mom used to put us into swimming lessons and baseball to keep us busy in the summer,” she said, “which I was terrible at. I won tennis lessons from school once. I used to sing in a choir and I took singing lessons for a while, which I really enjoyed, but I stopped at about ten. I took piano lessons for about a month, but I didn’t have the patience to teach myself the theory, I just wanted to start playing songs right away. I used to play volleyball, until grade seven when they kindly made me their team manager as a way of sneakily letting me off the team. I was not the star player there to say the least. I always used to do cross country running and track and field, and I did fairly well with it, I made it to regionals once.”

She competed in singles until she was twelve, when she started ice dancing. “I always loved practicing footwork on my free skate sessions,” she said, “and I loved being expressive in my programs, and I was the weird kid who liked practicing stroking.”

Coreno started figure skating when he was seven. “My dad used to play hockey,” he said. “I was learning how to skate for hockey, and after a year the coaches at the rink thought I should try figure skating. The jumps and spins came to me naturally so I decided to keep going.”

He tried everything in skating, before deciding to concentrate on dance. “I have all of my golds,” he stated, “dance, free skate, artistic, and skills. I’ve also done pre-novice pairs. I competed in novice men. I was about to go junior when I realized dance was the way to go.” He started dancing when he was ten. “I don’t compete in singles anymore, but you can still see me on the odd occasion try a few jumps. The best part about dancing is that there is someone else with you during training and competing.”

He was also active in several other sports. “I used to play a lot of basketball, but track was my favorite in school,” Coreno stated. “I was on the school track team for most of elementary school and high school. I ran the 100 meters, 110-meter hurdles, and 100-meter relay. My Dad is a golf pro, so I learned to play at a young age. My parents also put me into baseball, but only for a few summers.”

Hann-McCurdy and Coreno began skating together in May 2003. “I was training in Kitchener with a former partner, as was Michael,” she said. “Both of us broke up with our other partners, and had a few tryouts with other people. Then we tried out together, we liked the combination. We’re both dedicated and expressive speed-demons. So we decided to become a team.”

“When you stand back and watch Allie it amazes you how dedicated she is,” Coreno stated. “As a training partner I love the way she can focus and always works towards her goals. She has a great sense of technique and how to perform. When we were first trying out I noticed the effortless speed we would get. Then throughout our first year together I realized just how dedicated she was. She never steps on the ice not wanting to be there. We have a great skating relationship where we can help each other out. No one is afraid to point out things or voice opinions. I think we get along well together because we both love to skate and we share many of the same goals. Allie is a wonderful person and a great best friend. She’s always smiling and having fun. I’m happy we skate together because no matter how hard the training seems we can still laugh about something.”

The dancers have trained with David Islam, Kelly Johnson and Pavol Porac at the Mariposa School of Skating since September 2003. They train on the ice for about three hours, and then work out at the gym five days per week directed by Dylan Harries, their trainer from Ottawa. They also do some yoga, Pilates, and ballet once a week.

Music selection is a group effort. “We listen for hours on end, and Michael and I separately find things we like, and then Kelly finds things she thinks will suit us,” Hann-McCurdy said. “This year she found a piece that she sold us on. We don’t usually choose by genre, we just find a piece we like, although we usually enjoy skating to fast music.”

Their free dance, choreographed by Johnson, Porac and Islam with influence from the German ice dance champion Rene Lohse, is to selections from Beethoven’s Last Night, while Igor Shpilband did their original dance, which will include a foxtrot, quickstep and Charleston. “Michael and I have some creative ideas that Kelly lets us incorporate on occasion,” Hann-McCurdy said. “What usually happens is that we will have the music on and we will experiment and if Kelly, Pavol or David see something they like or something that seems natural, they will include it.”

Off ice, Hann-McCurdy listens to alternative rock, classic rock and the occasional rap song. “My favorite current groups are Coldplay and Outkast,” she said, “but I like dabbling into my dad’s old CD’s from the seventies and early eighties. I used to play the clarinet in junior high school, but I don’t play any instruments now. I think I would like to take up piano again now that I am older.” “I like mixing and listening to music,” Coreno said. “I enjoy anything that’s on the hit list, but my favorite is Pink Floyd. I’m also into a lot of club and techno music.”

Other than sports and music, Coreno enjoys spending time with friends and seeing movies. “Anything to do with spies, lots of action, and things blowing up,” he added. Hann-McCurdy enjoys watching movies, window-shopping, reading and going to museums and art galleries. “I am a fan of drama, documentaries and historical fiction,” she said. “I also like the occasional action movie. Just not horror movies. I get very scared.” She also reads a lot. “I will read anything except Harlequin romance novels and biographies,” she said. “I like classics, historical fiction and non-fiction, psychological thrillers, and political fiction.”

Coreno collects sports hats and those little kinder surprise toys, while Hann-McCurdy said she collects “rabbit figurines, stuffed rabbits, rabbit pictures, and basically anything bunny. I have stuffed pets. They are much easier to look after.” Both of the dancers also use their computers for schooling, keeping in touch with friends and family, and for keeping up with the news.

In the summer, they both cycle and roller blade for fun. Coreno also likes to play soccer and golf while Hann-McCurdy enjoys going to indoor rock-climbing walls once in a while. “As long as I don’t look down, they are quite fun,” she laughed.

They also enjoy the travels that come with skating. “I enjoy traveling,” Coreno said, “although the trips I go on are usually more stressful then just staying home because of the competitions. My favorite trip was with my family a long time ago in Florida when I was ten, although I was too short at the time to go on any of the big rides at Disney World.” “I like traveling a lot,” Hann-McCurdy added. “My family has moved a lot because my dad is in the military. I enjoyed living in St. John’s, Newfoundland, and Mahone Bay, Nova Scotia. We took a trip to Florida once when I was about eight and we were swimming at the beach and there was dolphin really close to my sister in the Gulf of Mexico, It was so cool to see. We also saw alligators and the tiny lizards that are everywhere in Florida, including all over the outside of my grandparents’ house.” She wants to visit Ireland and India, while he would like to see London and Hawaii.

Coreno is currently in a distance education program through Laurier University. He enjoys business, law and art. “Right now I am simply trying to stay involved with school,” he said. “After skating I hope to become a lawyer, but still keep a foot in skating somehow, maybe as a choreographer.” Hann-McCurdy is a senior in high school, doing her schoolwork online at the Virtual Learning Center. Her favorite subjects are English, history, biology, and law. She plans to go to university but has not yet decided on a career. “I have many different interests, including law, literature and psychology, but I have yet to make up my mind about what career path I will take when I am finished skating,” she stated.