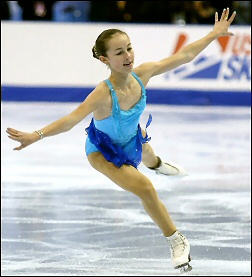 USA’s Kimberly Meissner has moved rapidly up the figure skating ladder since she burst on the scene in her first U.S. national event by winning the novice ladies title in 2003. Meissner, who prefers to be called Kimmie, followed up with a win at the 2004 U. S. Nationals in junior ladies. This season, she’ll be moving to seniors at Nationals with two seasons to go before the 2006 Olympic Games in Torino, Italy. Meissner will be 16 in Torino, about the same age as recent Olympians Tara Lipinski and Sarah Hughes. But if she doesn’t make it into 2006, the talented youngster plans to stay around for at least the 2010 Olympics and maybe beyond. “I want to skate for a long time,” she said, “until I can’t skate any more.”

Meissner is still too young to do any international senior events, however, she won both the short and long programs at the Liberty Open in Delaware. Earlier this month, she finished fifth at the Campbell’s International Figure Skating Classic.

Meissner was one of 27 ladies who competed in the eight-event Junior Grand Prix beginning in Courchevel, France  in August and ending in Miercurea Ciuc, Romania in October. She earned a total of 26 points, giving her the fourth of only eight slots for the upcoming Junior Grand Prix Final.

The 15-year-old had a very successful international season last year, placing second at the Sofia Cup in Bulgaria, first at Skate Bled in Slovenia, third at the Triglav Trophy and fifth at the Junior Grand Prix Final in Malmo, Sweden. “My goals changed through the season,” she noted. “First I just wanted to do well at my first international and Nationals, then I wanted to make the Junior Grand Prix Final and skate my best there, and then I wanted to go to Junior Worlds and skate well there.” Meissner exceeded her goals each time, ending the season by placing second at her first Junior Worlds. “I wanted to be in the top ten,” Meissner said, “but I didn’t expect to be second. Those were the highest marks in my career. My best before was a 5.5.”

Meissner began skating when she was six years old. “My older brothers all played hockey and I was at the rink with them,” she stated. “I had seen figure skating on television and wanted to try it.” She was actually more involved in ballet when she was younger, starting when she was four. “I used to do all the recitals and travel to the competitions,” she noted, ” but once I started skating, I liked skating more. I danced in the Nutcracker and some other ballets, but not Swan Lake.”

The petite brunette landed her first triple jump, a triple salchow, six years after she first stepped on the ice, but calls the triple lutz her favorite jump. “World Juniors was the first time I landed a triple lutz-triple toe in competition,” noted Meissner, who has also been working extensively with the triple Axel. “This year, I want to make my skating a lot better,” she said. “I want to have a good triple Axel and maybe a quad later.”

Pam Gregory has coached Meissner for the past four years at the University of Delaware in Newark. “Kimmie’s a great kid,” Gregory stated. “She’s a hard worker and has a lot of star quality. She’s really good at stepping up when the pressure is on.” Meissner trains for two hours a day on ice and an hour a day off ice, five days a week. Her off ice routine includes weights, cardiovascular work, jazz and modern dance, and ballet. Each day, she does a complete run-through of her short and long programs.

Gregory usually selects the music for Meissner’s programs and usually changes both each year. “I have quite a collection of CDs to pick from,” Gregory explained. “I like to skate to fast, big music,” Meissner said, “but I just listen to radio music outside.” This season, Meissner is using Reverie by Debussy for the short and Daphnis and Chloe by Ravel for the long.

Although she’s only traveled to a few events, she most enjoyed Sweden and hopes to go to Japan.

Meissner collects charms and anything with stars and keeps the stuffed animals she receives all over her house. Other than skating, the only sport that she participates in is snow skiing. “I like to draw and read and play with my cat,” she said of her other off ice activities. “I draw horses and other animals in the summer, but not people because I get the faces all funny. I like to read fantasy books like Harry Potter and Lord of the Rings. I like fantasy movies, but also real life movies.”

Meissner attends a public high school in Maryland and her favorite subject is English. “I plan to go to college,” she said, “but I don’t know what to study. I like marine biology. I really want to go on tour with Stars on Ice when I finish competing.”