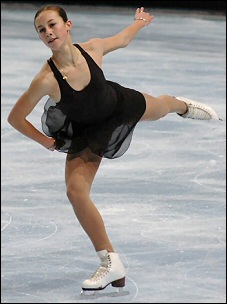 World Champion Kimmie Meissner pulled out all of the stops this afternoon to pull up from sixth place after a disappointing short program. In her first appearance at this event, the 17-year-old clinched the gold medal with a performance that brought the crowd to its feet.

“This title means a lot to me,” said Meissner. “It’s my first Four Continents and I’m excited to have the title now. I felt really excited to go out there and do a good program.”

Skating to Galicie Flamenco, Meissner opened her program with a triple lutz-triple toe combination – the only triple-triple combination of the night, and later landed another triple Lutz near the end of her routine.

“It felt good to land those Lutzes,” said Meissner. “The last year has been like a whirlwind. Making the Olympics was a big goal of mine and to achieve that was great and then to win Worlds just added to the excitement.”

The 17-year-old opted not to attempt the triple Axel, choosing instead to earn credit for a clean double. Almost immediately, the improvement in presentation showed in a much more mature Meissner, even from the U.S. Championships just two weeks ago.

Although Meissner singled a planned triple flip, the 2006 Skate America silver medalist otherwise landed a total of five clean triple jumps, as well as a double Axel-double toe loop-double loop combination at the end of her program, which drew excited screams from the audience.

“I like the long program a lot better [than the short] because I know that there are a lot more jumps,” explained Meissner. “There’s a lot of opportunity to earn a lot of points. I have been training really hard and I was very determined to skate well today.”

The giggly native of Bel Air, Md. will continue to work on triple-triple combinations as well as the triple Axel in preparation for the upcoming World Championships in Tokyo. “They were really good this week,” she relayed. “I landed a bunch of them in practice. If I can get it trained and ready, you will definitely see it at Worlds.”

Teammate Emily Hughes landed six triple jumps to Meissner’s five, but was unable to convert either of her two triple lutzes or triple flips into combination jumps. As a result, the second of each jump combination type was downgraded, receiving only 80 percent of the raw score for each jump.

“I know I did miss a few things out there like combinations,” agreed Hughes. “But I still got all of the triples and I’m really happy about that.”

Skating to a personal best score, Hughes displayed speed and her usual joie de vivre in her routine to music from the ballet Sylvia by Delibes. Her total score of 166.60 points was just 0.70 better than Joannie Rochette, the leader going in to the free skate, forcing the Canadian champion to settle for the bronze medal.

“In practice I felt a little more tired than I did out there,” admitted Hughes, “but every time I go out there, I want to do a clean performance. This is a first for me for the season, so I’m really happy for that and hoping to build on it.”

Hughes said that now that she has met her goal of skating a clean long program, she will go home and train her program to increase her difficulty in order to be more competitive with the top skaters at Worlds.

“The next step would be a triple-triple,” Hughes offered.

Rochette skated a flat program to selections from the Don Juan soundtrack in which she singled both of her attempts at the Lutz, and did not perform with her usual verve and artistic punch.

“Of course I was holding back a little bit too much,” confessed Rochette. “The Lutz was just a technical mistake today, but I’m glad I did the loop. It was the first time this season that I did it.”

Rochette had a promising opening to her free skate, landing a triple flip-double toe loop-double loop combination to start, but then immediately popped her first attempt at the Lutz. The four-time Canadian champ landed a total of four triple jumps, two of which were in sequence or combination, to score 118.26 points.

The 2006 Skate Canada Champion was pleased with landing the triple loop in today’s competition, her first of the season, and looks forward to working hard on her preparation leading up to the World Championships in March.

“Just before Worlds, this (bronze medal) helps me with my confidence,” said Rochette. “Having more time will help me to prepare more. There are plenty of opportunities to score points in the free skate, but in the short program, a triple-triple would really make a difference. I will work on that.”

In fourth was a very happy Aki Sawada, who placed sixth at the Japanese Championships in December. The 18-year-old, who stood in third after the short, attempted a technically demanding program, landing six clean triple jumps. However, the new-to-the senior circuit skater had neither the polish nor the speed and flow of those on the podium. A planned triple loop that Sawada downgraded to a double, and a spin that never really got going, were Sawada’s only mistakes in an otherwise enchanting performance.

Still, the 2006-07 Junior Grand Prix finalist achieved a new personal best in the free skate, placing higher overall than that of her more-seasoned teammate, Yoshie Onda.

“I’m sorry to have made a mistake on the spin and the loop,” apologized Sawada. “If I had done that, I might have gotten 107 points which was my goal today. I’m
pretty happy because I achieved a personal best. I was able to finish this season with a smile.”

After a strong opening to her Sabrina program in which she hit her Lutz combination, Czisny underrotated her triple flip in combination with a clean double loop and fell on both the solo triple flip and triple lutz attempts. In addition, the U.S. National bronze medalist incurred a timing deduction to place only sixth in the free skate.

In the end, it was Czisny’s trademark difficult spins that kept her in the top five, totaling over half of her points for the technical score.

“I was a little disappointed in my long program here,” said the 19-year-old. “We only had a couple of days to get ready for this competition, so it was a littler more difficult in that respect.”

Japan’s Fumie Suguri withdrew from today’s competition with a strained neck muscle after skating to a dismal twelfth place finish in the short program.

Teammate Yoshie Onda had a brilliant skate that was marked as the fourth best of
the night. The 2006 Cup of Russia bronze medalist, who stood in seventh after the short, moved up to sixth overall.

Canadian Leslie Hawker, in 16th place after the short program, landed five clean triples and moved up to seventh overall after earning a new personal best in her free skate. The Canadian bronze medalist was pleased with her performance, and looks forward to competing next season.

“This program felt like normal,” said Hawker.”My goal is to get them to always feel like normal and make the World Team next season.”

Dubé, who is recovering from surgery to repair a laceration she sustained Thursday afternoon during the pairs free skate, was released from the hospital Friday afternoon after recovering nicely from her Thursday evening surgery.

The accident happened during side-by-side flying camel spins when Davison’s blade sliced Dubé’s left cheek and the left portion of her nose.

“I just want to say to everyone that I’m fine and that everything with my surgery went really well,” said Dubé. “I’m really happy with what they did with my face.”

Both skaters repeatedly expressed heart-felt gratitude and thanks to everyone for their support.

Despite the scary incident, the Canadian Champions are looking forward to Worlds and plan to resume practice in 10 days if Dubé has healed.

At the hospital, Dubé was asked by Barabé if she’d be scared to do the spin again. Dubé replied, “No, but I’m not going to be that close.” Bryce said, “Yes, I’m scared.”

“I didn’t learn too much,” said Davison when asked what he learned his partner. “It definitely reaffirmed a few things that I already knew about her: that she is super tough, strong, and that she’s an incredible person and an incredible pairs skater and my best friend.”

Dubé wants to view footage of the accident.

“I knew she was tough because she’s missing a finger,” said Barabé. “She’s had surgery on both knees. She had the fall this summer at a summer competition and she got back up right away. Four minutes after she woke up from surgery, when asked ‘How did Cynthia do?’ and ‘Who won the pairs?’

And then, ‘Where would I have ended up if I did a clean program?’