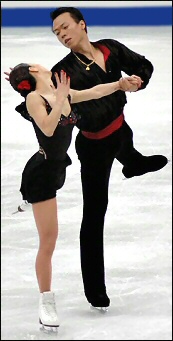 China’s Xue Shen (28) and Hongbo Zhao (33) skated a beautiful program to Romanza by Bacarisse that showcased both the team’s world-class athleticism and their strong, yet balletic style. The two-time and reigning Olympic bronze medalists opened with a set of side-by-side triple toe loops followed by their renown gigantic throw triple loop that elicited audible gasps from the audience.

The only shortcoming in the program was a crashy landing on the split triple twist which did not have the team’s usual amplitude. Despite the mistake, the 69.29 points they earned were better than their closest competitors by almost four points.

“It was not a big deal,” Shen said of the flawed triple twist, “We were conservative about it. I regret that, because our score would have been higher.”

Shen and Zhao also plan to ‘retire’ after the upcoming World Championships in Tokyo.”We will leave the competition (Worlds) and if we are feeling good in 2009, we might try to compete in the [2010] Olympics,” offered Shen.

Skating to O Doux Printemps d’ Autrefois by Jules Massenet, Qing Pang (27) and Jian Tong (27) executed each element cleanly but tentatively. The lone glitch in the program was the transition into the pairs spin which resulted in a loss of unison, but the team quickly corrected the miscue. Their routine, highlighted by the team’s usual high-flying split triple twist and clean side-by-side triple toe loops, was awarded a score of 65.80 points for a second place finish behind their teammates.

The reigning World Champions were cautiously pleased with their performance. “It was a quite good performance,” said Pang. “There were still some little errors, and we feel that the high altitude is affecting us.”

Tong added that their individual health issues have been a concern as well. “Coming to this competition is a high point for us, but we don’t like being in this shape for this competition,” he explained.

Pang, who suffers from albuminuria – a somewhat obscure kidney condition – is unable to train for more than an hour without taking a break. “It is better than it was, but I’m still not fully recovered,” she offered. “My stamina is still not so good.”

“Right now our energy is a little low and the high altitude has affected us,” continued Tong. “We need more practice and hopefully at the World Championships we will do a lot better.”

In third place are the two-time and reigning U.S. National silver medalists, Rena Inoue (30) and John Baldwin (33). The team opened their Soul of Spain routine with cleanly executed side-by-side double Axels, however Inoue then pinched forward on the landing of a throw triple Axel. The defending champions earned a Level 4 on each of their graded elements except for their spiral sequence (Level 3), and earned a new personal best of 61.73 points.

“I don’t really understand why we received a Level 3,” said Baldwin of the spiral sequence. “That element has been Level 4 for us all season. The throw triple Axel was something we’ve been able to do since last year, so it wasn’t shocking (to land it today), but it’s always exciting to land it.”

Known by most as an ‘ice mathematician’, Baldwin is always on the lookout for ways to earn more points. “I want to be aggressive in the long program and bring those levels up,” he stated, adding that it was an honor to be in the last group with two World Champions.

Canada’s Valerie Marcoux (26) and Craig Buntin (26) opened with a very strong set of side-by-side triple toe loops and a good double twist, but had a position problem in the entrance of a lift in which Marcoux struggled to maintain a clean position. The mistake caused the team to reshape the end of their program to Cherry Pink and Apple Blossom White, resulting in losing levels on the death spiral.

“We had a little less time on the death spiral,” explained Buntin, “so we had to take a revolution out of it.”

Nevertheless, the Canadian silver medalists were excited to skate a fall-free short program and currently stand in fourth place heading into the free skate. With 60.43 points, the team is within striking distance of the podium.

“I could feel it was wrong when I took off,” said Langlois of the fall. “I couldn’t hang on to it.”

USA’s Naomi Nari Nam (21) and Themi Leftheris (24) had a commendable showing at their first ISU Championships, placing sixth. The team executed clean side-by-side triple toe loops to start, but then had small errors on both the throw triple loop and the death spiral.

Teammates Brooke Castille (20) and Ben Okolski (22) were credited only with single side-by-side Axels as Castille popped hers. The newly-crowned U.S. Champions earned a new personal best of 55.12 points for a seventh place finish.