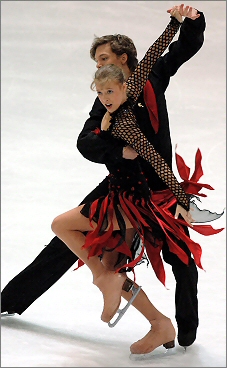 Ekaterina Bobrova (16) and Dmitri Soloviev (17) of Russia perform a tango to La Passion for their Original Dance.

The 2007 ISU World Junior Figure Skating Championships continued Thursday with the Original Dance (OD) which the dance for the 2006-07 season is the “Tango”. Couples can choose one to three tango rhythms. If two rhythms are used, one can be repeated. Vocals are permitted.

Overnight leaders Ekaterina Bobrova (16) and Dmitri Soloviev (17) of Russia produced an intricate tango to La Passion, which had very good speed and flow and showed great expression throughout.

The 2006-07 JGP Final bronze medalists started with a difficult midline step sequence with contained perfectly synchronized level 4 twizzles, followed by a level 4 straight line lift and dance spin. Their level 3 diagonal steps were skated in very close holds, separating only during the minimum required for the twizzles. The team concluded the dance with a fast level 4 rotational lift.

The 2007 Russian Junior Champions placed first in the OD with a new personal best of 54.13, and maintained first overall with a total of 89.65 points.

“We are very pleased and we did everything we wanted to do and tried our best,” said Bobrova.

Bobrova stated that they liked the tango because it’s passionate, despite it being considered an ‘adult’ dance. “It is very interesting and serious. Some couples have a slow tango and others go for a fast tango. Both are beautiful. Maybe for some of the juniors it is difficult to express the tango because some are too young to understand what passion is, but we still like it a lot.”

USA’s Emily Samuelson (16) and Evan Bates (18), who stood in fourth after the CD, placed second in the OD with a new personal best of 53.98, and are now currently second overall with a total of 85.16 points.

The 2007 US Junior Champions skated an expressive romantic tango tango to Quejas de Bandoneón in close holds with perfectly matching body lines and extension, receiving a level 4 with +GOE for all of their elements. The cadence of their midline step sequence and synchronized twizzles reflected the changes in the tempo of the music, and their diagonal step sequence accented every nuance and beat of the music. During the straight line lift, Samuelson changed positions while Bates held a spread eagle position, and their spin included changes of position for both of them.

Bates agreed. When asked how it felt to receive a level for on all elements he said: “Achieving level 4 was a bonus for us today. We weren’t expecting it, but we know our coaches studied the rules very thoroughly so we felt well-prepared. We got a level 4 on all our elements in our free dance at nationals and were close in our OD. To be able to perform everything so cleanly here is also very pleasing to us.”

Samuelson said that they owed a lot to their coaches. “We practiced expressions [in our tango] every single day of the week, [as well as] every little nuance to make the character as passionate as possible. [The coaches] had us watch DVDs that came from Argentina and we had a ballroom dance instructor that worked with us as well.”

Estonia’s Grethe Grünberg (18) and Kristian Rand (19), who stood in second after the CD, placed third in the OD and overall with 82.87 points.

The Estonian Champions produced a tango to Quejas de Bandoneón which was smooth and expressive – not the usual over-the-top angry expression, while displaying good flow and very good speed throughout. Grünberg wasn’t steady on a few of the steps during the level 3 midline step sequence, however, the team produced a level 4 twizzle sequence which was quite fast, and their level four straight line lift was smooth, showing good changes of position.

The 2006 JGP Spin of Norway Champions also executed a dance spin that had good speed with Grünberg in a lovely ½ Biellmann position, as well as an intricate level 3 diagonal step sequence which captured the lilt of music. The team concluded with a nice level 4 one-armed rotational lift.

“I thought that it was a good performance and a good original dance, except the middle step sequence where I made some small mistakes,” admitted Grünberg. “But overall it was good.”

“We did our personal best,” added Rand, “and I did enjoy skating, especially with my partner. I did like the crowd. I saw some Estonian flags – thank you for that.”

Grünberg doesn’t feel that the tango, as an ‘adult dance’, was a problem for them. “I personally enjoy it. I think this is one of my favorite programs ever.”

Rand agreed, adding jokingly: “I want to thank my coach [for] making me an adult.”

During a warm-up, Kaitlyn Weaver (17) of Canada dislocated her left shoulder and a doctor had to pop it back in place. It’s the same arm she uses to hang onto her partner, Andrew Poje (20), during a fast rotational lift at the end of their program.

The 2007 Canadian bronze medalists, who stood in sixth after the CD, skated a sophisticated tango to Jeanne y Paul and Verano Porteno, displaying great expression and good speed to start. The team produced a fast and smooth midline step sequence, good level four twizzles, and a diagonal step sequence which was smooth and romantic but which became fiery as the music became more passionate.

In their first season together, the Canadians placed fourth in the OD with a new personal best of 49.03, moving up to fourth overall with a total of 79.46 points.

USA’s Madison Hubbell (16) and Keiffer Hubbell (18), who stood in 12th after the CD, placed fifth in the OD and are currently ninth overall.

The brother-sister team skated a soft, romantic tango with level 3 step sequences, as well as level 4 lifts and twizzles, which made up some of the ground they lost with the fall in the CD.

“We had a hard week,” confessed Madison, “especially after the CD. My partner is not feeling all that well, but we were just going out determined to try our best. There were a few small mistakes, but it was a good [OD] though.”

Madison also stated that they didn’t skate their best in the CD. “Our results obviously showed [that], but I wasn’t too worried because I knew that we could skate a lot better. It almost made us more determined to come and show what we can do and show that we can skate a lot better than we did the day before yesterday.”

Russia’s Kristina Gorshkova (18) and Vitali Butikov (19), who stood in third after the CD, placed eighth in the OD, slipping to fifth overall with 77.47 points.

The 2007 Russian Junior bronze medalists had a good start in their tango to La Cumparsita, which featured a nice curve lift and matching twizzles, however, they lost control of a spin in which Butikov touched down with his free leg. The element was subsequently graded a level 1.

Elodie Brouiller (19) and Benoit Richaud (19) of France, who were eighth after the CD, placed sixth in the OD with new personal best of 47.88, and are now in sixth place overall.

Joanna Lenko (14) and Mitchell Islam (17) of Canada withdrew from the competition after the OD as Lenko has been battling a virus for the past few weeks.

The team had to pause during their program so Lenko could get ‘her lungs back’.

“It seems to go in cycles,” explained Islam. “We’ve had a tough time making it through a program. She is really ill.”

The event continues Thursday with the Ladies’ Short Program and the Free Dance.