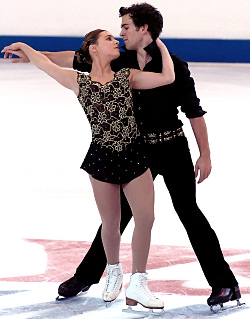 Canadians Jessica Dube (20) and Bryce Davison (21) took the lead after the short.

In a small field of competitors, Canadians Jessica Dube and Bryce Davison took the lead after the short despite skating an error-laden program. The tandem barely edged out top-seeded Qing Pang and Jian Tong of China, who also had a disappointing skate.

Performing to Galicia Flamenco by Gino D’Auri, Dube stepped out of the opening side-by-side triple Salchows and later put a hand down on a throw triple loop. However, the team earn positive grades of execution for their split double twist with a lutz entry, a lift, and two spins.

Despite the mistakes, the Canadian champions earned superior levels on many of their other elements which allowed them to slip past the Chinese by .48 of a point with a new personal best of 60.80 points.

“Our goal coming out was to hit the mark of 60 points, explained Davison, “so we were pretty happy with it. It wasn’t perfect. We had a couple shaky spots, but overall we are happy with what we did.”

Until now, the Canadians were mostly known as the team that had the horrific accident at last year’s Four Continents Championships when Davison’s blade sliced Dube’s face during a side-by-side spin. Fully recovered from the accident, Dube’s only reminder of the accident, physical or mental, is a faint scar stretching from her nose to midway on her cheek.

“Every time I have an injury and get back from it, I put it to the side and move forward to the next thing,” Dube shared. “So I guess it is what I always strive to do with everything that happens to me so that I can just do my job.”

Absent from Pang and Tong’s program was their trademark power and speed that historically has carried them through to great scores in the short program. After an uncharacteristic step-out on the opening side-by-side triple toeloops by Tong, the duo executed their high flying split triple twist from a lutz entry that earned high grades of execution but only a level one in difficulty.

The program began to noticeably slow down after that, perhaps in part to the sedate music selection of Massenet’s O Doux Printemps d’Autrefois, but mostly because the team suffered from fatigue after having arrived late to the competition.

“We just arrived yesterday at 4 o’clock,” explained Tong. “We are very tired, and so today it was not good.”

In addition to their split twist, Pang and Tong earned level one grades of execution for their circular steps and combination spin, which added to their scoring woes and allowed the Canadians to slip by for the victory. It should be noted, however, that the Chinese team’s group 5 Axel lasso lift was the highest scoring element of the competition (7.60 points). The current World silver medalists currently sit in a very close second with 60.32 points.

In third place and skating to an elegant program to Francis Lai’s Love Story, were Russia’s Vera Bazarova and Yuri Larionov. The pair, who is making their Grand Prix debut at this event, skated with the traditional elegance and classical style reminiscent of many of the former Russian Olympic Champions. In doing so, Bazarova and Larionov won the hearts of the audience with the only clean program of the evening.

Though the elements were beautiful to look at, the 2007 Junior World silver medalists earned only level one grades of execution (GoE) on three different elements for a personal best score of 56.76.

“What we did today for this competition was okay,” proclaimed Larionov through an interpreter. “We did everything our coach told us to do.”

But the team understands that they need to execute more difficult elements to be more competitive on the senior level.

“Our coach told us not to try more than we can do and not attempt what we could not,” admitted Larionov. “We are happy with that.”

Finishing in a distant fourth place were Americans Amanda Evora and Mark Ladwig who skated an innovative, yet almost impossible program to Stray Cat Strut, earning a new personal best score of 46.18 points despite two deductions.

The 2007 Nebelhorn Trophy bronze medalists, who train in Florida, opened with a flawed split triple twist from a lutz entry, but immediately went into their group 5 Axel lasso lift which earned a level 4 from the Technical Specialist. Evora completed the revolutions on an attempted throw triple Lutz, but lost the edge on the landing, and the team transitioned directly into a downgraded set of side-by-side triple Salchows that finished with Ladwig’s behind landing on the ice.

Even with those mistakes, the program was a crowd pleaser that demonstrated a high level of attention to detail. This enabled Evora and Ladwig to stay ahead of teammates Meeran Trombley and Laureano Ibarra who are currently fifth (45.48 points).

Trombley and Ibarra, in just their second season together, were a late replacement to the event to fill in for Naomi Nari Nam and Themistocles Leftheris who withdrew due to injury.

U.S. pairs champions Brooke Castile and Ben Okolski also withdrew from the event due to a foot injury.

“They are very upset that they will not be able to compete at Skate America and Skate Canada, but they will be healthy and ready to go for the U.S. Championships,” said coach Johnny Johns.