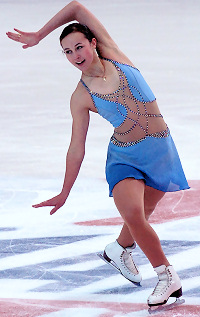 The ladies event was a highly anticipated competition that included the debut of current Junior World Champion Caroline Zhang of the United States on the senior circuit, as well as an exciting meeting of current World Champion Miki Ando from Japan and former World Champion Kimmie Meissner of the USA.

When the skating was complete, it was Meissner who sat atop the leader board with a total of 59.24 points, far off of her personal best of 64.67, but enough to fend off a strong challenge by Ando and Zhang.

Meissner was able to capitalize on small mistakes from her fellow competitors even as she skated a program with similar technical content. In fact, only three-tenths of a point separated the top free in the technical elements, but it was Meissner’s command of the program components that catapulted her into the lead.

The U.S. champion used last year’s music The Feeling Begins by Peter Gabriel to present a more sophisticated and physically mature program than in previous seasons. Meissner also included a credible attempt at a triple lutz-triple toeloop combination, but it was downgraded on the second jump. Additionally, the 18-year-old was penalized with a negative GoE for a last minute change of edge on her solo triple flip jump.

“I have a lot of things I know that I have to work on,” said an optimistic Meissner. “But I am excited that I put out a good program that I can be proud of this early in the season. Meissner earned level fours on her opening spiral sequence and her flying sit spin, but was disappointed with her low levels on her step sequences.

“The footwork bugs me,” giggled a frustrated Meissner. “I guess that I just have to put some more turns in.”

Ando began her Samson and Delilah program with a gem of a triple lutz-double loop combination, and seemed to be heading for the overnight lead in the competition. However, the defending champion fell late in her straight line step sequence which not only gave her a required deduction, but also resulted in a level one with negative GoEs.

“The mistake on the footwork was stupid,” said the 19-year-old. “I never do that in practice, so I was surprised when it happened.”

Ando, who trains with Nikolai Morozov in Hackensack, NJ, finished the short program in second place with a total of 56.58 points. The Japanese silver medalist is recovering from a shoulder injury that occurred earlier in the season at a competition in her home country.

“Because of my right shoulder injury, I had to make adjustments to my layback and some of my jumps,” relayed Ando. “Considering my condition right now, I think that I skated alright.”

Skating first of the main competitors, Zhang was able to live up to the expectations that the media has been placing on her since she won the junior worlds title last spring.

The 2006-07 Junior Grand Prix Final champion opened her program with a valiant attempt at a triple flip-triple toeloop combination, but it was downgraded to a double on the front half. On her next element, the triple lutz from footwork, Zhang was given negative GoEs and credited with a change of edge going into the jump (i.e. a “flutz”).

“I have been working on improving all of my jumps,” said the wide-eyed 14-year-old. “I haven’t been paying too much attention to making sure that I hold the edge on the Lutz since I have been here, but I will continue to try to improve it.”

Zhang presented her program to Spanish Gypsy by Ray De Tone with moves replete with a flexibility that is reminiscent of Sasha Cohen and with a steady maturity that belies her tender young age. She earned a total of 56.48 points for third place after the short.

Yale University freshman Emily Hughes of the U.S. had difficulty with her jumps and finished in a distant and disappointing fourth place.

“I thought that the jumps were there,” said Hughes. “I didn’t think that it was as bad as the scores indicated.”

Hughes later learned that her opening triple flip and her triple lutz on her combination were both downgraded by the Technical Caller. Hughes did, however, receive high levels on her spins and spiral sequence to give her a total of 47.66 for her program to George Gershwin’s I Got Rhythm.

“It’s been really hard (to balance school and skating),” admitted the U.S. silver medalist. “I am still trying to find my pace between the two. But I still love skating, and having such encouraging results last season is motivation for me to continue to find the balance in the two.”

Skating to Tchaikovski’s Romeo and Juliet, Asada made a mistake on her triple lutz-double toe combination, but executed everything else cleanly to earn 46.82 points in the short program.