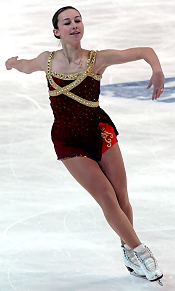 For the second day in a row, the winner of the freeskate at 2007 Skate America had to settle for the silver medal overall. Japan’s Miki Ando, who is currently nursing a shoulder injury, bested overnight leader Kimmie Meissner of the U.S. in tonight’s competition. However, she was unable to overcome the deficit that she accumulated in the short program and settled for the silver medal.

None of the ladies were able to skate a clean program, and many were penalized by a strict Technical Specialist who downgraded 22 triple jumps in just this portion of the competition among the 11 competitors.

Meissner, who skated a newly choreographed program to Puccini’s Nessun Dorma from Turandot, made mistakes on four jumps. In addition to stepping out of a triple salchow and popping her second triple Lutz into a single, the college freshman received downgrades on the second half of her opening triple flip-triple toeloop combination and her triple loop.

“The callers are just being stricter this year on everything,” announced Meissner. “You have to be sure that what you put into your programs is clean.”

The former World champ was able to land two clean triple jumps to go along with a double Axel-double toeloop-double loop combination to score a total of 103.99 points in the freeskate and a competition total of 163.23.

“I want to keep working to be more consistent,” Meissner declared. “I want to clean everything up and increase the levels, but I am happy to win my first Grand Prix and to hear the national anthem for the first time since I won Worlds.”

Ando also made mistakes in her program, but managed three clean triple jumps in her routine to Carmen by Bizet.

“It was pretty good, but I am not ready for competition,” shared Ando. “My training is not 100% due to my injury. I was happy to get second place.”

Ando outscored the winner by 1.32 points in the freeskate with a total of 105.31, and finished with 161.89 points overall. Like Meissner, Ando popped one jump into a single, but was only downgraded on one triple – her opening triple lutz. Additionally, the Japanese silver medalist earned a level one on her layback spin as she did in the short program.

“I am not able to do the positions that I need to be able to do in the layback because of my injury,” explained the 19-year-old. “I want to get healthy so my spins can get better.”

In her first senior competition, USA’s Caroline Zhang won the bronze medal with a performance that many thought was the best of the evening. However, Zhang was the biggest victim of the Technical Caller’s high standards in being downgraded in five of her triple jumps in the program. In all, Zhang was only credited with a clean triple flip and a handful of double jumps, but high levels and positive GoEs on her spins, as well as a fine set of program component scores, helped the current Junior World champion to keep her feet firmly planted on the podium.

“I didn’t expect a medal,” admitted the 14-year-old. “I was hoping for a top six placement. I can’t believe that I have a Grand Prix medal!”

Zhang’s competition total of 153.35 is far off of her personal best, but she took the scores in stride.

“I am going home to work on fixing the downgrades on everything, and I want to improve my footwork and spins.”

Finishing in fourth place was teammate Emily Hughes, who landed three clean triple jumps and earned generally high levels on her non-jumping elements to claim her highest placement at this competition.

“This is definitely vindicating for me,” said an excited Hughes who is juggling studies at Yale with her skating. “I wanted to be vindicated even more, but it is motivation for next time.”

Hughes skated a dramatic program to Carl Orff’s Carmina Burana, displaying a more sophisticated and stronger side to her skating. The U.S. silver medalist attributes her newfound maturity to her new training environment.

“Skating with Mark (Mitchell) and Peter (Johannson) has been a great experience for me,” said the 18-year-old. “Being there is helping with everything, and the longer I am there, the better everything is getting for me.”

Finishing in fifth place was Canadian Mira Leung who showcased a new look and better packaging to earn her highest finish in a Grand Prix event. Leung skated to music by Rachmaninov, landing four clean triple jumps, but received lower program component scores to keep her just out of reach of fourth place.

Georgian Elene Gedevanishvilli rebounded from a dismal short program to move up to five positions to sixth place overall.

Meissner picked up 15 points and is scheduled to compete at Trophy Eric Bompard in Paris, France next month.

Ando, who pocketed 13 points, will compete in her home country of Japan at the NHK Trophy, while Zhang (11 points) competes next at Cup of China.

The next Grand Prix figure skating event is Skate Canada which will be held next week in Quebec City, Canada.