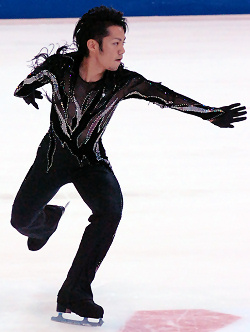 Japan's Daisuke Takahashi leads the men after his short program to a modern arrangement of Swan Lake.

The most anticipated match-up of the first day of men’s competition ended up being closer than expected, but between different competitors.

Initially, it was thought that this event would provide the backdrop for a fantastic show-down between Japan’s Daisuke Takahashi and current U.S. Champ Evan Lysacek. In reality, though, Takahashi ran away with the short program by skating a technically superior and highly entertaining program to a hip-hop version of Swan Lake, bettering Lysacek’s score by more than 12 points.

The true match-up now seems to be between Lysacek, Canada’s Patrick Chan, France’s Alban Preaubert, Russia’s Andrei Lutai, and USA’s Steven Carriere, who placed 2nd through 6th respectively. They are all separated by less than one point.

Takahashi skated a clean-as-a-whistle program complete with a triple Axel, triple flip-triple toeloop combination, and a triple lutz out of footwork. The current World silver medalist’s clean and interesting entrances and exits into each element earned him positive GoEs on each of the eight required elements. The highlight of the program was the audience-pleasing step sequences in which the 21-year-old combined skating elements and hip-hop dance elements.

“I went to hip-hop dance classes in Manhattan for two months to prepare for this program,” explained Takahashi.

Still, the current World silver medalist believes that his program could still use some work.

“Today’s performance was not bad for me,” declared Takahashi. “My spins need to be fixed, but for the first time competing this short program, I am happy. Being second [at Worlds] gave me a lot of confidence. I wanted to skate like a medalist here.”

Lysacek opened his Mask of Zorro program with a hard fall on the first half of a quadruple toe-triple toe combination that was downgraded to a failed triple jump by the Technical Specialist. Skating in his trademark black in a costume designed by fashionista Alexander McQueen, the two-time and current Four Continents champion skated the rest of his program with gusto and earned positive GoEs on each of the remaining seven required elements.

The 22-year-old later shared with the press that he will not be wearing black for his freeskate – a first since the 2003-04 season.

Lysacek finished second with 67.70 points – which probably resulted from not completing a combination jump that would have likely placed him within striking distance of Takahashi.

“I lost a lot of points with the quad because it was counted as a triple,” explained Lysacek. “I think that I executed the rest of the elements pretty well. I’m working hard, and I’m trying to take steps forward and grow as an athlete.”

In third place is Chan, the reigning Junior World Championship Silver Medalist, who landed his first triple Axel in competition tonight to earn him a personal best 67.47 points.

Skating to music from the Chinese soundtrack The Banquet, the 16-year-old’s lone mistake was doubling the back half of his planned triple flip-triple toeloop combination, but his youthful excitement pulled the crowd into his performance which allowed him to recover quickly.

“I was very happy with the triple Axel today,” gushed Chan. “The spins were a bit shaky for me, but I know that I can fix that with practice.”

Frenchman Preaubert is the comedian of figure skating, and did not disappoint on this night. In skating to music from The Addams Family soundtrack, Preaubert was able to hide his flaws in posture and skating basics with a talented blend of tongue-in-cheek choreography and technically difficult jumping passes. Though the 2006 Skate America bronze medalist landed four clean triples in his short program, he did not score as well on the other elements in his program – earning mostly level ones and twos – which was just enough to keep him behind Chan in the standings despite more difficult technical content.

Russian silver medalist Lutai performed a triple Axel, a quadruple toe-double toe combination, and a triple loop to finish in 5th place with the second highest technical marks of the night. However, his program component scores were significantly lower as he focused most of his energy on executing the jumps.

In sixth place in his first senior GP event, Carriere skated a pleasant program to music by Led Zeppelin with a personal best score of 66.85 points. Though he, like Chan, doubled the back half of his combination jump, Carriere earned the third highest program component scores of the competition to keep him in medal contention.

American Ryan Bradley struggled with his jumps tonight, doubling his Axel as well as only completing a triple toe-triple toeloop combination to finish in 8th place.