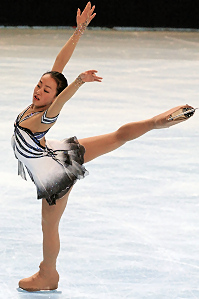 Mao Asada of Japan easily maintained her overnight lead to win the gold by over 21 points.

USA’s Kimmie Meissner won the silver, while teammate Ashley Wagner won the bronze with only a 0.11 point difference.

Asada had a rough stat when she underrotated and fell on a triple Axel attempt, but the 2007 World silver medalist earned level fours on most of her spins and finally received a level four for her spiral sequence.

The Japanese champion also finally received credit for her “trademark” triple flip-triple loop combination after both her attempts at Skate Canada were downgraded by the technical panel. With her effortless manner of executing the jumps, including a triple loop out of a spiral sequence. In the end, the 17-year-old placed first in the free skate with 122.90 (63.94/60.96) points for her cleverly improvised routine to Chopin’s Fantasie Impromtu.

“Today’s performance was very good,” said Asada. “I fell on the triple Axel, and I was nervous after that, but the next jump combination (triple flip-triple loop) was very strong.”

Wagner, who was fifth after the short, now has a reason to remember her first season as a Senior with the warm feelings.

Though the U.S. junior bronze medalist received a deduction for a wrong edge take- off on both of her Lutzes and two-footing the landing of a triple flip (in combination with a double loop), she otherwise produced three more triples and received a level three for all her spins.

Wagner was stunned at the end of her program, shaking her head in disbelief. The 2007 Junior World bronze medalist improved her previous personal best by almost three points, scoring 108.15 (57.35/50.80) points for a second place finish in the long. It was the best result by an American lady in the current GP season.

“I was living the moment,” explained Wagner, regarding her emotions at the end of her program. “I was so excited and happy.”

“At Skate Canada, I got on to my first practice, and I saw Mao (Asada) was there, and was really excited,” continued Wagner. “My coach told me, ‘calm down’. I kind of learned that you really need to stay focused, worry about yourself, just go out there and do what you can do.”

Teammate Meissner preserved her second place, winning the silver despite losing the long program to her compatriot.

The 2007 Skate America champion didn’t receive credit for her second jump on a triple flip-triple toeloop combination, which was also penalized for use of the wrong take-off edge. She also underrotated a triple Salchow, singled a Lutz, and fell on a triple loop.

“It was not my best,” admitted Meissner. “I started off pretty good, but I didn’t finish that way. I learned that I can perform a lot better than I have in the past years. My second mark was a lot higher and I was really happy about that, because we’ve been working on it.”

Despite the mistakes, the U.S. champion continued to present her program well, executing all the planned choreography with precision. While she earned high marks and levels for her spins, Meissner had to settle for a third place finish in the long with 102.76 (46.08/57.68) points for her efforts.

Meissner was happy about qualifying for the Grand Prix Final – a first for her.

“I am happy to go back to Torino (the site of the 2006 Olympic Winter Games),” said Meissner.”

In contrast, Canada’s Mira Leung executed five clean triples, which included two Lutzes and two flips, and was one of the few ladies that wasn’t penalized for using the wrong take-off edge. However, the Canadian silver medalist lacked the style and elegance of the other leading skaters and scored 100.79 (56.07/44.72) for a fourth place finish in the long. With a total score of 144.57, the 18-year-old moved up from seventh to fifth place overall.

Sarah Meier of Switzerland placed fifth in the long with 93.17 points, but with a total score of 147.15, found herself fighting to maintain fourth overall.

The 2007 European silver medalists appeared to have some problems with her leg as she kept massaging it throughout the warm up.

The Swiss champion made numerous awkward mistakes on most of her jumps, including a fall on a triple flip and triple Lutz (which didn’t leave the ice), suggesting that there may be a problem other than just a fit of nerves. The 23-year-old otherwise performed a beautiful and elegant program, but with no clean triples, she only earned 93.17 (39.85/54.32) points.

Asada picked up another 15 points for a total of 30, easily qualifying for the Grand Prix final.

Meissner, who now has a total of 28 points, will be joining Asada on Italian ice in next month.

Wagner earned 11 points at this event, and now has a total of 18 points.

Meier is slated to compete again in two weeks at NHK Trophy.