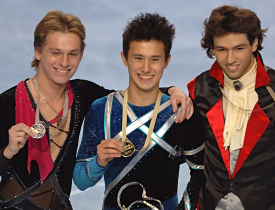 Patrick Chan of Canada was the winner in the Men’s event, while Russia’s Sergei Voronov rose to win the silver. Alban Preaubert of Franc slipped from first to third overall to settle for the bronze.

Chan opened his program to Vivaldi’s Four Seasons with an excellent triple Axel and triple flip-triple toeloop combination which earned him 2.20 bonus points for the quality of the execution. The 2007 Skate America bronze medalist proceeded to land three more triple jumps, each getting a positive GOEs, but then doubled a planned triple Salchow.

The current Junior World silver medalist recovered to land a strong double Axel and triple flip, but then fell on his final combination spin, somewhat marring the impression of his smooth skating and intricate program. Nevertheless, the 16-year-old, who was fifth at this event last year, placed first in the long with a score of scored 144.05 (72.85/72.70) points and overall (214.94 points) to win the gold.

“I really can’t explain what happened technically,” said Chan of the fall. “I just know that going into it I was fighting to stay upright. I was hoping not to fall, but unfortunately it happened. I landed the last triple flip at the end of the program, so that maybe overjoyed me a little because it was the closest thing to a clean program this season.”

“Coming to Trophée Bompard, I wasn’t rally expecting to make the Final or even win the competition,” added Chan. “I was really grateful to be second in the short. Coming into the long, I was pushing the envelope and trying to win. I just didn’t want go any lower than second.”

No one perhaps was more surprised by Voronov’s second place finish in the long program and silver medal than the Russian skater himself. The student of Alexei Urmanov still hasn’t completely recovered from the injury which forced him to withdraw from Skate Canada. He also had to remove triple Lutzes and triple flips from his routine as attempting this jumps are still too painful.

Although the Lutzes and flips were missing, the current Russian junior champion gained points for excellent execution of those jumps, as well as good spins and footwork, to earn a new personal best of 140.21 (71.71/68.50) points. With a total score of 208.91, the 20-year-old moved up from fourth to second overall to capture his first senior Grand Prix medal.

“To get a new personal best is super,” said a happy Voronov. “I have very positive feelings. This is my first (international) competition this season, and I didn’t expect this result. Now I will continue to work very hard and to improve.”

To the disappointment of the French fans, Preaubert slipped from first to third place overall (207.10 points) after placing third in the long.

Preaubert opened his “Dracula” routine with a solid quadruple toeloop, but then fell on triple flip and later singled a triple loop. The 2006 Trophee Eric Bompardée Eric Bompard silver medalist also received negative GOEs on some of his jumps as their landings were rather tight and lacked flow.

“I need a lot of energy in the beginning of my program,” explained Preaubert, “and I was a little tired at the end and I singled the loop.”

Despite getting rather higher levels on his spins, the 22-year-old scored only 67.90 points for technical elements. It was obvious that his interpretation of of the vampire theme impressed the judges less than his “Addams Family” routine yesterday as he gained only 67.50 points for the program components, finishing a distant third in long with 134.40 points.

“I am very happy with my performance,” said the Frenchman. “I did the most difficult program with a quad and two triple Axels, and it was the first time for me to do two triple Axels (and the quad) in one program. This gives me confidence for the future.”

Kevin van der Perren Belgium, who stood third after the short, placed fourth in the long and overall (204.75 points).

The 2007 European bronze medalist didn’t attempt a quad in his “Lawrence of Arabia” routine, and also fell on a triple Lutz attempt. However, he landed two solid triple-triple combinations, a triple flip, a triple Axel, and a triple loop. What probably hurt him most, was the lack of bonus points for the quality of execution on most of his elements.

While 25-year-old still scored higher in the technical elements than Preaubert, he lacked the connecting elements which put him at a disadvantage as far as program components score went, and he narrowly missed the third place in the free skate with 134.15 (70.95/64.20) points.

USA’s Ryan Bradley moved up from seventh to fifth place overall (191.32 points) after a strong performance to a Charlie Chaplin medley.

The 24-year-old also maintained the Chaplin character throughout the entire program, placing fifth in the long with 132.19 (70.69/61.50) points, beating his personal best by almost five points.

The European silver medalist experienced problems on most of his jumps, including stepping out of the opening quadruple toeloop, singling the toeloop in a planned triple flip-triple toeloop combination, and doubling a Lutz. However, the 21-year-old received high levels on his spins and a level three on a circular footwork sequence, scoring 132.14 (65.74/67.40) points for a sixth place finish in the long.

Chan, who earned 11 points at Skate America, now has a total of 26 points and has qualified for the Grand Prix Final (GPF) of Figure Skating.

This was a solo grand prix event for Voronov (13 points) who had to withdraw from Skate Canada due to injury.

Van der Perren added nine points to the 13 he picked up at Skate Canada for a total of 22 points.

While Preaubert picked up 11 points at this event, he only had seven from Skate America for a total of 18 points.

Verner will competes again in two weeks at NHK Trophy, but only earned five points at this event.